It will come as no surprise that according to the gas industry, the prospects for natural gas are bright.

However, in its new Medium and Long Term Natural Gas Outlook 2018, Cedigaz – a well-respected non-profit consultancy backed by gas companies from all over the world – has adjusted its demand growth outlook downward. Well, slightly downward.

Nevertheless, the projection of Cedigaz does not even come close to any credible “2-degree” scenario. Fossil fuels will still dominate the global energy mix. Below the prospects for the global energy mix as projected by Cedigaz in 2040 in this year’s report, compared to the prospects projected by Cedigaz in 2035 in last year’s report: 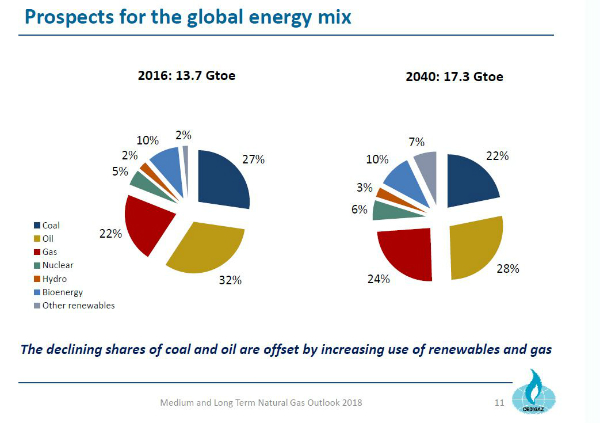 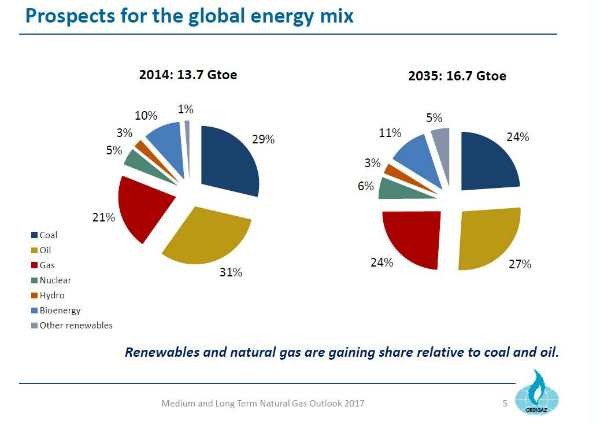 With its new projection, Cedigaz is a tiny bit more optimistic about renewables (which go from 5% to 7%) than comparable outlooks, e.g. from the IEA, BP and ExxonMobil, as is made clear in the following chart, which compares energy-related CO2 emissions from these outlooks: 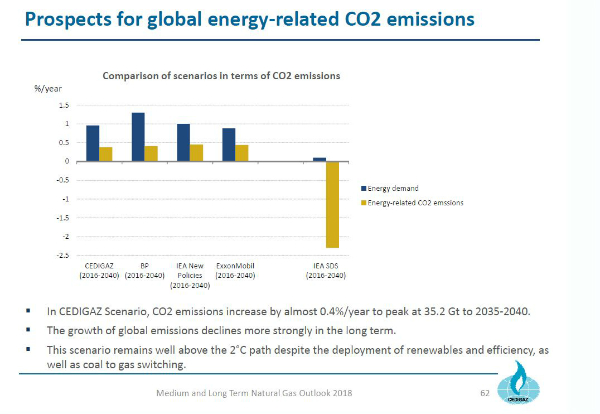 Note that the IEA SDS (sustainable development) scenario, shown at the right hand of the chart, is where emissions should go in a 2-degree scenario.

You can interpret this result in two ways: the Cedigaz outlook is realistic, and the SDS scenario is a pipe dream. Or you can say it is totally unrealistic, given what we know should be done. And also perhaps given the rapid expansion and cost reduction that we are seeing in renewables and EVs.

But it is not exactly clear on what assumptions the Cedigaz scenario is based. It mentions the following assumptions, but no further data are given:

For Europe, Cedigaz expects gas demand to grow by 0.7%/year to 2025, and then to decline by 0.3%/year to 2040. “EU gas consumption declines between 2025 and 2040 in a context of an accelerated deployment of renewables”, says the report, although it expects the use of gas in transport to quadruple.

The charts below show European prospects for gas supply, gas demand and the implications for gas dependency and the European energy mix in general: 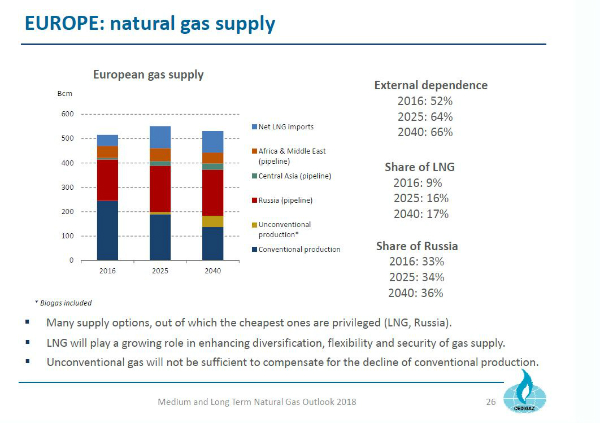 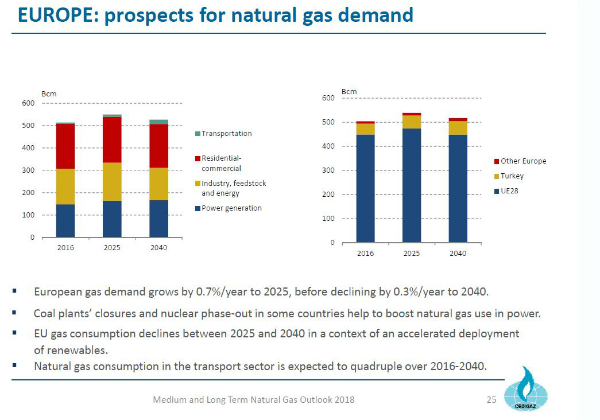 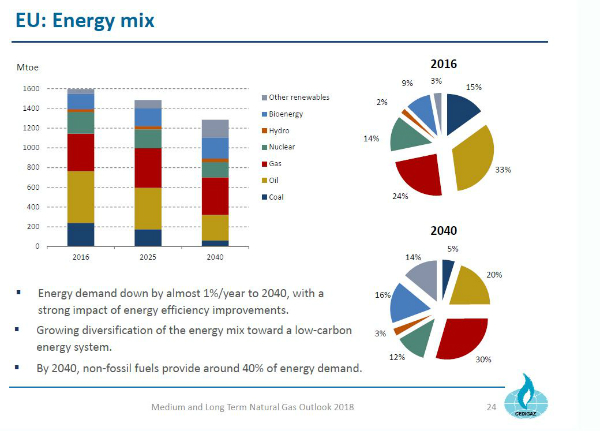 As it happens, the global gas industry just converged in Washington DC at the end of June at the World Gas Conference 2018 organized by the International Gas Union. Here the bright future of gas was not questioned.

On the contrary, the gas industry is not only optimistic about gas demand, but also about gas supply. Especially from the U.S. shale gas sector.

“Natural gas production from U.S. shale fields can keep growing for decades,”, noted the article, “giving Washington a powerful diplomatic tool to counter the geopolitical influence of other energy exporters such as Russia, industry executives and government officials said at a conference here.”

You will note that in Washington, anything to do with energy is immediately, automatically, translated into geopolitical, cold war terms. In this sense the U.S. is no different than Russia.

“Already the world’s largest gas producer, the United States can expand shale gas output another 60 percent in the coming decades, according to at least one estimate”, reports Reuters.

“We see a century of natural gas supply in U.S. shale,” Ryan Lance, chief executive of U.S. shale producer ConocoPhillips said. “Shale’s abundance is real and it’s not going away.”

“The United States currently produces about 72 billion cubic feet (bcf) of natural gas each day, a figure that is expected to grow by 7 bcf per day this year. And within 20 years, U.S. shale gas output should grow an additional 60 percent, according to a study from IHS Markit.”

The  Trump government will welcome the news. It has a global strategy of “energy dominance” based on expanded fossil fuel production and exports. “We’re sharing our energy value with the world,” Rick Perry, the U.S. secretary of energy, said at the Conference – although he probably did not mean they were giving it away for free.

However, Trump has also embarked on a trade war, which could hit U.S. shale gas exports, although this has not happened yet.

Reuters notes that the United States “is also boosting export capacity. LNG facilities from Cheniere Energy, Tellurian and others are either operating or planned across the U.S. Gulf Coast.”

“What the U.S. has done for the world with shale gas is given [giving] another form of affordable, competitive energy that can be relied upon,” said Jack Fusco, Cheniere’s CEO, said at the conference. I assume the rest of the world is supposed to be grateful!

Meanwhile, it doesn’t look like any other country will be able to replicate the U.S. shale gas success any time soon.

China, which has large shale gas deposits, has announced it plans double its shale gas production this year and “wants a five-fold increase in such production by 2020”, reports Natural Gas Intelligence.

However, the numbers are still very small. CNPC, the largest state-owned oil and gas producer, expects production of 5.6 bcm in 2018. It wants to reach 15 bcm in 2020. However, total gas production in China is around 150 bcm and consumption 240 bcm.

Total US gas production was 735 bcm last year, according to the BP Statistical Review of Energy. Note, though, that total US consumption was slightly higher: 740 bcm. So the U.S. is not even a net exporter of gas yet (nor of oil), despite Rick Perry’s claim that the Americans are “sharing their energy value with the rest of the world”…