Airline emissions: pressure is on to reduce, not offset

Oil and gas, shipping, utilities, automotive – the list of sectors that investors have turned their spotlight on to examine their impacts on climate change is growing all the time. The latest to come under pressure is aviation.

The airline sector currently accounts for 2% of global CO2 emissions and 12% of transport-related CO2 emissions and its share of total emissions is growing fast. In addition, aviation has climate impacts beyond CO2 emissions, such as the formation of contrails and clouds, which are likely to increase its impact significantly.

Yet, like shipping, it has got off fairly lightly so far because it is such an international sector that it is difficult to allocate responsibility for emissions to particular countries.

The industry also argues that there are limits to the actions it can take to cut emissions because of the laws of physics – no battery will ever be both powerful and light enough to get a long-haul aircraft off the ground. And even efforts to increase the use of biofuels in the sector, which have been going on for a number of years, have made only slow progress because, for understandable safety reasons, the testing process in aviation is lengthy and exhaustive. 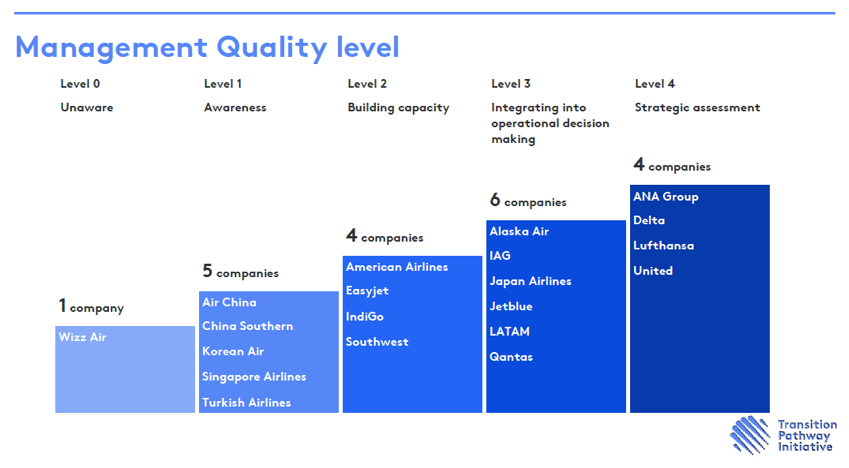 Despite all this, with solutions for emissions in the electricity and road transport sectors moving into the mainstream, investors have started to focus on the impacts of flying.

New research looking at 20 of the world’s largest listed airlines has found that their long-term targets fall below the Paris Agreement’s aim of limiting temperature rises to below 2°C, even though the sector has committed to carbon-neutral growth from 2020.

None of the 20 airlines has a clear target for how it will reduce its own flight emissions after 2025, says a study from the Transitional Pathway Initiative (TPI), backed by investors representing more than $13 trillion of assets, including Legal & General Investment Management, BNP Paribas and the UK Environment Agency Pension Fund. TPI found that airlines on average score lower than companies in the automotive and electricity sectors when it comes to dealing with climate change. 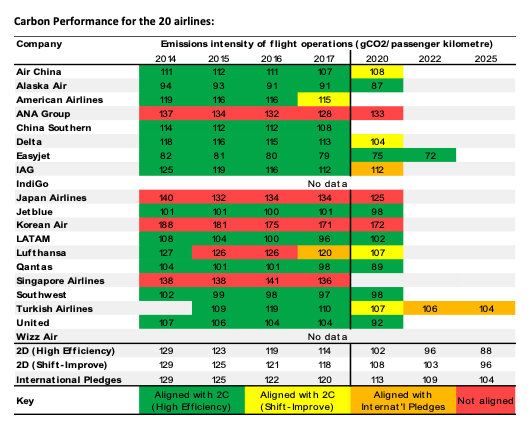 While many airlines have adopted industry targets to cut their net emissions, they will rely heavily on carbon offsets, through a scheme know as the Carbon Offsetting and Reduction Scheme for International Aviation (CORSIA), and it is not clear how they plan to reduce their own emissions, or by how much. Not only that, but there are fears that the industry will use old offsets left over from projects in the UN’s Clean Development Mechanism rather than new ones that create new emissions reductions.

Researchers from the New Climate Institute have urged the International Civil Aviation Organization (ICAO) to ban offsets issued before 2016 to ensure the sector really does reduce its emissions, while Carbon Market Watch calls for an even stricter requirement – that only projects started after 2020 should be eligible.

The TPI says airlines need to be more open about how much they are relying on offsets and acknowledge the additional impacts of flying at altitude such as contrails and cloud formation, which they do not currently include in their disclosures.

The study says the leading airlines when it comes to carbon management are Delta, United, Lufthansa and Japan’s ANA, but ANA, along with its Asian peers Japan Airlines, Korean Air and Singapore Airlines, is among the highest emitters. Only budget airline Easyjet has a CO2 emissions intensity below 2°C benchmarks after 2020.

Leaving aside the physical impacts of climate change that can affect the sector, such as more extreme weather, the recent experience of sectors such as coal, oil and gas and automotive shows that once investors get an industry in their sights, they can force companies to act.

“Investors have a clear message to the aviation sector: When it comes to carbon performance, they must be in it for the long haul. That means setting stretching emissions reduction targets to 2030 and beyond, and ending a reliance on offsetting” Faith Ward, Transition Pathways Initiative

Given that aviation emissions, and therefore exposures to climate risk, are set to grow, investors want companies to explain how they will manage the transition to a lower carbon future.

“Investors have a clear message to the aviation sector: When it comes to carbon performance, they must be in it for the long haul. That means setting stretching emissions reduction targets to 2030 and beyond, and ending a reliance on offsetting. It’s clear from TPI’s research that this is not currently the case,” said Faith Ward, co-chair of the Transition Pathway Initiative. “Offsetting is no substitute for a clear strategy to reduce emissions, and the IEA’s carbon budget for air transport excludes the use of offsets. The aviation sector is doing the basics when it comes to carbon performance, but investors are urging them to take more significant steps as they judge which airlines are most likely to survive the turbulence of the transition to a low carbon economy. “

The aviation industry has a range of options to tackle climate change, including improving energy efficiency, buying newer and cleaner aircraft and using more biofuels, added Helena Viñes Fiestas, deputy global head of Sustainability at BNP Paribas Asset Management. “As investors, we need clarity about the contribution each of these will make – and, critically, how much they will cost – if the sector is to make its contribution to the goals of the Paris Agreement.”

If the experience of other sectors is anything to go by, airlines are set to face a wave of pressure from investors in years to come, with shareholder resolutions calling for companies to disclose their climate risks and asking them to explain how they will deal them.

Read Mike’s report on how Airlines can cut emissions here