Alstom and Eversholt Rail breeze in on hydrogen trains

French rail multinational Alstom and UK rolling-stock operating company Eversholt Rail Group have unveiled the design for a new hydrogen fuel-cell locomotive for the UK. The fuel-cell trains – called ‘Breeze’ – will bring zero-emission rail transport to parts of the UK that, at the moment, still run on diesel. The first trains are scheduled to run in 2022.

The UK has rural and inter-urban routes where diesel trains must be used because the rails have not been electrified. The UK government has set out an ambition to eliminate diesel powered trains from the network by 2040. So, having ditched plans to electrify a number of sections of the network over cost concerns, hydrogen and battery technologies are thought to be critical to ensuring the 2040 target is met.

“Hydrogen train technology is an exciting innovation which has the potential to transform our railway, making journeys cleaner and greener by cutting CO2 emissions even further,” said Andrew Jones MP, UK Rail Minister.

The first trains are expected to run as early as 2022.

Diesel’s carbon emissions mean they must be made redundant. Hydrogen trains are equipped with fuel cells that produce electricity through a combination of hydrogen and oxygen, a process that leaves steam and water as the only emissions. Excess energy is stored in ion lithium batteries on board the train. One big advantage over pure battery-electric trains is the rapidity with which a hydrogen fuel cell vehicle can be ‘recharged’ – a couple of minutes (roughly the same as a petrol car) in comparison to several hours for a BEV.

The new train’s green credentials depend in part on the UK boosting its capacity to produce hydrogen from low emission, renewable energy, or potentially natural gas paired with carbon capture and storage. But the politicians are saying the right things. “The railways need to decarbonise and the government has rightly set out a goal to eliminate diesel rolling stock by 2040,” said Nick Crossfield, Alstom UK & Ireland managing director.

The world’s first hydrogen trains are already running in Germany

In September 2018 the world’s first hydrogen trains – Alstom’s Coradia iLint – went into service in Germany, where they now operate a regular passenger service on a daily basis. They have a range of 1,000km and are able to run for the whole day and charge up overnight. Alstom is set to deliver 14 more hydrogen trains and a refuelling depot in Lower Saxony by 2021.

There is growing interest in Alstom’s hydrogen technology worldwide, including in France where the President of the Occitane region, Carole Delga, recently announced a proposal to introduce the technology on trains there. 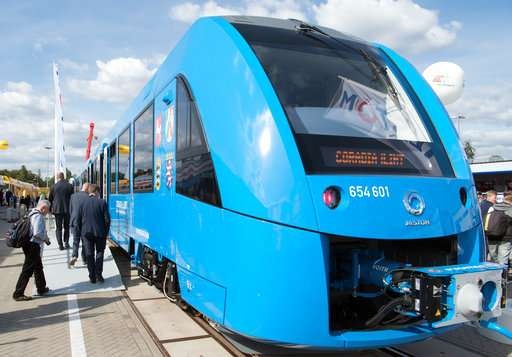 Not wanting to be left behind, the UK is talking up its own hydrogen energy future. “The UK is on track when it comes to growing a world-leading hydrogen economy, and through our modern Industrial Strategy we are providing £23 million to power our ambition to be the ‘go-to’ place for first-class hydrogen transport,” said Claire Perry MP, UK Minister for Energy and Clean Growth.

From horses to hydrogen

The UK is home to the first railway in the world to operate a freight and passenger service with steam traction. In 1821 George Stephenson, who had built several steam engines to work in the Killingworth coal mine, heard of Edward Pease’s intention of building a 13km line from Stockton on the coast to Darlington to exploit a rich vein of coal. Pease intended to use horse traction; Stephenson told Pease that a steam engine could pull 50 times the load that horses could on iron rails. Impressed, Pease agreed to let Stephenson equip his line.

On September 27, 1825, the first engine ran from Darlington to Stockton, preceded by a man on horse carrying a flag reading Periculum privatum utilitas publica (“The private danger is the public good”). When the horseman was out of the way, Stephenson opened the throttle and pulled his train of wagons carrying 450 persons at a speed of 24 km per hour.

From horses, to coal-fired steam, to diesel and overhead-electric…and now BEVs and Hydrogen. What a history we have in our European railways. 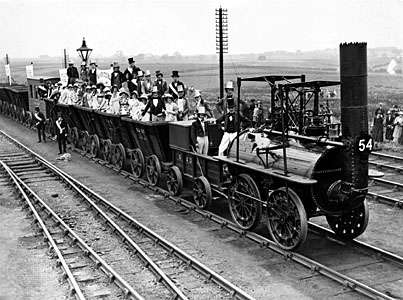 Stockton & Darlington Railway, picture taken to celebrate its centenary in 1925