Desert solar: the race to build the world’s biggest farm

When solar power was first conceived decades ago, the obvious locations for the farms were the world’s great deserts. Sure enough, the biggest farms are being built there.

In Egypt, the Benban Solar Park will produce enough electricity to power one million homes. It’s located in Egypt’s Western Desert, a sea of rock and sand that has been uninhabited for millennia, roughly the size of France. It will house 32 power stations across a 37km2 site, using 6 million solar panels, and will be capable of generating 1,650 megawatts of electricity. The first plant went live this month with a capacity of 64MW.

It represents a fundamental change in the way the country provides power to its people. For decades, the government has built and operated almost every power plant in the country. Until recently, the government was spending more on electricity subsidies than it was on education, health care, and social welfare combined. But in 2014, officials rolled out a World Bank Group-supported program designed to reform the power sector and encourage private companies to contribute to national growth and development.

The World Bank provided a $3 billion loan, as well as the framework and financing for the Benban project. Its International Finance Corporation (IFC) division, along with a consortium of other lenders, pledged $653m and the Multilateral Investment and Guarantee Agency (MIGA), another part of the World Bank Group, is providing $210m worth of “political risk insurance” to private lenders and investors.

Egypt still has plans for wind and nuclear

Solar isn’t the only renewable energy Egypt is investing in. It is rolling out huge wind farms on the Red Sea and Gulf of Suez, with a combined capacity of 1,420 MW. And by 2026 it also hopes to have a new nuclear power plant operational. The 4,800 MW capacity plant at Dabaa is being built by Russia’s Rosatom. There is room for all. 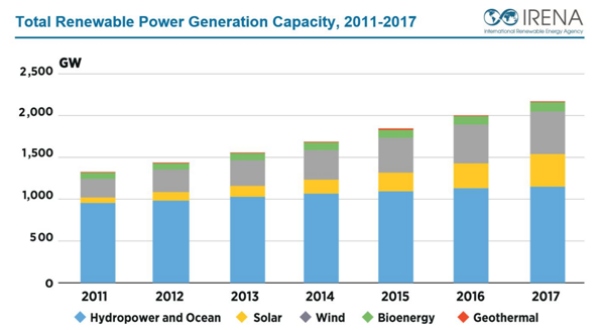 Global solar generation capacity has grown rapidly for seven years in a row.

Meanwhile, the competition between India and China to host the world’s largest single-site solar farm is hotting up. In the cold desert of India, a 5GW solar farm is due to go live in 2023. The Ladakh project will make it the largest in the world in power generation terms, surpassing the ambitions of China’s Datong Solar Power Project. Situated in the western Himalayas, the abundant sunlight and clear air should make it an extremely effective location for solar technologies. Power minister RK Singh said last year that Ladakh has the potential to host 25GW of solar generation.

The government tenders are not just for generation. The energy needs to be stored. So developers have been instructed to explore different forms of storage technology, including battery, molten salts, and pumped storage. 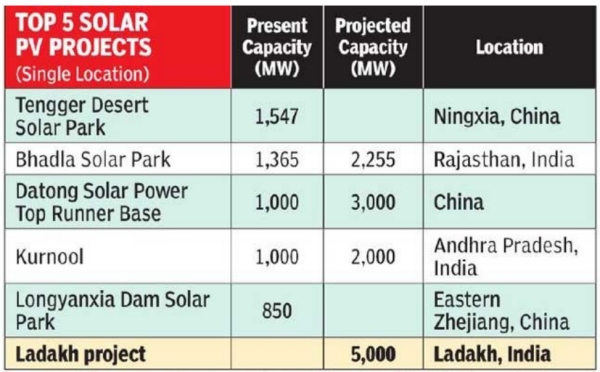 Dubai is throwing its hat into the ring too. The Mohammed bin Rashid Al Maktoum Solar Park will have a planned capacity of 1GW by 2020, and 5GW by 2030. The UAE Energy Strategy 2050 aims to develop an energy mix that combines renewable, nuclear and clean energy sources to balance economic requirements and meet environmental goals. By 2050, the UAE aims to invest AED 600bn ($163bn) to meet the growing energy demand and ensure the sustainable growth of the country’s economy. The strategy also seeks to increase the efficiency of energy use by individuals and organisations by 40%, and achieve savings of AED 700bn by 2050.

You don’t need to break a world record to fight climate change, but it helps if you can break your own nation’s. In December, the Australian state of New South Wales (NSW) approved an AUS$1bn ($717m) solar project for Yarrabee Park. It should be generating 900MW of clean electricity in early 2020, and have a lifespan of about 30 years.

The new farm’s output will dwarf the 500MW produced by the nine large-scale solar farms currently operating in NSW, and will have the equivalent impact on carbon emissions as removing 540,000 cars from Australia’s roads.

There’s no doubt that large-scale solar projects have become more viable as the costs of making solar panels continues to drop. Combine this with the satisfying ambition to break a record, and solar farms will keep getting bigger and bigger.