News comes of another renewables record for China. The Shenzhen based manufacturer BYD has launched the world’s largest pure electric double decker bus fleet, to be delivered to the city of Xi’an. To illustrate China’s drive to dominate this market, they have already won the international tender to deliver 37 of a total of 68 new electric double decker buses to London, where the red double decker is an icon. That’s more than the remaining 31 that will come from the British company Optare.

China’s success is everyone’s success, when it comes to climate change. But, according to T&E, a serious question must be asked about Europe’s determination to lead the transition to renewables when its own long established vehicle manufacturers, and the policy environment they exist in, lag behind any nation.

Transport & Environment (T&E) released a study in November 2018 showing the current state of play in Europe, and their recommendations for European buses to go 100% electric. The first thing to note is that electric bus sales are rising fast.

Sales of electric buses doubled in 2017, and available figures show that by mid-2018 electric bus orders had matched the whole of 2017. 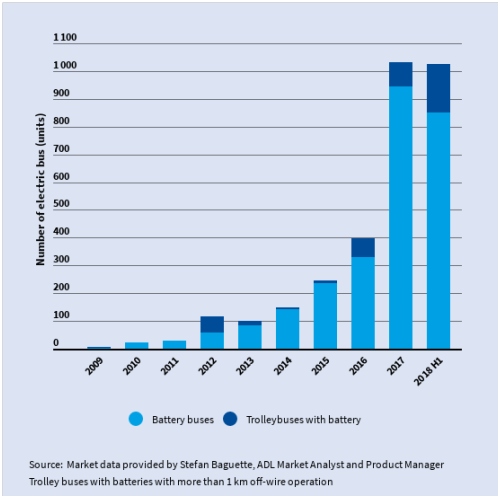 “Cities all over Europe will only buy electric buses from 2025 onwards – and I am very sure of this. Urban transport will be electric – we are on the brink of radical change” – Joachim Drees in 2018, CEO of MAN Truck & Bus

More than half of the electric buses are in five countries

The Netherlands, UK, France, Poland and Germany account for more than half the total number of electric buses in Europe, including those on order. The reasons for these differences will be – apart from size, obviously – a mix of national electricity costs, and transport policies and infrastructure. In any event, electric buses average a couple of percent of the total across Europe, so there’s plenty of room for growth. 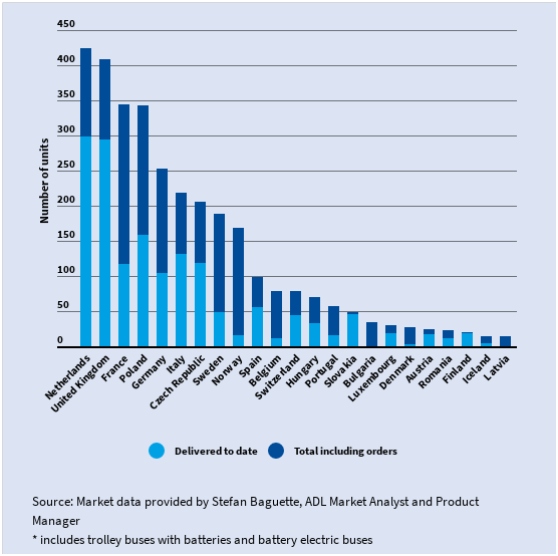 So now that there is a clear trend upwards, T&E says Europe must manufacture here. That’s the kind of message we’re getting from all players across the energy market: the green economy mustn’t just save on emissions, it must and can save jobs, even create them. To do so, we need to learn a few lessons from the Chinese.

Chinese bus makers benefit from generous national subsidies. According to the World Resource Institute, the city of Shenzhen – hometown of the leading manufacturer and engineering company BYD – received $150,000 in subsidy per bus prior to 2016 to electrify its entire bus fleet with BYD e-buses.

This state support has made China the world leader in this space. It has about 99% of the 385,000 electric buses on the roads worldwide in 2017, which is 17% of the country’s entire fleet. Every 5 weeks China adds as many to this total as all the working buses in London (around 9,500), or three times the existing European fleet of electric buses (including those on order). The size of the Chinese electric bus fleet exceeds the number of all city buses in Europe. (Latest figures for 2017 from ACEA give the number of buses and coaches in operation in Europe as 892,861. 38% are urban buses, which equals around 340,000 city bus units.)

In Europe itself, BYD already has a production capacity of around 400 electric buses per year. All this tells us two things, says T&E: policies and state support are needed here, and there’s no time to lose.

The pressure to transition is already building. Many European cities are committing to low/zero emission zones. The list includes lots of big names: Amsterdam, Athens, Barcelona, Brussels, Copenhagen, Hamburg, Heidelberg, Liverpool, London, Madrid, Milan, Oslo, Oxford, Paris and Rome. Some of these cities are part of the C40 Fossil Fuel Free Street Declaration that pledge to procure only zero emission buses from 2025, and to make their city emissions-free by 2030.

About 7,750 local European authorities, totalling more than 250 million inhabitants (accounting for three quarters of the CO2 emissions produced in the EU) have committed to signing the EU Covenant of Mayors for Climate & Energy. Part of their programme is the decarbonisation of urban buses. Bus emissions matter to mayors who make promises to voters over emissions. According to the International Council on Clean Transport (ICCT), buses are just one percent of all vehicles on the road but 25% of emissions in the transport sector.

Forget emissions. The TCO is moving against diesel 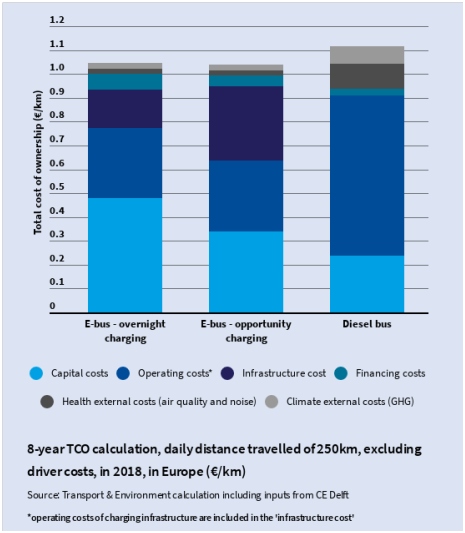 Even putting emissions aside, the cost trends are not looking good for diesel anyway, says the T&E study. Looking at the total cost of ownership (TCO) to the bus operator, diesel beats electric only if you ignore all externalised costs: emissions and health. Add in health – a measurable cost for healthcare services that has to be paid for today – and diesel loses. Add in the emissions cost – a future cost, but a big one! – and diesel makes no financial sense at all, today. And in the near future, as battery prices drop due to investment and R&D the cost of electric buses will drop too. The T&E study quotes BNEF figures that predict battery prices for e-buses will decrease by 9% to 12% annually on average over 2016-2030, depending on the level of demand in the European market. That is a 75%-83% drop in the cost per kWh.

Of course, the TCO can vary a lot from one country or city to another since it depends on many factors such as fuel / electricity prices, annual driving distances, charging infrastructure, financing costs, battery specifications and lifetime, vehicle taxes, road charges (e.g. congestion charging), and subsidies. To take electricity costs as a stark example, in Sweden it’s €0.06/kWh and in Germany it’s €0.15. So EU, national and city policies are an essential part of the equation, says T&E.

There are a large number of levers that the authorities at the EU, national and local level can pull. So T&E breaks down its recommendations into local and national. For city authorities it recommends:

At the national and EU level, T&E recommends

The manufacturers are convinced, and so are the policy makers. But when time is not on your side, something more is needed, which is why the focus is on new rules, financing models, and mechanisms to accelerate the transition.

Meeting our climate goals is not about winning records. But if winning records helps us meet those goals, then everyone should join the race to electrify their bus networks. And if Europe wins the record from the Chinese, and then China wins it back, we all win in the end.