In Part 1 of this special report, Komila Nabiyeva demonstrated how investment conditions in South East and Eastern Europe, South Caucasus and Central Asia make it almost impossible to justify development of renewables infrastructure on any great scale. That being the case, she calls on the EU to play a greater role. Their initiatives are already making a difference. This is encouraging because it shows that with more EU engagement, a more meaningful energy transition is possible. As well as getting the region on the road to Paris targets, that would help solve their pressing energy security and health issues, boost economic growth and contribute to democratisation and peace building.

Energy infrastructure in the countries of South East and Eastern Europe, South Caucasus and Central Asia is largely inherited from the Soviet era. This has led to fossil-fuel based monopolies where policy-makers and energy industry see little advantage in creating the conditions for a transition to renewables.

High fossil fuel and nuclear subsidies (including the complete over-looking of the cost to health and the environment) going hand-in-hand with artificially low electricity prices hinder investments in renewables capacity and infrastructure. As a result, the region as a whole is missing out on a whole raft of fundamental long-term economic, environmental and health benefits.

Benefits of an energy transition

An energy transition would be extremely beneficial from social, economic and political standpoints, and a number of drivers and opportunities could foster the process.

The region remains extremely dependent on fossil fuels and nuclear in its total primary energy supply (see figure 1). Most countries are net energy importers, heavily dependent on oil and/or gas imports. (For instance, in Armenia, Belarus and Georgia net energy imports account for over 60% of total energy use and in Moldova as high as 90%.) The deployment of renewable energy and energy efficiency measures could help solve pressing energy security and energy poverty issues. 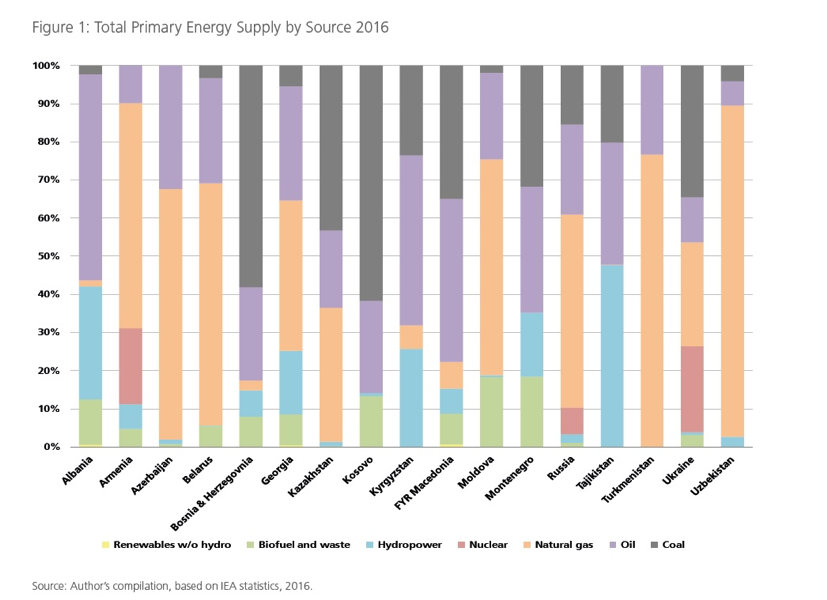 Meanwhile, the economies, heavily dependent on revenues from local fossil fuel energy production (e.g. Russia, Azerbaijan and Kazakhstan) can increase their resilience to external shocks, such as volatile oil prices, by diversifying their energy supply.

Power generation, transmission and distribution infrastructure across the region is poorly maintained and often operating beyond its design life. In the coming years, many countries will have to replace their aging and inefficient fossil fuel and nuclear energy infrastructure (operating beyond its design-life), opening up a great opportunity for advancing the switch to clean energy.

In 2013, about 37 million emigrants came from countries in this region[1] – 16% of all international migrants in the world and nearly 10% of the total population in the countries of origin. Investment in renewable energy will create new domestic jobs, helping slow the rising rural depopulation, labour emigration and brain drain.

Deployment of decentralised renewable energy could also help to significantly advance the democratisation process. Investments and support for renewable energy projects by energy cooperatives, communities and citizens can help significantly to reduce oligopolistic control of large conventional power plants and levels of corruption.

An effective transition would help to dramatically reduce air pollution and to solve numerous health and environmental problems in the region, resulting from fossil fuel and nuclear energy generation. For instance, coal power plants in five Western Balkan countries are among the most polluting in Europe, causing about 7,200 premature deaths per year. Depending on weather and wind conditions, air pollutants can travel more than 1,000 km and cause damage to health in neighbouring EU countries and beyond.

Last but not least, renewable energy deployment can foster regional cooperation through the expansion of interconnection capacities to neighbouring countries and cross-country trade and help to end conflicts over limited and unevenly distributed fossil fuel energy and water resources.

Until the conditions for renewables investment are addressed in the region, its neighbours in Western Europe and the rest of the world cannot expect much in the way of a contribution to global efforts to reduce greenhouse gas emissions.

EU engagement is especially important in light of China’s controversial “Belt and Road” initiative which includes plans on construction of new coal power plants across the region. These would lock the countries into coal assets for decades, further damaging people’s health and the environment, and aggravating climate change.

It should focus on know-how transfer and dialogue on favorable sustainable energy legislation and investment climate, as well as technical capacity-building on integration, planning and operation of renewable energy.

With the targeted and concerted technical and financial cooperation of the EU and other international organizations, the countries in the region could significantly accelerate their currently slow pace of energy transition, improving their own social-economic situation and contributing to global efforts to stop global warming.

Part one: Subsidised fossil-fuel power blocking the way for renewables

Graphic produced for and first printed at the publication of the Friedrich-Ebert-Stiftung: Nabiyeva, Komila (2018): Energy Transition in South East and Eastern Europe, South Caucasus and Central Asia Challenges, Opportunities and Best Practices on Renewable Energy and Energy Efficiency