EU electricity supply from RES off course for 2030 – so is it more nuclear or gas?

by Tom Idle and Matthew James

Last year’s strong reported performances for the share of clean energy in the UK and German energy mixes paint a rosy picture. It is the result of billions in investment and strong signals from Brussels and the COP series. Looking more broadly across the EU though, the share actually decreased by 17% from 2016 to 2017. Furthermore, due to lack of investment stretching back as far as 2011, the rate of growth has dropped significantly putting RES off course for its 32% share by 2030. That, coupled with a substantial increase in electricity demand on the near horizon, leaves an even bigger gap for other technologies like nuclear and gas – even existing coal – to fill.

Power generated by renewables topped coal in Germany for first time in 2018, an important milestone for its clean energy policy. Also in 2018, 40% of its electricity was generated by wind, solar, biomass and hydroelectric sources – up 4.3 percentage points on the previous year. With the substantial increase in demand that’s expected in coming years stimulated by the transition to EVs that’s great news.

Data from the Fraunhofer research group shows that the majority of clean power came from onshore and offshore wind systems (20.4% of total output) and solar (8.4%), the installed capacity of which expanded by 3.2 gigawatts (GW) to 45.5GW last year. 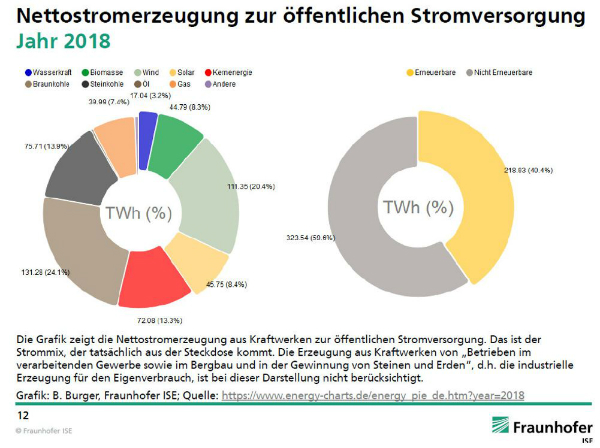 Bruno Burger, author of the Fraunhofer study, said: “We will not fall below the 40% in 2019 because more renewable installations are being built and weather patterns will not change that dramatically.” Whilst a fair conclusion, it does not show how this will be maintained in the longer term bearing in mind how much more electricity will be needed. 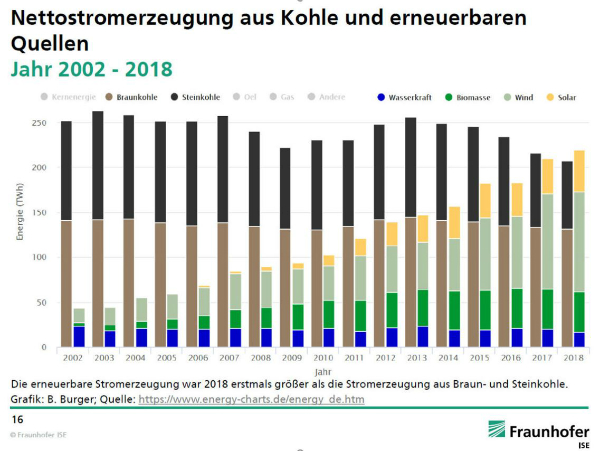 And in the United Kingdom…

It is a similar situation in the UK where overall power generation fell to its lowest level since 1994. A third of electricity came from renewables in 2018. Wind (accounting for 17% of the total power generated), solar (4%) and the burning of plant material and biomass (11%) are taking an increasing share of the overall power mix. Low-carbon supplies (including nuclear) made up a record 53% of the total in 2018.

Wind power capacity was up 16% on 2017, producing some 58 terawatt hours of electricity – nearly 3.5 times as much as the 17TWh coming from coal. In fact, coal now makes up a record low of just 5% of the UK’s total energy production, with gas use also down to 39%. 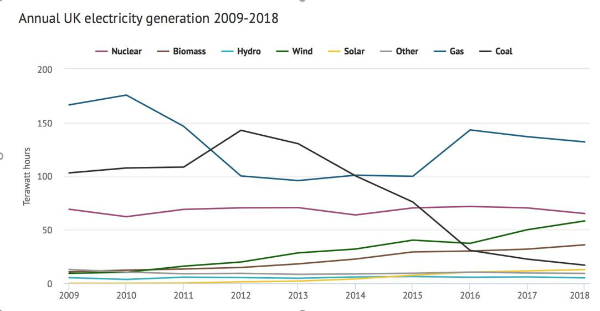 As you can see in the graph, the sharp decline in coal is being matched by growth in electricity from gas since 2015. Mitigated by a strong performance by wind. To continue development of clean energy supply and use, wind will have to perform even better as demand increases over the next decade stimulated by increased popularity of electric heating and vehicles especially. Otherwise the UKs reliance on gas will only become even heavier. Of course, nuclear should play a major role here, unlike Germany, but it is predicted that the UK will need 3 Hinkley C-type plants, not one, to meet demand. And Hinkley C has still not come online.

Elsewhere in Europe, Portugal managed to produce more renewable electricity than it consumed in early 2018 and now predicts renewables (solar mainly) will satisfy its mainland electricity needs by 2040.

Within the EU, the top countries measured in terms of the share of energy from renewable sources measured as a percentage of gross final energy consumption are Sweden, Finland and Latvia, the Baltic state having invested heavily in biofuels, biogas, and hydropower.

Elsewhere in the EU28

It is a mixed picture across the rest of the continent and there is a danger that these pockets of good news are masking the reality that the rate of renewables deployment is faltering. Across the EU, renewable energy production share continues to vary widely between countries – from more than 30% of gross final energy consumption in places like Austria, Finland, Denmark, Latvia and Sweden to below 9% in the Netherlands, Belgium, Luxembourg and Malta. 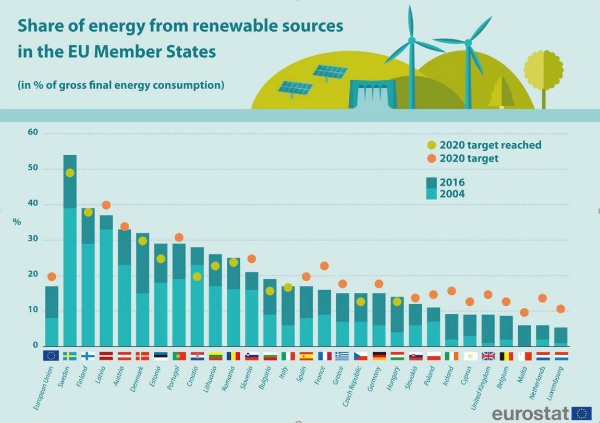 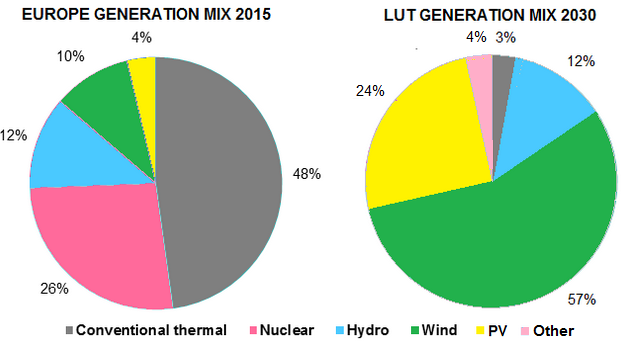 The amount of clean energy being produced within the EU-28 increased overall by 66.6% between 2006 and 2016 – an average rate of increase of 5.3% a year. However, by 2016, the latest year for which data is available, the share of renewables in gross final energy consumption across Europe stood at just 17%.

Yes, such a trajectory is likely to see the EU meet its 2020 goal of producing 20% of total power by renewables. But the pace of new capacity being deployed has certainly slowed in recent years. According to European Environment Agency estimates, with the share of renewables has only increased marginally – from 17.0 % to 17.4 % – between 2016 and 2017.

To get to the 2030 goal of producing 32% of power from clean energy will demand a much greater effort, with constant annual deployment increases of around 1.2 percentage points a year between now and then. That’s almost twice the 0.7 percentage points growth rate seen between 2005 and 2016.

“Meeting the 2030 goal of producing 32% of power from clean energy demands constant annual deployment increases of around 1.2 percentage points – much greater than the 0.7 percentage points growth rate seen between 2005 and 2016″

While Germany and the UK appear to be keeping pace with their Scandinavian and Baltic neighbours at the moment it is not a trend that is likely to continue. The two largest economies showed a sharp decrease in overall clean energy investment in 2017 – 26% and 56% drops respectively.

Globally, renewables, and solar in particular, have become phenomenally cheap in recent years, driven by oversupply from China. This could ensure these forecasts are met. However, the EU’s antidumping legislation – the protectionist tariff domestic governments impose on foreign imports said to be priced below fair market value – has seen many countries failing to benefit from cheap Chinese renewables technology and falling prices. Although the European Commission has moved to scrap such tariffs, this has already hampered solar deployment efforts in particular.

According to International Energy Agency (IEA) predictions, European energy production from coal is set to more than halve by 2040 – from 237 megatonne of coal equivalent (Mtce) in 2017, to 93 Mtce. There are similar predictions for oil (from 4 million barrels per day, to 3), and natural gas (from 291 billion cubic metres (bcm), to 203 bcm). 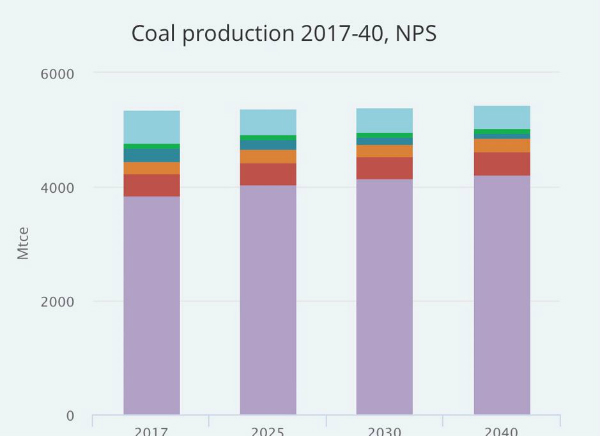 Despite evidence published by the Energy Watch Group and LUT University demonstrating that it is possible for Europe to transition to being powered 100% by renewables by 2050 and that it would create more jobs and be more cost effective than the present fossil fuel-led system, the squeeze on national economies is stopping Governments from persuading voters that investment in new infrastructure is in their interest. It warns “the energy transition is not a question of technical feasibility or economic viability, but one of political will” to the extent that even its own share targets is under threat as things stand.

The move away from coal is exactly what’s prescribed. It makes it unavoidable that other technologies and sources of energy will be brought in to replace it but what and how is far from clear. Demand will not stay static for long and the increase will be sharp. The transition to electric vehicles on its own will see to that. Without renewed investment in renewables infrastructure – capacity, integration techniques and storage – we cannot expect the sector to meet the 32% share target. Instead, we will be relying even more heavily on nuclear and gas to meet our targets. It makes the cases for both worth examining very carefully.