Whilst the top-level 40% 2030 emissions reduction target looks relatively safe, share from RES is definitely not. Carbon pricing, in its various forms, is working but, frankly, not in a predictable way. A closer inspection of the market-driven EU ETS permit scheme illustrates how and why gas – especially American LNG – is going strong, putting the 32% share of final energy consumption from renewables in doubt.

Whenever European energy industry dialogues touch on market volatility, much of the obsession seems to be on oil and gas prices, reduction in coal usage, security of supply and the fundamental renewable versus conventional power cost implication.

But away from consumer scrutiny, the driving mechanism in an inexorable pan European march to a low carbon future that to some extent links all of the above is equally volatile – the European Union’s carbon permit pricing scheme. The concept has been around since 2005 and is pretty simple to fathom, but its pricing and dynamics are anything but.

As part of the scheme, carbon permits or allowances are traded under the common market’s Emissions Trading System (ETS), which charges commercial carbon emitters (most notably power and manufacturing plants) for every tonne of carbon dioxide they emit above a certain limit.

The allowances are distributed via a combination of free allocation and auctioning. While that’s simple enough, trading carbon is anything but as the ETS has often suffered from too many or too few permits with a lack of balance. Things started with a bang and by 2006 prices spiked above €30 per tonne, only to slump to lows of €2-3 in the wake of the global financial crisis, when fears of a surplus of permits became a reality.

Plenty of tussles in Brussels

Most EU policymakers agreed something had to be done. However, problems arose in streamlining the process to begin with and getting member nations to agree on a common framework. Meanwhile, the ETS continued to progress to its next phase (from 2013-2020) adding sectors such as aviation but not materially altering its trading structure.

Nobody in Brussels was all that keen to drive energy intensive industries to relocate for the sake of onerous climate legislation. So the situation triggered lengthy deliberations in Brussels – not about whether to head to a low carbon future but rather about finding the most optimal way of getting there. The answer, after two years of wrangling, was first offered in November 2017 – the Market Stability Reserve (MSR) mechanism.

The MSR provides a framework to restrict a certain number of permits from market auctions effective 2019 with an aim to address oversupply scenarios. However, the timing of it all has created yet another market muddle.

An EU spokesperson says that, courtesy of the ETS, by 2020, emissions from sectors covered by the system will be 21% lower than in 2005 and added: “The scheme and subsequent reforms have proved that putting a price on carbon and trading in it can work.”

Be that as it may, those at the receiving end might be forgiven for not sharing that enthusiasm, especially about the timing. Just as the MSR appeared over the trading horizon, in November 2018 Germany – one of the biggest markets for carbon permits – paused auctions until the first quarter of 2019 as its contract with the European Energy Exchange expired.

In its wake, anecdotal evidence suggests buying increased in early in fourth quarter of 2018 as carbon traders built long positions due to reduced supply from auctions, and higher energy prices as the European winter approached. Sources in London and Frankfurt say around 22 million permits from auctions already logged will have to be sold as German auctions resume.

And let’s not forget, MSR has already put 2019 in a serious deficit. That means prices could average at their current levels of €25 per tonne in 2019, and as high as €30 in 2020, according to projections by investment bank Berenberg.

The ongoing situational price spike, to the highest level on record since the fourth quarter of 2008, is unlikely to be a one-off and Berenberg is not the only forecaster with a bullish stance, not least owing to firm German commitments for a coal switch-off by 2038 or earlier.

“The Germans have no choice but to revert to natural gas so utilities can keep emissions costs in check. Renewables, as events this winter illustrate, won’t be the primary beneficiary” Gaurav Sharma, Energy Post

As early as 2023-24, prices as high as €40 are not inconceivable and the knock-on effect on already high German baseload power prices remains to be seen. But when wholesale energy prices rise after feeling the effects of higher carbon, utilities – not just in Germany but across Europe – will have to pass on some of the cost to consumers through higher retail energy prices and raise capital expenditure on alternative energy.

Renewable energy is supposed to be the beneficiary of higher carbon prices, but another fossil fuel is the medium-term beneficiary as Germany, Italy and Spain attempt what the UK is doing with a degree of success – swapping coal with natural gas as a low carbon bridging fuel.

And as things stand at the time of writing, the Europeans can’t get enough of it and are scrambling well beyond Russia in their quest for volumes. According to Refinitiv Eikon data (see graph), European utility companies have stepped up their efforts to procure more US natural gas as carbon prices bite. 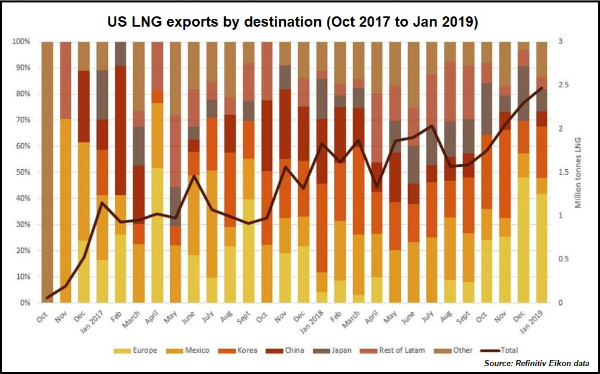 That makes the US currently second only to Qatar when it comes to supplying LNG to Europe, more than European imports via Russia’s Yamal LNG project. While Gazprom still exports on average 145 million tonnes of pipelined Russian gas a year to Europe, which is four times the current capacity of all onstream US LNG export terminals, the Americans are quietly cheering ETS and MSR.

That’s because the currently high Dutch benchmark gas prices in the $7-8/MMBtu range compete favourably with Asian spot prices for LNG which have dropped to the $8-9/MmBtu range. More expensive carbon pricing and the winter has driven prices higher in Europe, cutting the conventional Asian premium. In absence of the premium, it is cheaper for American exporters to ship to Europe and make money, at least this winter.

Not only that, UK’s Centrica, Spain’s Naturgy, Iberdrola and Endesa, France’s EDF and Total, and Italy’s Eni have all inked contracts with US LNG exporters with cargo deliveries speared throughout the year. Although most attribute it to “competitive LNG pricing”, high carbon costs remain a driver.

Nonetheless, all US exporters do is provide a mitigation mechanism for carbon pricing exposure, while the market remains far from perfect. That has led some, including Edmond Alphandéry, former French economy minister and founder of the Euro 50 Group, to demand a continent-wide carbon price floor.

He has been scathing about the ongoing carbon price volatility, describing it as “bad for business” and has called on the European Commission to set a carbon price floor around €20. However, an EU spokesperson dismissed the idea saying it was not the commission’s job but that of the market. “We regulate the volumes in consumer interest, and not the price of emissions.”

In that respect, there should be some sympathy for the policymakers. Alphandéry’s proposed floor is a political hot potato, and not exactly low in any sense of the word. Taxing carbon emissions at EU-level would open a whole new can of worms for Brussels, which has delegated it to national governments.

What’s more, with European elections around the corner, while few would admit it, there is no appetite for providing populists with another reason to fan anti-EU sentiment. However, high prices do provide an incentive to lower emissions and Alphandéry’s stance remains a popular one among policymakers.

The Intergovernemental Panel on Climate Change (IPCC) has often called for polluters to pay more and for the proceeds so obtained to be streamed into industry innovation. France’s EDF and Germany’s E.ON have also called for a more detailed examination of carbon pricing, and have proposed visiting it at regional level, notching things up a level from the current national frameworks.

How this will play out remains unpredictable. MSR will inflict pain on utilities and manufacturers, while US LNG exporters and other natural gas providers will provide a short-term balm. As for the way forward – there’s guaranteed to be a lot of political hot air about but at least it will be carbon neutral.