100% renewable energy revisited: the window could close even quicker

In fact, it is closing quicker: solar, storage displacing fossil fuels faster than ever

Why are electricity prices so high for UK industry? No, it’s not climate policy

EU ties itself into knots with capacity market decisions

UK capacity auction: the biggest winner is gas (the biggest loser too)

Climate, energy and transport in Germany’s coalition agreement: there’s lots of it

European solar market grows, led by … Turkey (and held back by tariffs)

UK capacity auction: the biggest winner is gas (the biggest loser too)

National Grid, the UK transmission system operator, on 8 February announced the results of its capacity auction for delivery in 2021/2022.

The clearing price turned out to be much lower than analysts had expected at £8.40 per kW per year. In December 2016 a similar auction cleared at £22.50 per year.

In total 50.41 GW of capacity was awarded, out of 74.2 GW offered. You can find the results in this document. Save the link because it was very hard to find! Communication does not seem to be the strongest point of the people who are responsible for the capacity auction.

This is perhaps also why media reports were few and far between, and in some cases dead wrong. For example, Reuters reported that “British power capacity auction fails to attract gas projects”, whereas the results show that gas fired stations got by far the most contracts!

You can see the main results in the graph below: 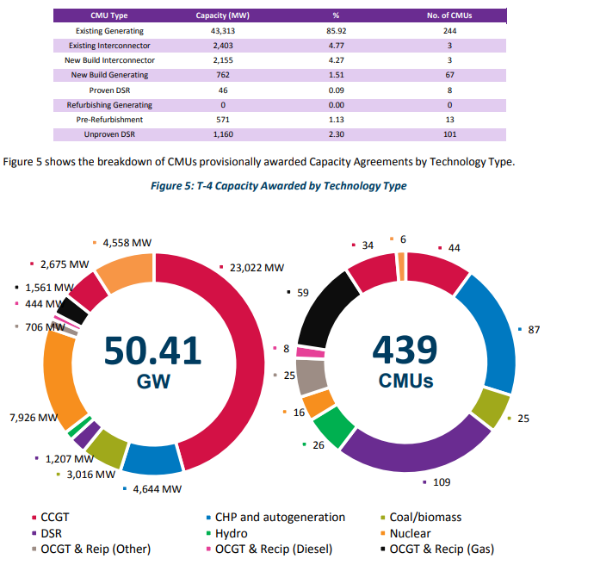 In case you have noticed that the explanatory notes show 9 types of “CMU” (capacity market unit), whereas the figure on the left shows 11 colour bars, you are quite right. There are two explanatory notes missing – the bar that says 4,558 MW are interconnectors and the one that says 2,675 MW is storage.

Here is a table with the full results:

If there are any conclusions to be drawn from this is that: gas did very well (OCGT are open-cycle gas turbines, CCGTs are closed-cylce gas turbines), and nuclear and interconnectors also did well. Demand response (DSR) did get some contracts too.

But what completes the picture is if we also take into consideration which CMUs exited the auction, because they turned out to be too expensive.

This is shown in this table:

It turns out that CCGT’s were also the largest category that did not make it, which explains why Reuters thought that the capacity auction failed to attract gas plants.

Interestingly, a lot of coal did not quality either, whereas all nuclear units that participated in the auction qualified.

Climate, energy and transport in Germany’s coalition agreement: there’s lots of it

What exactly did Angela Merkel and Martin Schulz agree to in their draft coalition agreement (it still has to be approved by the members of the SPD)?

As we reported last week, the new government promises to set an “end date” for coal power next year, quite a significant announcement, although of course we don’t know what that date will be.

But the two parties agreed on a lot more than that. Clean Energy Wire has a useful overview in English, of which I  reproduce the key points below. There are many interesting items among them. For example, the pledge that “We do not want EU support for new nuclear power plants”. Or the announcement “to establish a Fraunhofer research institute for storage technology”.

Continue the “National Innovation Programme Hydrogen and Fuel Cell Technology”; change regulation to enable the use of ‘green hydrogen’ and hydrogen from industrial processes as fuel or for the generation of conventional fuels (e.g. natural gas).

European solar market grows, led by … Turkey (and held back by tariffs)

Surprise, surprise: the European country which (probably) installed the most solar power last year was not an EU member state. It was Turkey.

All in all, European countries installed some 8.61 GW of solar power systems in 2017 – a 28% increase in comparison to the 6.72 GW added in 2016, according to a first estimate from SolarPower Europe, the association of the solar power sector in Europe.

The largest European solar market in 2017 was Turkey, which grid-connected 1.79 GW last year, followed closely by Germany, which added 1.75 GW (though this figure could still be adjusted upwards). Turkey saw an end-of-year rush with around 800 MW of solar systems either under construction or installed, but which were not fully up and running in 2017. The total market share of Turkey and Germany was around 41% in Europe in 2017.

While Turkey grew by 213% year-on-year and Germany by 23%, the UK, once a solar star, lost its position as the leading European solar market. After axing solar incentive programmes, new installations dropped by 54% to around 912 MW in the UK, from 1.97 GW in 2016, less than half of the 4.1 GW that was installed in 2015.

“We are expecting strong growth in the coming years as several EU member states are choosing solar to meet their national binding 2020 renewables targets. This makes perfect sense as solar is the most popular energy source among EU citizens,  due to its low-cost, versatility and reliability,” said Michael Schmela, Executive Advisor and Head of Market Intelligence at SolarPower Europe.

The date are based on official data from government agencies whenever possible. If such information was not available from primary sources, SolarPower Europe has gathered data mostly through its members, comprising national solar associations. As data for Q4/2017 is often not yet completely available or will be updated by national entities responsible for solar statistics in the coming months, the actual installation numbers might be considerably higher than this first estimate, the organisation notes.

James Watson, CEO of SolarPower Europe, did make a critical note. He said, “If the trade measures on imported solar panels were removed, according to a DG Justice and Consumers study we could see an increase in solar self-consumption in the EU of around 20-30%. Likewise, if the EU adopted a 35% renewable energy target, instead of today’s 27%, no less than 120,000 new solar jobs could be created.”

An announcement from the French Secretary of State for the Ecological and Inclusive Transition, Sébastien Lecornu, that France “could become the powerhouse of a global tidal energy”, is not exactly a hard piece of news, I will admit that.

And yet it does show the ambition of France in this area of renewable energy, which has little to show for itself as yet, but holds some real promise, at least in theory.

Lecornu spoke at an event at which he “announced preliminary studies to the launch of a tidal energy tender”. According to lobby group Ocean Energy Europe, “the announcement is an important first step and strong message to the sector. A tender for tidal energy will see France become the global centre of tidal energy manufacturing.”

The tides in northern France are among the most powerful in the world, notes Ocean Energy Europe. “Following a decade of R&D development, tidal energy technology is now ready to use this resource. Tidal farms will generate predictable renewable energy, while creating significant jobs opportunities and local economic activity.”

Lecornu also announced the launch in 2018 of preliminary studies of tidal zones in Brittany and Normandy.

According to Gruet, “The French Government has clearly recognised this opportunity and it will be up to the sector to demonstrate the readiness of the technology and the progress achieved in the first pilot farms. We look forward to discussing the design of the tender, to ensure fast deployment and best use of public finances.”