Nuclear as flexible as gas, says EDF, and Netherlands has remarkable plan for long-term storage of nuclear waste

Gas under fire in Europe: do we need the Southern Gas Corridor?

A breakthrough for grid-scale batteries

EU: “no new trade deals with countries not in Paris Agreement”

On 31 January, the EU’s High-Level Group on Sustainable Finance published its final recommendations on how the EU can mobilize capital to funds for the climate and energy transition. The expert group, chaired by Christian Thimann of insurance company AXA Group, and consisting mostly of financial experts, was given a mandate “to prepare a comprehensive blueprint for reforms along the entire investment chain”.

In the foreword of the report, Valdis Dombrovskis and Jyrki Katainen, Vice-Presidents of the European Commission, make it clear that for Brussels this is serious business. They write that post-Paris the EU is “moving towards a low-carbon society, where renewable energy and smart technologies increase our quality of life, spurring job creation and growth without damaging our planet.”

“The EU is already leading this shift”, they say, “with our pledge to reduce CO2 emissions by 40% in all

sectors of our economy by 2030. One by one, we are adopting the necessary policies to put our economy on a more sustainable footing and facilitate the transformation towards more resource-efficient and circular business models for European companies.”

However, “there is still a long way to go. We will need about €180 billion in additional yearly investments in sectors such as renovation and energy efficient buildings, renewable energy generation and transmission, and low-carbon transportation, to name a few.”

The European Union “is providing massive impetus to help attract the required investments”, write the VP’s. “The European Fund for Strategic Investments (EFSI) has already generated over €250 billion in investment. In 2017, almost one third of funds were channelled into energy, environment and resource efficiency, as well as social infrastructure. Now the EFSI 2.0 extends the lifetime of the Fund until 2020, and raises its investment target to €500 billion, with at least 40% of new investments helping to reach the Paris agreement objectives.”

But more money is needed, which the public sector won’t be able to provide. Hence, “to address the funding shortfall, we are also looking into regulatory changes to mobilise the significant funding capacity of private capital.”

“Reaching our Paris agreement goals”, say Dombrovskis and Katainen, “requires no less than a transformation of the entire financial system, its culture, and its incentives. Europe should lead this change.”

Here is where the High-Level Expert Group (HLEG) on Sustainable Finance comes in. This Group has come up with a number of recommendations that point the way to this required transformation, although the two VP’s acknowledge that their report “is only the beginning”.

As to the recommendations themselves, they are fairly general in nature. For example, “as priority actions, the HLEG recommends:

The HLEG also advises the EU:

You can find the Final Report of the HLEG here.

A breakthrough for grid-scale batteries

Here is one that I think that just might be for real. “A type of battery first invented nearly five decades ago could catapult to the forefront of energy storage technologies, thanks to a new finding by researchers at MIT”, is how MIT itself reports it.

The findings have been reported in the journal Nature Energy, by a team led by MIT professor Donald Sadoway.

“Although the basic battery chemistry the team used, based on a liquid sodium electrode material, was first described in 1968, the concept never caught on as a practical approach because of one significant drawback”, writes MIT: “It required the use of a thin membrane to separate its molten components, and the only known material with the needed properties for that membrane was a brittle and fragile ceramic. These paper-thin membranes made the batteries too easily damaged in real-world operating conditions, so apart from a few specialized industrial applications, the system has never been widely implemented.”

However, Sadoway and his team “took a different approach, realizing that the functions of that membrane could instead be performed by a specially coated metal mesh, a much stronger and more flexible material that could stand up to the rigors of use in industrial-scale storage systems.”

“I consider this a breakthrough,” Sadoway says, because for the first time in five decades, this type of battery — whose advantages include cheap, abundant raw materials, very safe operational characteristics, and an ability to go through many charge-discharge cycles without degradation — could finally become practical.

While some companies have continued to make liquid-sodium batteries for specialized uses, “the cost was kept high because of the fragility of the ceramic membranes,” says Sadoway, the John F. Elliott Professor of Materials Chemistry. “Nobody’s really been able to make that process work,” including GE, which spent nearly 10 years working on the technology before abandoning the project.

As Sadoway and his team explored various options for the different components in a molten-metal-based battery, they were surprised by the results of one of their tests using lead compounds. “We opened the cell and found droplets” inside the test chamber, which “would have to have been droplets of molten lead,” he says.

But instead of acting as a membrane, as expected, the compound material “was acting as an electrode,” actively taking part in the battery’s electrochemical reaction. “That really opened our eyes to a completely different technology,” he says. The membrane had performed its role — selectively allowing certain molecules to pass through while blocking others — in an entirely different way, using its electrical properties rather than the typical mechanical sorting based on the sizes of pores in the material.

In the end, after experimenting with various compounds, the team found that an ordinary steel mesh coated with a solution of titanium nitride could perform all the functions of the previously used ceramic membranes, but without the brittleness and fragility. The results could make possible a whole family of inexpensive and durable materials practical for large-scale rechargeable batteries.

The use of the new type of membrane can be applied to a wide variety of molten-electrode battery chemistries, he says, and opens up new avenues for battery design. “The fact that you can build a sodium-sulfur type of battery, or a sodium/nickel-chloride type of battery, without resorting to the use of fragile, brittle ceramic — that changes everything,” he says.

The work could lead to inexpensive batteries large enough to make intermittent, renewable power sources practical for grid-scale storage, and the same underlying technology could have other applications as well, such as for some kinds of metal production, Sadoway says.

Sadoway cautions that such batteries would not be suitable for some major uses, such as cars or phones. Their strong point is in large, fixed installations where cost is paramount, but size and weight are not, such as utility-scale load leveling.

2017 was a record year for offshore wind in Europe according to statistics released by WindEurope on 6 Feburary. Europe installed 3.1 GW of new offshore wind, taking total capacity to 15.8 GW, an increase of 25% in just one year and 4% higher than in the previous record year, 2015.

13 new offshore wind farms were completed, including the world’s first floating offshore wind farm, Hywind Scotland. The UK and Germany accounted for most of them, installing 1.7 GW and 1.3 GW respectively. Europe now has over 4,000 offshore wind turbines operating across 11 countries.

A further 11 offshore wind farms are currently under construction, and they’ll add another 2.9 GW.  The total project pipeline should get Europe to 25 GW total by 2020.

WindEurope does note that offshore wind in Europe remains heavily concentrated in a small number of countries: 98% of it is in the UK, Germany, Denmark, the Netherlands and Belgium. 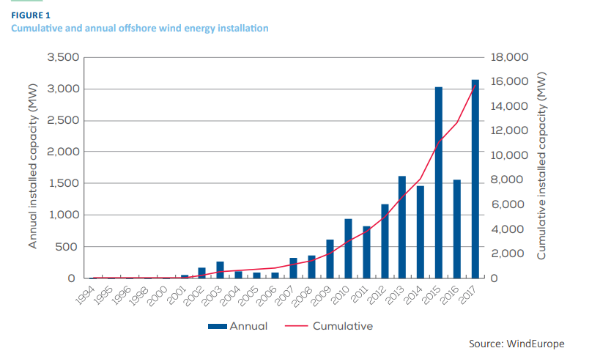 “Offshore wind is now a mainstream part of the power system”, commented Giles Dickson, WindEurope CEO.  “And the costs have fallen rapidly. Investing in offshore wind today costs no more than in conventional power generation. It just shows Europe’s ready to embrace a much higher renewables target for 2030. 35% is easily achievable. Not least now that floating offshore wind farms are also coming on line.”

2017 also saw final investment decisions (FIDs) of 2.5 GW new capacity worth a total of €7.5bn. This is down on 2016, notes WindEurope. “But it reflects falling costs. Plus the fact that new investments could still get feed-in-tariffs in 2016. The transition to market-based support (auctions) has slowed down new investments, not least there’s a time-lag between winning an auction and confirming an investment. Auctions held in 2016 and 2017 should translate to FIDs worth €9bn in 2018.”

Beyond 2020, things are less clear, says WindEurope. “Much depends what new offshore wind volumes governments commit to in the National Energy and Climate Action Plans for 2030 (NECAPs).”

Dickson added: “We’ll see further growth in 2018 and 2019. But the longer term outlook for offshore wind is unclear. Very few countries have defined yet what new volumes they want to install up to 2030. The National Plans governments are preparing under the Clean Energy Package will tell us more. The message to Governments as they prepare their plans is ‘go for it on offshore wind’: it’s perfectly affordable and getting cheaper still; it’s a stable form of power with increasing capacity factors; and it’s ‘made in Europe’ and supports jobs, industry and exports”.

EU: “no new trade deals with countries not in Paris Agreement”

French foreign affairs minister Jean-Baptiste Lemoyne told his own parliament on 1 February that if the US thought it could leave the Paris deal and still strike a trade deal with Europe: “The US knows what to expect.” He called on the EU to make a new trade policy: “No Paris Agreement, no trade agreement”.

As Karl Mathiesen reports on Climate Home News, a day later “a Commission trade spokesperson told Climate Home News that all EU trade deals contained a chapter on sustainability: ‘Since the deal we concluded last year with Japan, this chapter contains an explicit reference to the ratification and actual implementation of the Paris climate deal’.”

“This point is a priority for the EU and it would be difficult to imagine concluding an important trade deal without an ambitious chapter on trade and sustainable development attached to it”, said the spokesperson.

Mathiesen notes that “The statement backs up a tweet from the EU trade commissioner Cecilia Malmström on Thursday [1 February]. She said: “Paris deal reference needed in all EU trade agreement[s] today.”

He points out that “in the recent Japan-EU agreement, both parties agreed on the ultimate objective of addressing climate change and committed to implementing the Paris Agreement, to which they have made carbon emissions pledges.”

Beyond the US, the EU Paris position could affect ongoing negotiations with dozens of other partners, notes Climate Home News. “As of September 2017, 26 other countries were trying to gain more open access to Europe’s 500 million adult consumers.”

Laurens Ankersmit, a trade lawyer with Client Earth, said compliance with the Paris Agreement on both sides should be a precondition in any trade negotiation. But he added: “I am not convinced of [the EC’s] commitment to really make that meaningful. In the sense that the trade agreements will actually contribute significantly to achieving the goals set by the Paris Agreement. The commission is primarily concerned with trade liberalisation. Their object is not to protect the environment.”

He said a recent decision by the European Court of Justice made it legal for the commission to suspend parts of trade agreements if the other party was found to be in breach of the sustainability chapter. This could, in theory, allow the EU to punish countries that dragged their feet on their commitments to the Paris deal.

“This clearly provides more teeth to the trade agreements the EU is negotiating. The question though, is whether the commission and the [European] council will ever go there,” said Ankersmit.