The German Energiewende is under stress. Nuclear and coal have both been consigned to eventual history putting gas firmly back on the agenda environmentally, economically and politically. It makes Germany, like the UK, an informative prism through which to consider gas’s role in the EU energy transition and there are some clear signals about the direction of travel. The recently-launched German Gas 2030 Dialogue should answer the EU-wide question that whilst natural gas is abundant, relatively cheap and up to 60% cleaner than coal, is it clean enough to have a role in the long run? Balancing climate concerns with security of supply and affordability make this a politically-charged, complex debate. Zuzanna Nowak considers the over-arching factors informing German policy decisions – decisions which could create a template for the EU as a whole.

Back in 2014 and contrary to expectations, Ralf Dickel of the Oxford Institute for Energy Studies observed that “the role of gas in the Energiewende was hardly discussed and is not addressed in official policy”. While climate and energy policies have remained at the top of government considerations, only now is gas receiving due attention as a way of supporting the transition. The Gas 2030 dialogue process launched recently by the Federal Ministry for Economic Affairs and Energy attempts to provide answers to pressing questions on the role for gas in the German energy transition now and in the long term. Conclusions from expert consultations are not due till the Autumn, so what factors are at play for the role of gas in Germany? 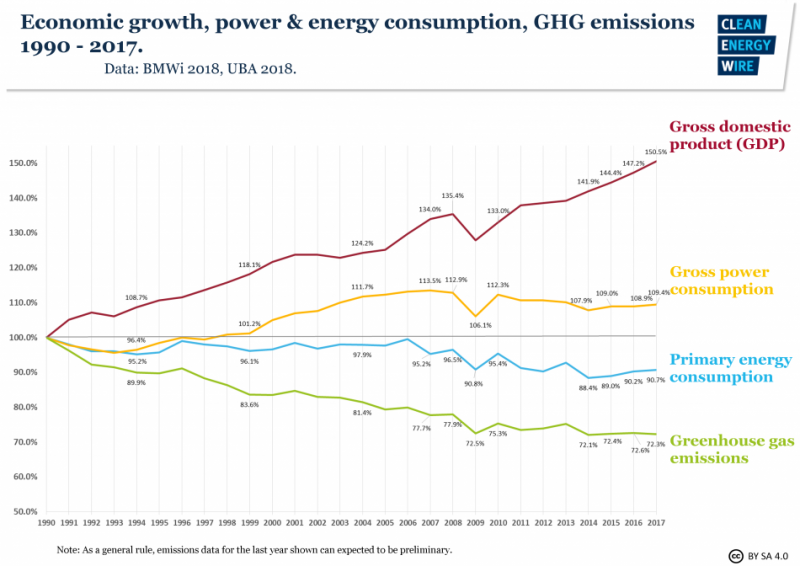 These equations are, however, to be changed. Nuclear phase-out should be accomplished in 2022 with the last reactors, in Isar 2, Emsland and Neckarwestheim 2 plants, shutdown. Yet, renewables have overtaken the electricity generation gap created so far by nuclear infrastructure closure and are likely to mop up the remaining nuclear market share after 2022 with no impact on security of electricity supply.

It appears there is little room for gas plants to manoeuvre except as baseload for RES’ intermittency. However, at the beginning of the year, in addition to nuclear phase-out, Germany’s coal exit commission proposed a pathway towards decommissioning the last coal-fired power plants by 2038. While it is not obvious which energy sources will cover the demand gap, there is a high likelihood that the pace of renewables development will slowdown leaving at least a few percent of the market open to natural gas.

Gas demand growth will come from outside the power sector

Or more. Electricity production is not all. In fact it is only small part of the German gas story, as over 3/4 of this resource is used for other purposes – heating, cooling and heat for industrial processes.

Hence, whilst gas will probably remain in the background for electricity generation discussions, its role in other sectors is far more interesting. A lot will depend on the ability of renewables to respond to energy policy developments, the measure of success of energy efficiency measures and its own technological evolution but in any event, the quick carbon reduction wins combined with increasingly competitive price put gas in a strong position compared with alternatives under current and medium-term market conditions.

The Challenge: overcoming the Energiewende impasse

There is no doubt the Energiewende is in trouble. At the beginning of April 2019, Federal Environment Minister Svenja Schulze said that after four years of stagnation, Germany’s levels of CO2 emissions are finally decreasing. However, as well as being down to higher use of solar and wind energy and lower use of oil, gas and coal, it was also a direct result of freak weather conditions. She stressed that Germany has to implement new energy policy measures in order to get back on track vis-a-vis climate protection. Indeed, ambitious goals set in the framework of the EU energy policies and Paris Agreement will only partially be met by Germany in the next years. It seems that this impasse stems from the fact that they have set too much store by an all-renewable/all-electric approach while devoting less attention to the wider use of energy. In such a situation, the question on the supportive role of gas (after all, the fossil fuel with lowest CO2 emissions) in Germany’s energy transition becomes highly pertinent.

Security of supply and affordability

This imperative for growth is what makes price and security of supply such a pressing issue across the EU but especially in Germany. Angela Merkel admitted in her January 2019 speech, that due to nuclear and coal phase-outs, gas will play a more important role in Germany for another few decades and therefore announced that gas infrastructure is to be expanded in all directions. This kills two birds with one stone.

Firstly, whilst Germany’s gas supply sources have been reliable over in recent years, supply patterns will have to change by 2030.

Domestic gas production (currently catering for around 7 bcm out of 102 bcm consumed) is expected to decrease rapidly and by 12 years’ time only two major suppliers (Russia and Norway) will continue supplying when the Groningen field in the Netherlands will finally stop production. Both Gazprom and Equinor claim they are able to increase supplies to Germany in order to fill the supply gap that might occur but that leaves serious questions concerning security of supply. Germany, like Europe as whole, must diversify its supply to address this – and to maintain a competitive market to manage affordability.

In order to stimulate diversification, in March 2019 the German cabinet agreed on a draft regulatory reform to reduce the costs to private investors willing to build LNG infrastructure. Three projects, in Brunsbuttel, Stade and Wilhelmshaven, are already in the pipeline. What sense does LNG make in a country that has a very well developed gas pipeline grid, numerous interconnectors and is a major European gas hub (planning to merger its two gas market areas)? By acknowledging LNG’s importance for security of supply as well as a solution to cleaner maritime and road transport, the reforms serve as a way to ease tensions with the U.S., counter the risk of tariffs (e.g. on cars) and mitigate against possible Nord Stream 2 sanctions. And of course, import American LNG. Politically and economically, it fits the bill.

Germany has it all to benefit from abundant and relatively cheap gas which in the short and medium term can constitute a flexible friend (combining access via pipeline and LNG transport infrastructure) as well as a temporary remedy (quick win) along the energy transition path. Yet, at least in theory, despite important infrastructural investments, there is little chance of perpetuating the use of this fossil fuel beyond the 2050 milestone of the “extensive greenhouse gas neutrality in Germany”. Being short-termist could result in expensive-to-undo carbon lock-in. Building in diversified, secure competitive gas as renewables’ partner of choice means Germany (like the rest of the EU) needs to think long term…ie post 2050. That means gas has to get clean.

The good news is there are numerous initiatives designed to create favourable conditions for synthetic and renewable gas technology development. These will directly contribute to 2050 decarbonisation goals. Turning clean electricity from RES (with temporary or seasonal oversupply) into energetic gases such as hydrogen or methane is not a new idea. Over 128 power-to-gas research and demonstration projects in Europe are already realized with the aim of testing such possibilities, with, among others, two flagship projects underway in Germany – Uniper in Falkenhagen for methanation and HaSynGas in Brunsbuttel for hydrogen. What is more, the existing and soon-to-be constructed gas infrastructure can be used for the purpose of storage of such carbon-free energy. This repurposing can prove in the future to be more economically viable than building new grid infrastructure, transmission lines and batteries for RES. Not surprisingly, both Russia and Norway want to include decarbonised gas in their export portfolios.

The topic has also reached the EU level. The clean gas and system repurposing idea was recently discussed during the 1-2 April 2019 meeting organized by the Romanian presidency. 17 countries’ delegates signed the Declaration on Sustainable and Smart Gas Infrastructure for Europe. But Germany wasn’t among the signatories (they refused to sign the document claiming it was not ambitious enough), whilst some major German companies did give their support (e.g. Uniper, Ontras).

The Gas 2030 dialogue is Germany’s first move to attempt to answer the most salient questions on the future of gas demand, importance of renewable gas for non-power sectors, cost-effectiveness and the possibility of industrial scale implementation of new gas technologies, etc. It is clear that the fate of the German gas sector will depend on how climate-friendly it becomes and at what price. But it also depends on the capacity of the German authorities to properly guess where political and regulatory intervention is necessary, and where it might be harmful, so that in the short term, the government does not hamper natural gas (necessary for the transition) and in the medium and long term encourages green gas solutions.

Thanks to Heiko Lohmann from ener|gate Gasmarkt for sharing his knowledge and views on this topic.