Heating and Cooling (H&C) is responsible for 50% of energy use in the EU and is still heavily dependent on fossil fuels. The opportunity to change your installed system won’t come up more than a couple of times before 2050 so the choice we make now has a large, lasting effect on the breakdown of the entire energy mix.

H&C is the term used for the vast amounts of energy used to regulate the temperatures of the buildings we live and work in, both residential and commercial. At present in the EU, most of the energy for H&C is produced from fossil fuels with only 19% supplied from renewable energy sources.

When your current system gives up or if you’re starting from scratch, you assess your options and whatever you decide, you have to live with that decision for 15 years or more. That makes it pretty clear why the debate between traditional (mainly gas-fuelled) and alternative systems, such as heat pumps, is so topical. The urgency for getting on the right path is neatly summed up by researcher Lukas Bergmann of consultancy firm Delta Energy and Environment in the New Scientist recently: “we are only two boiler replacements away from 2050”.

In an ideal world we should not be burning fossil fuels to heat, or cool, our homes, offices and industrial spaces. So the proposal that “no more fossil-fuel boilers should be installed after 2035” from the EHPA (the Electric Heat Pump Association which promotes the use of alternative heat pumps and part of the Decarb Heat initiative) is understandable. They argue that, on the basis that their life-cycle is estimated to be around 15 years, conventional installations post 2035 would be counter-productive to the EU’s own 2050, net-zero milestone.

The IEA agrees there is great potential to be tapped into by using heat pumps. Their own figures show they could save 50% of the building sector’s CO2 emissions. They also demonstrate how far off-track the sector is at the moment.

But heat pumps are expensive (maybe 10-times the price of the best, conventional options), need outside space and a supplier with the necessary know-how. With such hurdles and considering efficiency improvements on modern gas boilers as well as the increasing availability of cheap gas (which claims a key role in the journey to net-zero emissions) the choice is not so straight forward.

Modern gas boilers are more efficient than their predecessors for several reasons, but their main advantage is that they are all condensing boilers. All well-maintained boilers burn their fuel very efficiently, but they inevitably lose some heat in the hot gases that escape up the flue. A condensing boiler has a larger heat exchanger, so it recovers more heat, sends cooler gases up the flue and is more efficient. Sometimes the flue gases get so cool that the water vapour in the gas condenses out, hence the name, and even more energy is recovered from the condensing vapour.

As well as these efficiency gains, cost is also a big factor. If you have mains gas, a gas boiler is likely to be the cheapest heating option – up front at least. So much so that if you don’t have a gas supply to your home, it may even be worth getting one if your country and/or local authorities allow!

Low cost, improved efficiency and the fact that gas can play a role as a road-to-net-zero “bridging” fuel all help to explain why we are still most likely to be installing gas condensing boilers.

But there is another factor too which is the role played by installers. Our trade suppliers are often the first port of call; either in a crisis or when planning a new build.

Gas boilers by recognisable brands represent “trusted technology”, well known and understood by our current force of plumbers and plumber’s merchants. Furthermore it has been acknowledged by policymakers that the supply chain is not adequately incentivised when it comes to installing current alternative solutions.

A 2016 UCL report identified that both policy makers and researchers have begun to acknowledge the role of installers. The report says policy makers have outlined the provision of financial incentives, and the development of training and apprenticeship schemes to address the situation.

In short, the report finds that to get low carbon heating technologies into homes and businesses, we need to more thoroughly consider the work of construction professionals.

Domestic heat pumps can cost three times as much, or more, compared with a modern, efficient gas condenser system so the economic case for heat pumps is based on their longer lifetimes (double that of the boilers) and their efficiency.

The EHPA says heat pumps are the most efficient heating and cooling technology around! According to them, for each kW of electricity consumed by a heat pump, about 4kW of thermal energy is generated. This gives them a 300% efficiency score. They compare this with the alternatives:

Note: The idea that heat pump systems are too inefficient or don’t generate enough heat was set straight by the late David MacKay back in 2012. He was one of heat pumps’ early ambassadors, highlighting its 300% potential efficiency. 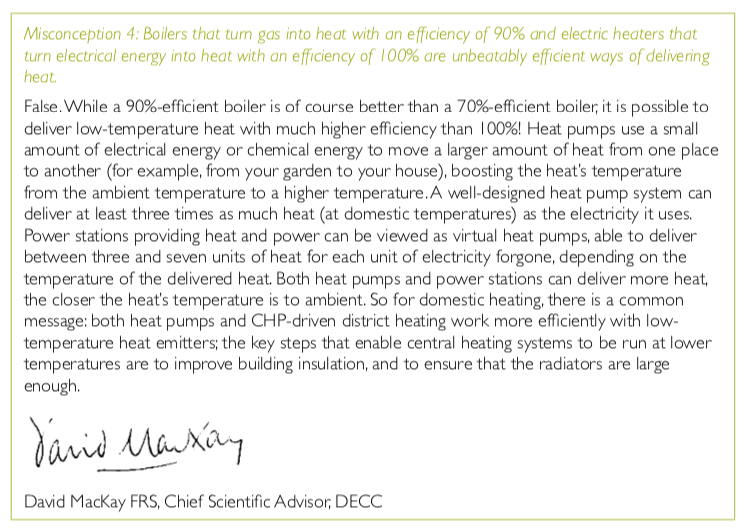 Extract from 2012, UK DECC report “The future of heating”

There are various subsidy schemes available across Europe that can help cover a substantial amount of the up-front cost (see examples for UK, France, Germany and The Netherlands) of a heat pump system but it will still, initially at least, be much higher. Placing the efficiency advantage, the long term cost savings and the fact they are a zero-emission technology in combination, is what makes them viable.

We’re all very aware of what catching a plane does to our carbon footprint so why not in the Heating and Cooling sector too? Opting for a gas solution could lock you in to 15 years, or more, of emissions so a look at sustainable alternatives seems only responsible.

The sheer scale of the heating and cooling sector’s energy requirements makes this apparently simple choice a major part of the 2030/2050 debate on energy mix. At first glance it’s a straight choice, mainly, between gas and renewables but from the point of view of the consumer it is more complex. Finance, available outside space and advice from your local expert will all factor in the decision, not just climate considerations based on fuel choices in an ideal world.