Open the papers and you’ll see that hydrogen-based transport, mobility and infrastructure are securing serious investment. In the past, the high cost of fuelling infrastructure – and “stupid” concept of using electricity to make hydrogen to make electricity – have stalled the advancement of this ultra-versatile clean fuel and energy storage solution. However, thanks to the availability of surplus power from RES and hydrogen’s remarkable flexibility, the numbers are beginning to add up and that means competition for batteries. Mike Scott explains why the money is finally moving hydrogen’s way…

The hydrogen economy has always been a bit like a mirage in the desert – hanging enticingly before us, never seeming to get any nearer. In some ways, this is surprising as it has so many advantages as an energy carrier. There’s lots of it, it produces only water vapour when it is burned, it can be stored for long periods of time – unlike energy stored in batteries– and it’s flexible.

It can be used to produce electricity in fuel cells, it can be used as a transport fuel either by being burnt or in fuel cells and it can be injected into gas grids and so used for heating. When renewable energy is used to split water into hydrogen and oxygen, it is an emissions-free fuel. The technology is well-known, long-standing and proven.

“When renewable energy is used to split water into hydrogen and oxygen, it is an emissions-free fuel”

Given that the focus is now turning to decarbonising heating and transport, where cutting emissions is seen as a much greater challenge than electricity production, it’s amazing that we don’t have a hydrogen economy already.

That phrase, “the hydrogen economy”, illustrates the problems the sector faces though. No-one talks about a battery economy, and yet the battery is spreading like wildfire through the energy landscape. For all their faults of limited duration, expense and the amount of time it takes to charge them, batteries are incredibly convenient and modular – they can have an immediate effect when added to a house, a hotel or a factory with minimal infrastructure.

Build an electric car, put a battery in it and it’s ready to go. Sure, you need charging points, but in extremis, any plug will do. Build a hydrogen car, and you need billions of euros of fuelling infrastructure – which is why you get talk of hydrogen highways and the like.

And yet, these are a long way from reality. As Clean Technica reported in September, “with 21 hydrogen fuelling stations, the greater Los Angeles area has more hydrogen fuelling stations than any other metropolitan area in the world today”. Indeed, all of the 36 hydrogen refuelling stations in the US and Canada are in California, while Hydrogen Tools says that as of the end of 2018, there were just 277 stations globally. The IEA reported that “the global fuel cell electric vehicle car stock reached 8,000 units in 2017, with the United States and Japan accounting for nearly 90% of the global fleet”.

Another problem is that while hydrogen can be produced cleanly, at the moment, much of it is produced using fossil fuels. The only way to make hydrogen produced in this way low-carbon is to use carbon capture and storage technology, which is progressing at a snail’s pace.

Hydrogen has some fairly high-profile detractors. Elon Musk, founder of Tesla, famously said that hydrogen as a vehicle fuel was “incredibly dumb” – although as a maker of electric cars, you would expect him to say that. But a more dispassionate observer, Michael Liebreich, founder of Bloomberg New Energy Finance, agrees, saying that “If you have electricity and you want to drive somewhere, wasting half of it generating hydrogen to turn back into electricity is a supremely stupid thing to do.”

South Korea is to spend more than $2 billion over five years to create hydrogen infrastructure to enable fuel cell vehicles, including 310 hydrogen stations by 2022 to supply 16,000 fuel cell vehicles, factories to build fuel cell cars and buses, fuel cell stacks and hydrogen storage systems. It joins Japan, which is planning to use the Tokyo 2020 Olympic Games to showcase its own hydrogen vision, with the city’s governor Yoichi Masuzoe saying: “The 1964 Tokyo Olympics left the Shinkansen high-speed train system as its legacy. The upcoming Olympics will leave a hydrogen society as its legacy.” Toyota, Honda and Hyundai are the only major carmakers currently investing heavily in fuel cell vehicles.

“hydrogen technologies are reaching maturity – in or around 2025, clean hydrogen could be cost-competitive with existing industrial feedstocks such as natural gas and batteries” CSIRO, Australia

The UK, France and Australia have also announced hydrogen programmes, with CSIRO, Australia’s national science agency saying that “hydrogen technologies are reaching maturity, with the narrative now shifting from R&D to market activation. In or around 2025, clean hydrogen could be cost-competitive with existing industrial feedstocks such as natural gas, and energy carriers such as batteries in many applications.” 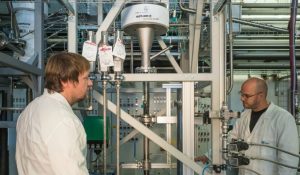 In the past, hydrogen has been a victim of its own versatility, a jack of all trades but master of none. But now its wide range of uses is starting to work to its advantage. As well as being a long-lasting store of energy and its utility in heating, transport and power, it is a solution to the problem of what to do with surplus renewable power that would otherwise be spilled; it adds weight to the case for carbon capture and storage; it can help oil and gas companies to make use of their existing infrastructure – whether that is fuel stations or gas pipelines; and it provides a solution to issues such as air pollution and how to fuel long distance heavy transport in an environmentally-friendly way.

But as the UK’s Policy Exchange think tank said in a recent report: “The versatility of hydrogen offers big opportunities to help overcome some of the challenges the UK faces when transitioning to a low carbon economy – but we are far from realising them yet.

“Two issues need addressing. Firstly, we need to focus on getting cost-effective, scalable and sustainable production methods to reach mass market. Targeting investment towards reducing the high cost of producing large volumes of low carbon hydrogen is crucial. Secondly, we must decide the most appropriate applications of hydrogen within our economy, given potential uses are likely to be highly interconnected and this will have implications for the energy system.”