The geopolitics of renewables: how should countries adapt to the new global energy realities?

How the battle between renewables and fossil fuels is playing out: reports from the front

The China vs. U.S. (solar) power fight: China way ahead, but could U.S. make a comeback?

Geopolitics of geo-engineering: will the planet be hacked?

Eon chief puts carbon tax back on the agenda – of Member States, not Brussels

Nuclear power: Poland and UK want to jump ahead, Austria steps on the brakes

Last year, Germany for the first time became the EU country, together with Denmark, with the highest electricity prices, notes the German website Strom Report on the basis of figures from Eurostat.

Over the last ten years, German electricity prices, including taxes and grid charges, rose 39% to 30.5 eurocents/kWh.

Prices across the EU vary enormously, ranging from 9.6 cts/kWh in Bulgaria to 30.5 cts/kWh in Germany and Denmark.

In most EU countries, electricity prices went up significantly over the last decade, the data show: 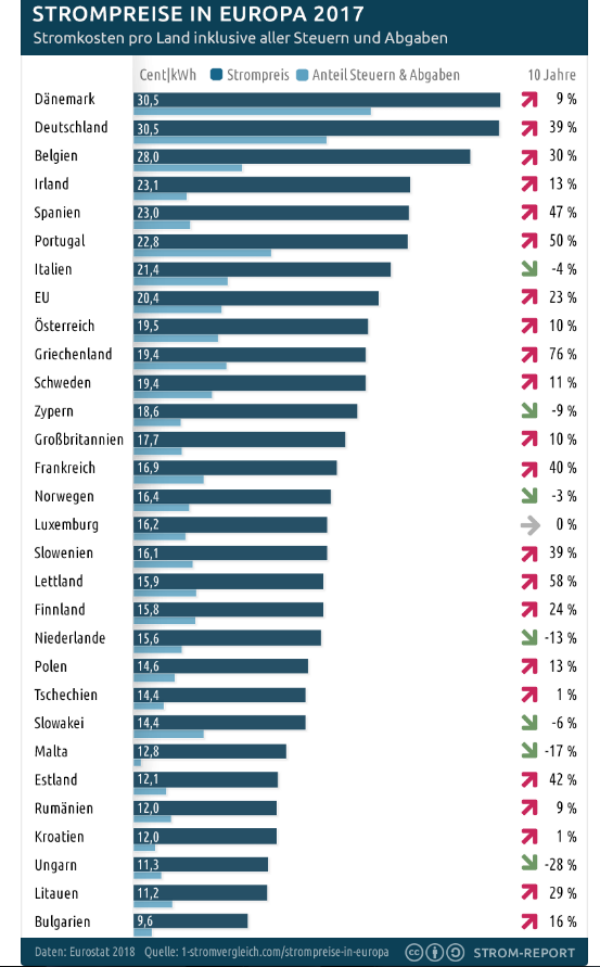 On average in the EU prices rose 23%. Some of the highest rises occurred in Greece, Spain and Portugal – related no doubt to the economic crisis that hit those countries hard and presumably led governments to raise taxes.

Among North West European countries, the Netherlands recorded the greatest decline in prices – 13%. As a Dutch citizen and electricity consumer, I would venture to guess that this may have something to do with the highly competitive nature of the Dutch electricity market. The Netherlands was one of the few countries to require complete ownership unbundling of grids from production and supply. The result has been strong competition: consumers are inundated with favourable price offers.

Strom Report also notes that energy poverty is on the rise in Europe. Some 42% of Greek households are unable to pay their energy bills, according to Eurostat data. In Germany this is around 4%, in the Netherlands 2.7%. On average in the EU, 9.1% of consumers suffer from energy poverty.

Based on preliminary figures for 2017, electricity from renewables grew by a record amount, writes Craig Morris on the Energy Transition/The Global Energiewende, a blog published by the Heinrich Böll foundation.

“Since the first nuclear reactor was shut down in 2003 as a part of Germany’s nuclear phaseout, electricity from renewables has increased almost twice as much as nuclear power has shrunk”, observes Morris. “Coal power – both from lignite and hard coal – has also dropped. The lights have stayed on.” 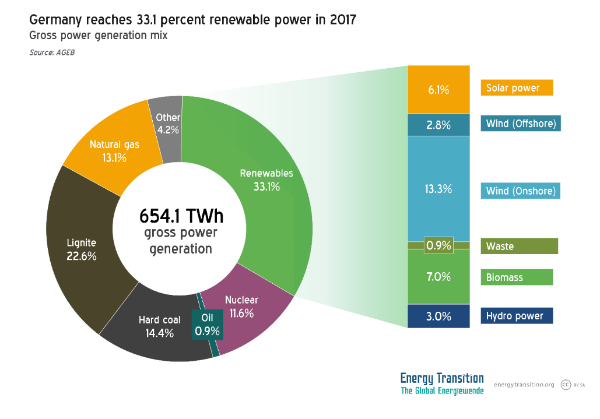 The 29 TWh increase from renewables in 2017 sets an annual record, notes Morris. “That growth is equivalent to around 5% of German power demand…. If Germany were to continue to add 5% renewables annually, it would reach 100% in only 13 years – by 2030.”

But Morris does not think the growth will continue: “The government recently adopted auctions to keep further growth in check; the volume tendered is limited, and time frames are generous. This year might not be so bad, but the wind sector is expected to dry up in 2019 and 2020 because so many recently awarded projects have until 2021 and 2022 to be completed. The share of renewables in 2020 may not look so different from 2017.”

“One main reason for this slowdown is technical constraints”, Morris notes: “going 100% renewable (or even 50%) is not trivial. Baseload plants will have to disappear completely even as sufficient dispatchable capacity remains available. Utility umbrella group BDEW is thus calling for more new gas turbines to be constructed (in German), and companies like Uniper (formerly Eon) is currently investigating its options (in German). So are municipal utilities, such as the one in Cottbus that recently announced plans to switch from locally produced lignite to natural gas (in German).

Gas-fired power was once again slightly up in 2017, writes Morris. It “has grown by more than a quarter since 2013. Hard coal has fallen by just over a quarter during the same time frame. The decrease in lignite is only 8% because renewables are not yet forcing those plants to ramp much.”

Nuclear fell by nearly 11% in 2017. “One reactor was shut down at the end of December, but that decrease was only slight. A bigger factor was the extended downtime at Brokdorf, a reactor that made history last year by being the first nuclear plant to shut down specifically because of damage caused by ramping. Other reactors, such as France’s Civaux, have also experienced difficulties possibly related to load-following, but ramping was never clearly reported as the cause for any other reactor.”

Power exports also set a record for the fifth year in a row, reaching 53 TWh. Net power exports provide space for dispatchable conventional power generators (coal, gas, and nuclear). Renewable electricity has priority dispatch on the German grid, meaning that clean power is consumed before conventional power. Wind and solar in particular react to the weather, not to demand, so foreign demand cannot increase these sources. 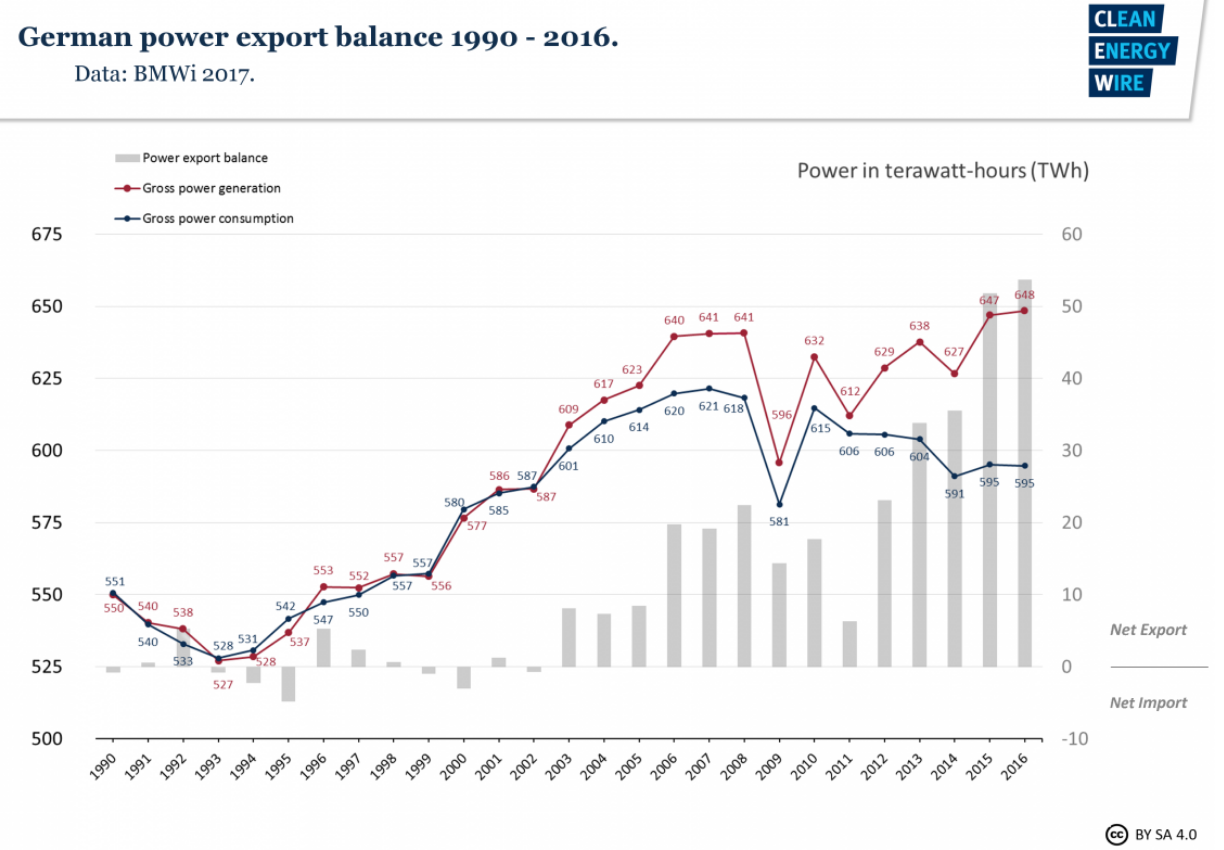 Nuclear power: Poland and UK want to jump ahead, Austria steps on the brakes

“Generation IV high-temperature gas-cooled reactor (HTGR) technology is the best option for deployment in Poland because it offers an affordable and reliable heat source for domestic industry and will help reduce the country’s dependency on imported gas”, a report for the Polish ministry of energy said, according to nuclear news agency NucNet.

The report (you can find an English summary here), prepared by a team from the Polish National Centre for Nuclear Research (NCBJ) and commissioned by the ministry in July 2016, “said HTGR deployment could also reduce CO2 emissions by replacing coal-fired boilers and pave the way for potential HTGR exports by Poland’s nuclear industry.”

The report found that the HTGR’s main technological advantage over other high-temperature reactor designs lies in its “inherent safety”, which prevents core melting, and its technological maturity, notes NucNet. It recommends “the establishment of a special purpose company, owned mainly by Polish industrial heat consumers, which would develop a preconception study based on the findings of the NCBJ team and carry out negotiations with potential foreign partners.”

Poland does not have any nuclear units in commercial operation, but is considering a new-build programme, notes NucNet.

NucNet reports that “According to the US-based NGNP Industry Alliance, whose aim is to commercialise HTGR technology, safety “at the highest levels” is designed into the HTGR. No harmful release of radioactive material under any conditions is assured by design. The International Atomic Energy Agency said significant efforts are underway to develop HTGRs. All these reactors are primarily fuelled by TRISO (tri iso-structural) coated particles.”

However, as nuclear journalist Dan Yurman points out, to opt for a Generation IV reactor would be challenging: “So far only China has made significant progress with TRISO fueled HTGRs. That nation is considering its HTGR designs for export.”

Yurman adds that “Poland has struggled to develop comprehensive project and especially financial plans to build a full size nuclear reactor to replace coal fired plants.  The date for project start has been pushed into the future several times.  This announcement is the first time a smaller and potentially less costly unit has been put in the picture.”

In the UK there are also voices being raised in favour of “next-generation” nuclear projects, in particular for “small modular reactors” (SMRs). The UK government has indicated it is ready to support SMRs, if industry comes up with feasible plans.

So far, however, there is more talk than action around SMRs. Adding to the talk is a new report from “leading centre-right think tank” Policy Exchange, released on 25 January.

The report notes that SMRs “could be a crucial technology in the drive to decarbonise our energy system.”

The reason: “The increased take-up of electric vehicles, the general electrification of our energy system and the need to decarbonise all sectors of our economy mean we need new low carbon sources of electricity and heat to replace existing capacity and meet rising future demands. The diffuse and intermittent nature of solar and wind means that we cannot rely on them for 100% of our energy needs …  Buying in electricity through interconnectors from other Western European nations will be increasingly difficult as our neighbours also turn to wind and solar and so have less capacity to export, while the battery storage capability to back up renewables could cost up to £1 trillion.”

Within the EU there are strong differences of opinion, though, on the desirability of nuclear power. Reuters reports that the Austrian government “is planning to sue the European Commission for allowing Hungary to expand its PAKS atomic plant”.

“We in the government have agreed that there are sufficient reasons to sue (the Commission),” a spokesman for Austrian Sustainability Minister Elisabeth Koestinger said, according to Reuters. “EU assistance is only permissible when it is built on common interest. For us, nuclear energy is neither a sustainable form of energy supply, nor is it an answer to climate change.”

Hungary aims to start construction on the reactors this year, with the first facility expected set for completion in 2025. “The PAKS nuclear plant is the guarantee for providing a cheap, reliable and safe supply of electricity to Hungarian people and businesses,” Hungarian Prime Minister Viktor Orban’s office said in a statement. “Therefore, the Hungarian government will stick to its plan to ensure the maintenance of capacity at the Paks plant,” it said, adding that the lawsuit would not affect work on the project.

Austria vainly launched a similar legal action against the European Commission in 2015 over its backing of British plans for a 16 billion pound ($22.24 billion) development of the Hinkley Point C nuclear power plant.

So far most reports on the consequences of Brexit for the energy sector have been fairly sanguine. But there are signs of increasing nervousness.

In a major new report, published on 29 January, the energy and environment subcommittee of the House of Lords hat Brexit “will put the UK’s current frictionless trade in energy with the EU at risk”.

The Committee calls on Government “to set out how it will work with the EU to anticipate and manage supply shortages, and to assess what impact leaving the Internal Energy Market would have on the price paid by consumers for their energy.”

The Committee “also heard that the UK’s ability to build future nuclear generation sites, including Hinkley Point C, is in doubt if access to specialist EU workers is curtailed, and that failure to replace the provisions of the Euratom Treaty by the time the UK leaves the EU could result in the UK being unable to import nuclear materials.”

The Committee found “that EU investment has made a significant contribution to constructing and maintaining a secure energy system in the UK, and that replacing this funding will be critical to ensuring sufficient infrastructure is in place to enable future energy trading. The report concludes that, post-Brexit, the UK may be more vulnerable to energy shortages in the event of extreme weather or unplanned generation outages, and asks the Government to set out how it will work with the EU to anticipate and manage such conditions.”

Chair of the Committee Lord Teverson said: “Individuals and businesses across the UK depend on a reliable and affordable supply of energy. In recent years, the UK has achieved such a supply in partnership with the EU, working with other Member States to make cross-border trade in energy easier and cheaper.”

“Over the course of the inquiry the Committee heard benefits of the UK’s current energy relationship with the EU, and the Minister acknowledged these benefits when he stated his hope that Brexit would result in as little change as possible. It remains unclear, however, how this can be achieved, without remaining in the single market, IEM and the other bodies that develop and implement the EU’s energy policy.”

Britain currently imports around 5-6% of its electricity through power links with France, the Netherlands and Ireland, and imports 40% of its gas through pipelines from Norway and The Netherlands.