Despite progress in energy storage technology, batteries still make up a significant part of the weight for devices ranging from laptops to cars. But what if the bodywork of the car was also the battery. And what if it was a lightweight carbon fibre. Say hello to the carbon fibre battery car… and aircraft?

Today carbon fibre is a well known construction material. But researchers have discovered that carbon fibre can also work as battery electrodes. 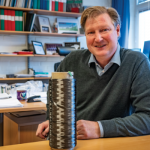 Leif Asp, at Chalmers University of Technology, has led a team of researchers in Sweden, Italy and France to uncover the electrochemical properties of carbon fibres. He says their discovery could one day power vehicles while reducing their weights by as much as 50%. Their report can be found in Multifunctional Materials.

In other words, high-strength carbon fibres have poor electrochemical performance, and high-performance electrochemical carbon fibres are not strong. A compromise had to be found that allowed for strength of structure, and allowed for the battery power. What surprised Asp was that the compromise was far less than expected. “We now know how multifunctional carbon fibres should be manufactured to attain a high energy storage capacity, while also ensuring sufficient stiffness,” Asp says.

The results suggest a promising outlook for using carbon fibre car bodies that also act as the car battery. Although the battery performance itself does not compare with state of the art car batteries, the resulting overall weight reduction could mean the carbon fibre battery car will one day outperform the traditional EV car.

However Asp points out that it can be difficult to make these benefits apparent to commercial car manufacturers. Their people tend to work specifically on one function at a time: energy storage, or car bodies, but never bring the two problems together. It’s difficult to get them to see it as a single problem, and fix it.

“The key is to optimize vehicles at system level – based on the weight, strength, stiffness, and electrochemical properties,” Asp explains. “That is something of a new way of thinking for the automotive sector, which is more used to optimizing individual components. Structural batteries may perhaps not become as efficient as traditional batteries, but since they have a structural load-bearing capability, very large gains can be made at system level.” Nevertheless, the researchers are now collaborating with car companies.

And aviation companies too! Asp explains that for the aviation industry, it may be necessary to increase the thickness of the carbon fibre composites to compensate for the reduced stiffness of the structural batteries. But this would, in turn, also increase their energy storage capacity – another positive trade-off for aircraft that must spend long hours in the air before they can recharge.