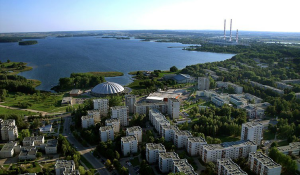 As Lithuania and the Baltic Nations turn away from nuclear power and towards increased solar and wind energy production, one city is shifting towards a new energy future.

Elektrenai, or Electricity City, once powered an entire nation. Its three, soaring red-and-white smokestacks were its pride and joy, and heralded in popular songs and propaganda films. The city around the power plant was built to house the workers who ensured enough oil and gas was burned to keep Lithuania’s lights on night and day.

These days, Lithuania and its neighbours have a different vision of the future: One built on clean, green renewable power.

Elektrenai’s mayor, Kestutis Vaitukaitis, has long wanted to develop the city’s lakeside area into a tourist destination. The smokestacks clearly visible from his office window – and from vehicles arriving on the state’s main two-lane highway – aren’t your typical resort view. But Vaitukaitis says the power plant’s largest and oldest smokestacks are too costly to maintain and will be torn down next year.

Likewise, the plant’s modern 450-megawatt gas turbine – installed in 2012 at a cost of €329 million – will be relegated to backup generation for grid-system operators in the Lithuanian capital of Vilnius.

Elektrenai will rely on the plant’s new biomass boiler for domestic heating, but its electricity will no longer be home-grown, something many locals struggle to accept.

The mayor admits most of Elektrenai’s 14,000 residents are against demolishing the plant. For the older generation who spent their working lives there, he attributes this to “nostalgia for the Soviet times of their youth when, with your own hands you built something.”

Younger people argue that gas is a relatively clean source of power. If the smokestacks aren’t pumping out pollution any more, they don’t see the need to tear down the city’s iconic landmark. Yet as a symbol of fossil fuel, they no longer fit with the country’s image.

Cities like Elektrenai are at a crossroads moment, argues the mayor. A future built on a diverse array of green energy flows is coming. The blueprint is now self-evident. The only question is how fast they can get there.

Lithuania is remaking itself into a corridor for power flows, stretching from Finland and Sweden to the Central European countries via Poland. The small country is at the heart of one of the best-interconnected regions in Europe, with cross-border gas pipelines and electrical transmission cables setting a model for the European Union’s goal of a barrier-free continental energy system.

Lithuania is remaking itself into a corridor for power flows, stretching from Finland and Sweden to the Central European countries via Poland

After six years’ debate, Lithuania passed in June a national energy strategy considered by analysts to be among the most progressive in Europe. The country is aiming to have 45% of its final energy consumption by 2030 come from renewables, joining several other countries — Spain, Sweden, Italy and Portugal – that are pledging to surpass the EU-wide 32% renewables target.

Significantly, the strategy excludes any mention of nuclear energy, ending a fractious debate which had split the political class ever since the closure in 2009 of its Soviet-era Ignalina nuclear plant.

Analysts say Lithuania is responding to the falling cost of wind and solar technology, as well as hefty EU investment in the region’s cross-border interconnectors. Renewables are expected to grow to 7 TWh by 2030, and to 18 TWh by 2050, with wind energy covering between 50 and 55 percent of this.

It has also been helped by a booming domestic bioenergy industry which relies on wood burning for upwards of 70% of the country’s heat production.

That Lithuania burnishes its green credentials by relying on large biomass numbers for fuel heating is not without controversy. 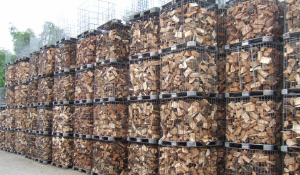 Environmentalists charge the government with allowing clearcutting of old growth forests which are then replanted with fast-growing plantation trees. Yet only 10% of woods sold on the market are for biomass, according to Lithuanian NGO Miskas. Rather, most of the country’s deforestation is tied to wood product manufacturing, said Marija Dabrisiute, a forest campaigner at Miskas

Going forward, wind is to be Lithuania’s main source of electricity, while any increase in renewable heat is to come from a number of new technologies, including solar heating, heat pumps, municipal waste heat and possibly surplus wind power.

The government also believes it can create a favorable climate for investment in rooftop solar, according to Martynas Nagevicius, president of the Lithuanian Renewable Energy Confederation (LREC). The goal is to incentivise half a million electricity consumers to get involved in green power generation, either feeding power back on to the grid from home photovoltaic installations through a “prosumer” scheme, or by joining energy cooperatives.

Nagevicius says this will be possible because of Lithuania’s modernising infrastructure. New cross-border transmission lines are a big part of the story, but so are investments in new transformers and district heating systems, as well as the launch of a floating liquified natural gas (LNG) terminal in the port of Klaipeda.

“We can both balance power and supply power to Norway [via Sweden], and take it back from Norway when we need it, and to Poland and back,” said Nagevicius. “That is a really crazy good environment to increase variable power production like wind and solar.”

Still there are several major hurdles that lie ahead.

While Lithuania and the other Baltic states are fully integrated into the Nordic power market in terms of electricity trading, their physical grids remain a part of the Russian power system. Moscow central dispatch still influences Baltic power flows.

Consequently, full integration to the European electricity grid requires the cutting of all transmission lines to Russia, Belarus and Kaliningrad, a process known as desynchronisation. Also looming ahead is the completion of an additional gas line to Poland and a substantial increase in wind generation.

Such a boost in renewables will require increased backup, either in the form of batteries or balancing services offered by gas turbines that can be turned on or off in a matter of hours. Smaller, more flexible gas engines are the future, but larger units like the one in Elektrenai can also play a role.

Modernising and expanding the Kruonis Pumped Storage Plant into a giant battery is another option, said Dominykas Tuckus, chairman of the advisory board at Lieutovos Energjija, the operator of both the Kruonis and Elektrenai Power Plants.

“Our main asset is that a big part of the system for balancing renewables has already been constructed,” added Tuckus, a reference to the Russian-built Kruonis and Elektrenai plants.

Staring the Baltic region in the face is the 2025 deadline set by the European Commission for synchronisation with the European electricity grid. The true test lies ahead, with a diminished, secondary role already set for Elektrenai.