Is nuclear power the past – or the future?

Can electric cars really stabilise – and power – the grid?

EU agrees overhaul of A-G energy label: victim of its own success

The big winner in the Gazprom anti-trust case: the market

Engie has the hots for EVs

How climate-friendly is shale gas really?

Just short of 55GW of new wind-power capacity was installed worldwide in 2016, according to the Global Wind Energy Council (GWEC). That was down on 2015’s record number, reports Windpower Monthly, but “higher than any other year”.

The global total now stands at more than 487GW, nearly half of which — 241GW — has been added in the past five years. Note that this compares to some 2,000 GW of coal-fired power which exists around the world. 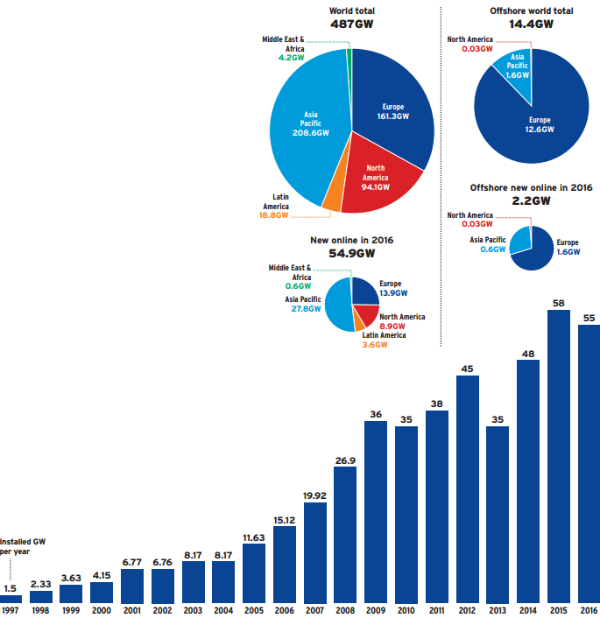 China’s installed wind-power capacity now stands at close to 170GW, more than a third of the global total, although according to the Chinese National Energy Administration, less than 150GW is actually online and operating.

India added a record 3.6GW in 2016, a figure only exceeded by China, the U.S. and Germany. Cumulative capacity in India is close to 29GW.

“There are signs of life in the Australian wind-power market with several projects in development,” notes Windpower Monthly, “but only 140MW of operating capacity was added last year. Growth in Japan remains sluggish, with only 196MW installed in 2016. It was outstripped by South Korea (201MW) for the first time.”

The magazine notes that “Germany provided nearly 40% of Europe’s new wind capacity in 2016, adding 5.4GW to take its total to just over 50GW. That was slightly down on 2015, but still more than three times that of any other country. France and Turkey supplied the region’s other onshore success stories, adding around 1.6GW and 1.4GW respectively, well up on 2015’s additions. There was solid if unspectacular growth in Sweden, Denmark and Ireland, too. But there was little to celebrate across most of central and eastern Europe.”

“Poland and Romania have driven wind power expansion in this area in the recent past, but the Polish administration’s anti-onshore wind policy has begun to bite, with new capacity falling from 2015’s 1,266MW to last year’s 682MW, while Romania’s confidence in meeting its 2020 renewable targets has stifled investment in wind power. The Spanish market remains moribund, with just 49MW added to the grid last year, and there are few signs of significant growth in Italy. The UK added 736MW in 2016, a reasonable performance given that only 56MW of this was offshore, but little is being added to the onshore pipeline following the government’s withdrawal of support.”

Morocco looks set to provide the best opportunities for wind developers in Africa, according to Windpower Monthly. “Only 95MW was installed in 2016, but an Enel-led consortium is working on 850MW over five projects, with Siemens providing the turbines, while Vestas hardware will power the 120MW Khalladi project, which is scheduled for commissioning this year. Egypt is aiming for 7GW of wind power by 2022, but progress has been slow. The government has secured funding for a 200MW project and plans to launch a tender later this year. South Africa’s wind boom has been on hold, with state utility Eskom dragging its heels over signing power purchase agreements with wind developers. However, 418MW was installed last year to take cumulative capacity to 1,471MW.”

For offshore wind “it was a fairly quiet year in Europe, with the market-leading UK adding only 56MW in 2016, although around 700MW is at an advanced stage of construction and will be commissioned this year. Germany installed 813MW to take its offshore fleet to over 4GW, while the Netherlands added 691MW, most of which was provided by the commissioning of the 600MW Gemini project.”

A new report from research and consulting firm GlobalData has forecast that the global hydropower market will increase from $70.9 billion in 2017 to $86.2 billion by 2025, reports CleanTechnica.

That’s modest growth, from a high base level.

According to GlobalData’s newest report, the global hydropower market is likely to benefit from a major boost in investment which will see an increase in the number of installations, especially in countries such as China, Brazil, and India.

In 2015, 33 gigawatts (GW) worth of new hydropower capacity was installed, according to figures provided by the International Hydropower Association (which has yet to publish 2016 numbers).

According to GlobalData, cumulative global hydropower installations reached 1,211.3 GW in 2016 (four times as much as wind power capacity – and of course hydropower has much higher output), and they are expected to reach 1,691 GW by 2025. Global hydropower demand will grow from 21.7 million GWh in 2017 to over 27 million GWh by 2025.

“Large hydropower plants are the major source of new capacity and baseload power, but pumped storage is growing and is helping meet peak power demand”, notes Cleantechnica. “In terms of individual countries, China will continue to dominate market share, with installed hydropower capacity set to rise from 341 GW in 2016 to 442 GW by 2020.”

Engie has the hots for EVs

My friend and colleague Zachary Shahan over at Cleantechnica.com is a great enthusiast for electric cars – and knows more about this topic than many “experts”. If you are interested in this market, I recommend following Zach’s writings.

As Zach observed, “The story here is much bigger than it probably seems on the surface …. The first thing to note — since I know that even many EV leaders aren’t familiar with the name EV-Box — is that EV-Box is actually a global leader in the production of EV charging stations (EVSE).”

Of course the market for EV chargers is heavily fragmented, as Zach notes, so it’s difficult to speak of real global leaders. “There are some corporate giants — Siemens, GE, Bosch — who have been offering products for a few years, but many markets are actually dominated by niche homegrown players who are specifically focused on selling EV charging stations in local or regional markets. Clipper Creek is an obvious example in the U.S.”

Nevertheless, with the aid of Engie, EV-Box may be the future number one in charging. “Aside from developing a good charging solution, one thing EV-Box has benefited from is a hot EV market around its home base — the Netherlands”, writes Zach. “This is one of the top EV markets in the world, which has surely helped EV-Box to scale up fairly quickly from its Dutch garage roots (e.g., Amsterdam’s superb on-street EV charging network uses EV-Box charging stations).” 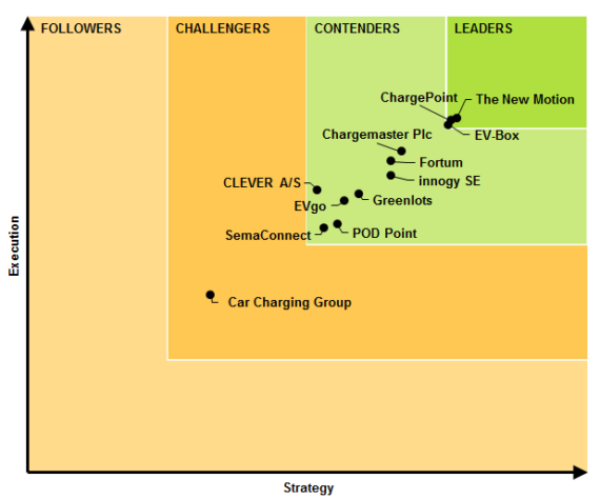 But there is more to come, writes Zach. “Engie is certainly not acquiring the company with a small vision. Engie is a truly global energy company, with a presence in 70 countries. It is a legitimate energy giant. Engie seems to now have an obsessive focus on the endgame, in business unit after business unit and product after product.”

“Engie’s acquisition of EV-Box is a sign that the French giant, which is in essence ~200 years old, intends to integrate the charging company into its move to remain a global energy leader. Remaining a global energy leader is a dramatic challenge for companies like Engie, given how quickly the sector is changing and how hard it is for large corporations to move in nimble and shape-shifting ways. But that’s a key to the acquisition.”

Zach spoke with Thierry Lepercq, executive VP in charge of Research, Technology and Innovation at Engie – and one of the true visionaries in the company, according to Zach. “Thierry made it clear to me that he sees this market as an extremely ripe one. It is on the verge of massive growth.” According to Zach, “Engie realizes that now is the time to become an EV charging leader. If not now, the market will be set and closed within a few years.”

How climate-friendly is shale gas really?

You know the line from our American friends: always telling us that thanks to their shale gas revolution, they are bringing down their greenhouse gas emissions. Replacing coal with gas after all, right?

That may be true as far as CO2 is concerned, but what about methane, a much more potent greenhouse gas?

EDF Energy Exchange reports that according to a new peer-reviewed paper in Environmental Science and Technology methane emissions from natural gas power plants and oil refineries “may be significantly higher than accounted for in current inventories.” EDF by the way has been working with the energy industry for years in the broader U.S. effort to tackle the problem of methane emissions.

By multiplying total CO2 emitted annually by all U.S. natural gas power plants and refineries (as tallied by EPA) by the methane-to-CO2 emission ratio determined in the study, the authors estimate yearly methane emissions from the nation’s refineries and gas-fired power plants are twenty times higher than currently reported.”

Oops. Maybe shale gas is not so climate-friendly after all?

How did the researchers, from Purdue University, come to their conclusions? They “flew an airborne chemistry laboratory over natural gas-fueled power plants and refineries to measure greenhouse emissions, using a mass balance technique to quantify methane and carbon dioxide emissions at three natural gas power plants and three refineries. Although the results are based on a relatively small number of samples, the findings point out a need for more focus on leak detection and repair efforts“, writes EDF.

EDF notes that “most of the methane emissions were associated not with the CO2 plumes from the combustion stacks, but rather from other parts of the facilities (such as compressors, steam turbines, stream boilers and condensers), which indicates that natural gas is leaking before it is burned to generate power. The combustion stack sources, which the EPA GHG Inventory currently estimates to have only minor emissions, may actually contribute only about ten to twenty percent of the total methane emissions from the facility.”

What does this mean for natural gas? As EDF notes, “natural gas has been touted as a cleaner replacement fuel for coal, and is an important tool in moving to a lower-carbon energy mix. Power plants currently use more than one third of natural gas consumed in the U.S. and the volume used is expected to increase as market forces drive the replacement of coal with cheaper natural gas. But if natural gas is going to deliver on its promise, methane emissions due to leaks, venting, and flaring need to be kept to a minimum. Finding and fixing leaks from all points in the oil and gas value chain continue to offer the most bang for the buck in achieving this goal.”

What goes for the U.S. goes for Europe too of course. Here too gas is touted as a lower-carbon replacement for coal, which it may be. But is anyone measuring the methane emissions from our gas-fired power plants?