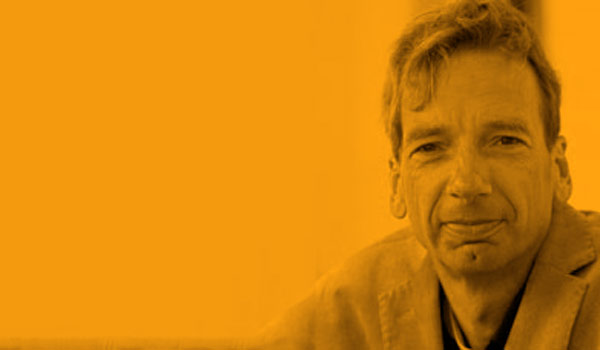 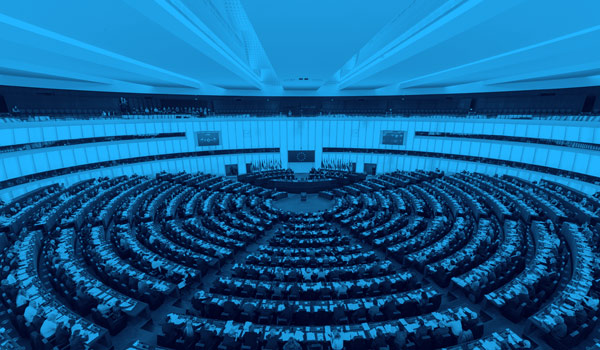 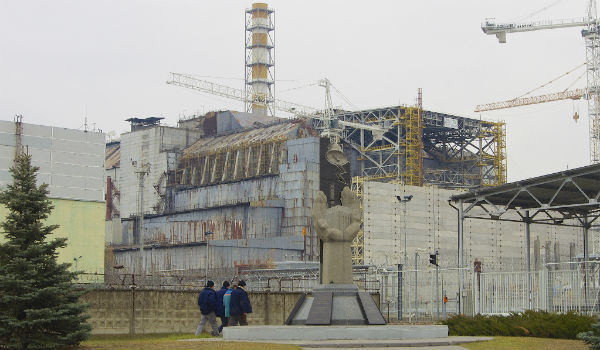 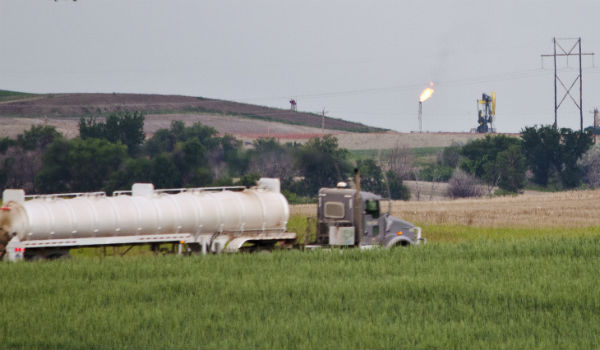 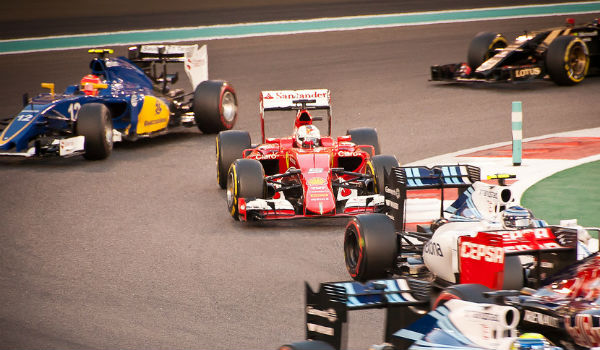 Can oil giants be successful in 'new energies'? 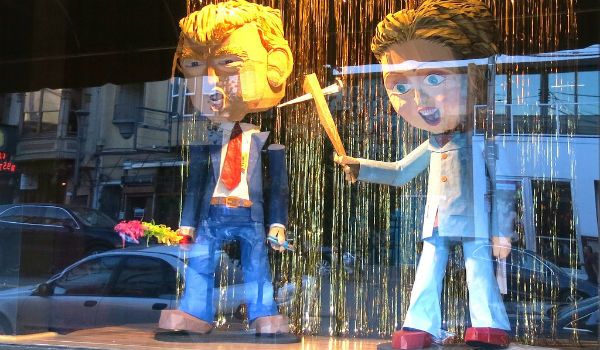 Will Republicans and Democrats ever agree on climate policy?

I remember visiting Saudi Arabia in 2006 with a party of journalists. Government representatives treated us to grandiose plans of flourishing green megacities, ports, business districts, financial centres and tourist resorts that were to arise on the coast of the Red Sea over the next decade. A huge contrast with the air pollution, poverty and resentment that we could see and feel on the streets of Riyadh and the oppressive atmosphere that forbade men and women even to mingle at McDonald’s.

Nothing ever came of these Red Sea Dubai’s of course. You can still see what the flagship project, King Abdullah Economic City. looks like here on the internet. You won’t find it when you go there.

But hold on, the crown prince, Mohammed bin Salman, who has in recent times managed to become the de-facto ruler of Saudi Arabia, has recently presented a Vision for 2030 that is a lot like the Vision that was presented to us back then. It holds out the promise of a “vibrant society”, “dynamic” cities, environmental sustainability, “rewarding opportunities”, “providing equal opportunities”, “attracting talent”, privatising government services, launching new economic sectors, embracing “transparency”, and so on. (By the way, he Salman has also promised to revive the King Abdullah Economic City project.)

Analysts from western think tanks, like McKinsey and The Atlantic Council, believe that it may well be possible for Saudi Arabia to move to this bright future “beyond oil”. Jilles van den Beukel, a former geoscientist with Shell, takes a more sceptical view. In an article he wrote for Energy Post, he argues that Bin Salman’s Vision 2030 is completely unrealistic. It should be seen, he writes, in the light of the crown prince’s grab for power: with his plan he is trying to reach out to a young population in a bid to become too popular to be deposed. But the Vision is no more than a pipe dream: grandiose aspirations not grounded in the reality of Saudi life.

The Saudi people, writes Van den Beukel, would be much better served with piecemeal, gradual, realistic reforms, such as allowing women to drive.This would do much more for the country – and the stability of the world – than Vision 2030. You can read this important article here: http://www.energypost.eu/saudi-arabia-needs-realism-2030-vision/

I might add that given the huge inequalities in the country and the explosive mixture of narrow-minded religious leaders and corrupt rulers, I agree with Jilles. In fact, I regard this as one of the great, underestimated benefits of the renewable energy revolution: the move to a low-carbon energy system will in time wipe out the Oil Kingdoms of this world, with all of their corruption and abuse.

If an Energiewende in Saudi Arabia seems still to be a little way beyond the horizon, Germany’s Energiewende seems to be marching full steam ahead. You may have read that on 8 May, Germany was briefly powered 95% with renewable electricity. This was presented by some (including State Secretary for Economic Affairs and Energy Rainer Baake) as a great victory for the Energiewende.

However, Craig Morris, writing at the Energy Transition blog of the Heinrich Böll Foundation – and a great supporter of the Energiewende – puts this remarkable feat into some perspective.

First of all he notes that it is not entirely clear what the exact level of renewable power was (you can see the numbers on the website of Agora Energiewende – if I interpret the graph correctly, the level was around 90%).

German electricity use on May 8, 2016 – source: Agora Energiewende

Second, he points out that “we are only talking about electricity, not energy”. The power sector makes up only around 20% of German energy demand (no surprise if you have ever driven down the Autobahn in the Ruhr area). Last year renewables made up only 15% of total energy consumption in Germany.

The fact is, says Morris, that Germany’s power plant fleet “cannot easily produce less than 20 GW at any time”. This is because conventional power plants cannot be simply operated below a certain production level. “The real news, therefore”, says Morris, “is not that Germany may have reached a record high level of renewable electricity, but that its baseload power plants are in real trouble.”

According to Morris, this is the issue that German policymakers should turn to first: get rid of the country’s surplus baseload power.

According to The Guardian newspaper, World Bank president Jim Yong Kim recently warned that “plans to build more coal-fired power plants in Asia would be ‘a disaster for the planet’.” He did not quite say that in his official speech – he merely said “inaction” would be a “disaster” – but The Guardian quotes him as saying to reporters that “If Vietnam goes forward with 40 GW of coal, if the entire region [of south and east Asia] implements the coal-based plans right now, I think we are finished.”

According to Platts Energy, China alone is planning to build 150 GW of new coal plants, notes The Guardian. By 2020 that is. This is on top of the 270 GW it built over the last five years. If you’re not good at numbers, think of 1 GW as one 1 power plant. So that’s 420 new coal power plants. Countries like India, Vietnam and Indonesia are also looking to build large numbers of coal power plants.

John Roome, the World Bank’s most senior climate change official, stated that “if all of the business-as-usual coal-fired power plants in India, China, Vietnam and Indonesia came online that would take up … almost all of the carbon budget [i.e. to keep global warming below 2C].”

By the way, David Hone, Chief Climate Change Advisor with Shell, recently pointed out in his interesting blog that the effect of coal use on the climate was already well known before the first World War.

In 1912, Hone writes, a small country newspaper in Australia carried a story entitled: “Coal Consumption Affecing Climate”. Here is what it said: 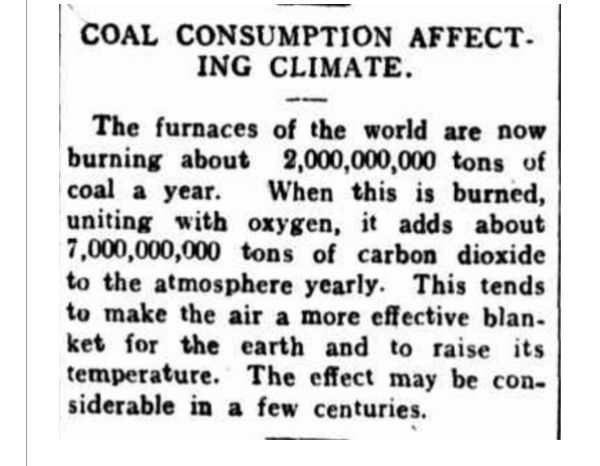 It’s not clear yet whether all these coal plants will be built – or whether the renewables revolution will come in time to prevent that. What does seem clear is that it will take somewhat of a miracle to get these Asian countries (and don’t forget countries like Turkey) to “pivot” to a clean energy future, as the World Bank wants to do.

Which means that, as many industry experts have been saying for a long time, we still need a massive effort at carbon capture and storage (CCS). According to the International Energy Agency (IEA), one-fifth of emission reductions in 2050 will need to come from CCS in the power and industrial sectors, equating to approximately 3,400 (!) projects. There are only a handful of CCS projects operational today.

The “challenges” of CCS are well-known. The process to extract CO2 requires energy, which leads to a substantial efficiency loss. In a gas-fired power plant 10% of the capacity is used to capture the CO2. And then the CO2 still has to be transported and stored underground of course. This means that CCS only has a real chance if carbon gets a steep price in the market.

However, there may be new hope for CCS. US oil company ExxonMobil has announced that it is investing in a new technology, with a partner, FuelCell Energy, which could “substantially improve CCS efficiency, effectiveness and affordability”, in particular for natural gas-fired power plants, but also for coal power plants.

ExxonMobil’s new technology puts the CO2 in a carbonate fuel cell, which is then used to generate power. According to the company, a 500 MW power plant using such a fuel cell would be able to generate an additional 120 MW of power.

This sounds promising, although the technology would still cost money. According to an article in MIT Technology Review, it would add about 2 cents per kWh to the cost of electricity (excluding the cost of transport and storage). Nor has the technology been proven yet. ExxonMobil has said it will first build a small-scale test pilot on a kilowatt-scale, to be be followed by a 2.5 MW pilot plant, before it can be scaled up any further. In other words, it is still a few years away, at best.

And let’s hope it’s not just a PR effort on the part of Exxon, a company that’s not known for its climate consciousness. In its press release, ExxonMobil proudly states that it is “a leader in CCS applications”. They say that last year they “captured 6.9 million metric tons of carbon dioxide for sequestration – the equivalent of eliminating the annual greenhouse gas emissions of more than 1 million passenger vehicles.” Which sounds impressive, except that according to their own information, they also put 122 million tons of CO2 into the air. And that’s just from their operations, not from their oil as it’s used by people in their cars.

A gas-fired power station that does not emit CO2

Nevertheless, Exxon’s announcement is a reminder that innovation is not only going ahead in “clean” energies, but also in the fossil fuel sector. Who knows what the results will be?

In this context an even more sensational announcement was made recently by another US company, Net Power. This company, which is backed by some pretty big names in the industry, including Toshiba and Exelon, promises a brand new type of gas-fired power plant that emits no CO2 at all.

Net Power uses a technology called the Allam Cycle,which has a combustion turbine running on carbon dioxide. “The system burns natural gas with oxygen, as opposed to air, and uses high-pressure carbon dioxide, as opposed to inefficient steam like most power plants, to drive a turbine”, says the company. “Net Power produces only electricity, liquid water and pipeline-ready CO2, all while operating as efficiently as the best natural gas power plants available today.”

The “pipeline-ready CO2” can be stored – or used for industrial purposes. The company is also looking into the possibility to use the technology with coal-fired power plants.

Net Power does not shy away from ambitious promises: “For the first time cleaner energy does not mean more expensive energy, and, as a result, our global climate goals are within reach.” That may be a bit exaggerated, but they have started on the construction of a 50 MW demonstration plant, which should be finished next year.

It is not clear yet how much Net Power’s system will cost, nor does it include a solution for the storage of CO2. Still it does show that the future of energy may yet look very different from what most of us think today.