LNG terminals give rise to unexpected boom in the Baltics

France: no turning back on nuclear scaledown

Behind the latest bioenergy clash

Climate change laws multiply (but not in the U.S.)

Oklahoma shaken up by fracking

Sun and wind intermittent? Coal and gas can fail too

Climate change laws multiply (but not in the U.S.)

If you need an overview of climate change laws and policies, look no further. The Grantham Research Institute on Climate Change and the Environment together with the Sabin Center on Climate Change Law, have published a database which includes more than 1200 policies across 164 countries, reports Carbon Brief.

The database can be explored through an interactive map, which you can find if you follow the link. Not so surprisingly, Carbon Brief finds that “the number of climate laws continues to grow rapidly. In 1997, the database shows, there were just 60 laws in place, with the figure having risen 20-fold to reach 1,260 today. During that time, the stock of climate laws has doubled every four or five years.” 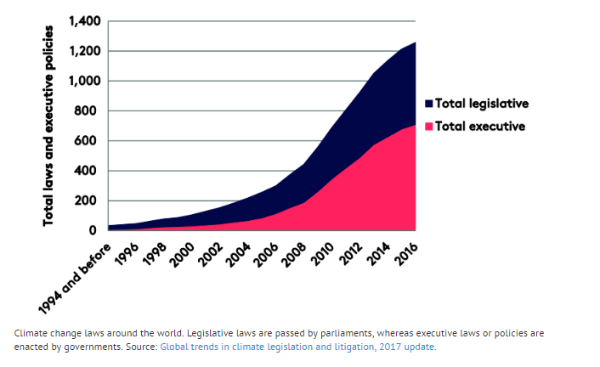 In addition to the listing of laws and policies, the database also includes narratives for each of the 164 countries covered, describing their approach to climate change policy, along with metrics on its emissions, GDP and losses due to natural disasters. However, as is often the case with ambitious databases like these, a lot of the indicators are way out of date.

One conclusion that Professor Sam Frankhauser, one of the researchers, draws is that “to reach 2 degrees Celsius it’s probably a question of stronger laws, not more laws. Most of the countries we looked at have a framework to deal with climate change, that they have enacted. What we have to do now is to strengthen those frameworks, implement stronger policies, have fewer exemptions, higher carbon prices, more focused support on energy efficiency, better prohibitions on land use.”

Another important takeaway comes from Sabin Center director Professor Michael Gerrard, who notes that climate change litigation will likely increase in the coming years, including against corporations. He notes: “Another area where I think we will begin to see lawsuits is lawsuits against governments and corporations that failed to prepare for climate change. So, for example, if a building or a bridge or something like that is destroyed, or severely damaged in a storm, and the magnitude of the storm could’ve been and should’ve been foreseen before the building was built, there may be claims against architects, engineers, builders, for not reflecting these foreseeable risks in their designs.”

A similar point was made recently by researchers from the University of Calgary on Energy Post, who compare tobacco liability to climate change liability and find the two have much in common.

Not that any of this makes much of an impression on the Trump administration. The Guardian reported recently that the U.S. executive “has taken a hatchet to climate change language across government websites”.

“Trump is deleting climate change, one site at a time”, notes The Guardian, describing how the Administration is altering information on climate change across the many websites of the U.S. government.

It could make for an interesting court case in the future. According to The Guardian, “Groups such as DataRefuge and the Environmental Data and Governance Initiative (EDGI) have swung into action to monitor and archive climate and other data, just in case. EDGI uses a team of volunteer analysts to track changes to around 25,000 pages across multiple government agencies.”

In the meantime, China is taking over the climate lead from the U.S. In a high-profile One Belt One Road meeting in Beijing on 15 May (I am sure you have heard of One Belt One Road by now – Energy Post reported on this in 2014!), attended by leaders and officials from around the world (excluding some countries like India, Japan and the U.S.), China issued a communique that called on all parties to the One Belt One Road initiative to implement the Paris Agreement in full.

The Swiss people have voted in favour of a law proposed by the government which will lead to a phaseout of nuclear power and substantial public support for renewables and energy efficiency. 58% of the voters said yes to the government’s “Energy Strategy 2050” proposal.

The law will ban the building of new nuclear plants. It also provides subsidies for struggling utilities, which currently rely on hydropower and whose costs exceed Europe’s wholesale prices. Alpiq, BKW, AXP and other utilities will share a 120 million franc annual subsidy.

Debate on the “Energy Strategy 2050” law had focused on what customers and taxpayers will pay for the measures and whether a four-fold rise in solar and wind power by 2035, as envisaged in the law, can deliver reliable supplies.

The government has said the package would cost the average family 40 francs more a year, based on a higher grid surcharge to fund renewable subsidies, reports Reuters. Critics said a family of four would pay 3,200 Swiss francs ($3,290) in extra annual costs, while more intermittent wind and solar energy would mean a greater reliance on imported electricity. Switzerland was a net power importer in 2016. It has five nuclear plants, which will be gradually shut down, the first one in 2019.

The electrical and mechanical engineering sector, which opposed the law, said it was important to see how it would be implemented.

Oklahoma shaken up by fracking

The State of Oklahoma has become one of the most seismically active regions in the United States. The seismic activity “is induced by the injection of massive amounts of wastewater into the subsurface. The water originates from oil and gas production at shale reservoirs, where nonconventional extraction techniques are used, including hydraulic fracturing (often referred to as fracking)”, write researchers Robert Lacassin and Raphael Grandin on the Conversation.

Based on recent findings, Lacassin and Grandin present an alarming picture of the consequences of fracking in Oklahoma. They note that the state is located on the edge of the Great Plains, far away from the boundary of any tectonic plates.

The researchers from the IPGP institute in Paris have found out that the injection of wastewater at depths of 2 to 3 kilometres is leading to the destabilisation of seismic faults at far greater depths. They present various mechanisms how this would work. What is particularly alarming is that faults show up that have not been mapped before. This means estimating the magnitude of future earthquakes is very uncertain. In the past large earthquakes have occurred in the entire area of the central United States. Buildings are not prepared to withstand earthquakes.

Ironically, Scott Pruit, who is now head of the Environmental Protection Agency (EPA), was Attorney General in Oklahoma, in which capacity he “worked to limit federal interventions aimed to restrain the ecological impact of oil extraction activity in Oklahoma. The role of oil lobbies in providing a backdrop for the policies promoted by Scott Pruitt is subject to many questions in the local and national media.”

The implications of the new findings are clear: more should be done to limit wastewater injection, but it is unlikely that more will be done. The lessons of Oklahoma will not be lost on European observers, however.

Sun and wind intermittent? Coal and gas can fail too

Critics of solar and wind power never fail to point out that they are “unreliable” due to their intermittency. Coal, gas and nuclear power plants are needed to provide reliable backup, so the story goes.

What is often omitted, though, is that traditional power plants can fail too. In Australia renewables have been strongly criticized for allegedly causing power outages (the story is in reality more complex). It now turns out, however, that coal and gas power plants did not do so well either when they were faced with difficult circumstances – a heatwave in this instance.

Giles Parkinson of Reneweconomy reports that a new report from the AER – the Australian Energy Regulator – “looks at the soaring electricity prices on February 12, 2017, when high temperatures across the state [of Queensland] caused record demand despite the day being a Sunday, when most business and much manufacturing was closed.”

The principal reason, the AER notes, “was the sudden withdrawal of more than 790MW of coal and gas capacity – all due to technical faults related to the heat”.

Parkinson writes that “the plants’ absence nearly created a shortfall of supply, with emergency back-up called on as the 5-minute price soared to more than $13,000/MWh on 11 occasions between 4.35pm and 7.05pm, to meet surging demand that tipped at a record 9,369MW.”

According to Parkinson, “The AER report on the events of February 12 is the latest of a string of reports noting how coal and gas plants have failed, or lost capacity due to problems in the heat. Just a few days earlier, on February 10 in NSW, the loss of 1,000MW of coal capacity and the sudden failure of another 1,200MW of gas generation nearly tipped the state into widespread blackouts. Just four days before that, on February 6, a total of 3,000MW of coal and gas capacity was lost in NSW and Queensland, mostly due to heat related faults. And on March 3, the sudden failure of the two major gas generators almost caused another system black in South Australia.”

Parkinson notes that “on these occasions, authorities said that renewable energy was to thank for keeping the lights on. Other analysis has pointed out that rooftop solar has saved significant amounts in wholesale electricity costs, with one report putting the savings in NSW during the heatwave at nearly $1 billion.”

“That’s ironic”, he adds, “because much of the mainstream media attention around the risk of blackouts and soaring prices has centred around the role of wind and solar – but it is the performance of the coal and gas generators that is making grid operators nervous.”