Eurelectric: blockchain is risky, a hype, and needs more oversight – but not everyone agrees

Technologies, markets, states, the public – who and what is driving the energy transition?

European Commission: one-quarter of new budget to go to climate

SDG7 stands for Sustainable Development Goal number 7, which is “Ensure access, affordable, reliable, sustainable and modern energy for all”.

Despite this positive spin, the report is not very encouraging at all. Not only is “the world not on track to meet the global energy targets”, some of the findings are remarkably disappointing.

Thus, for example, the share of renewable energyis actually decliningin many countries, as this chart shows: 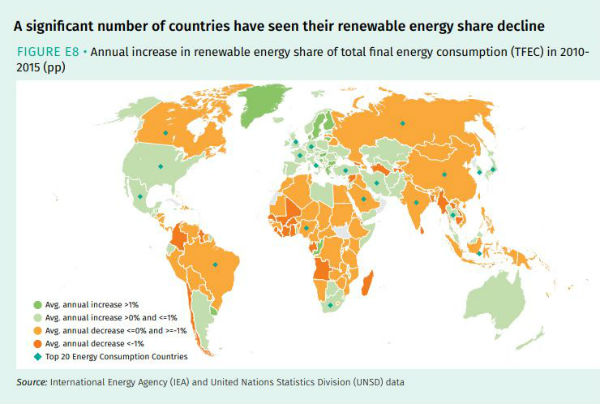 With regard to energy intensity, performance is mixed: 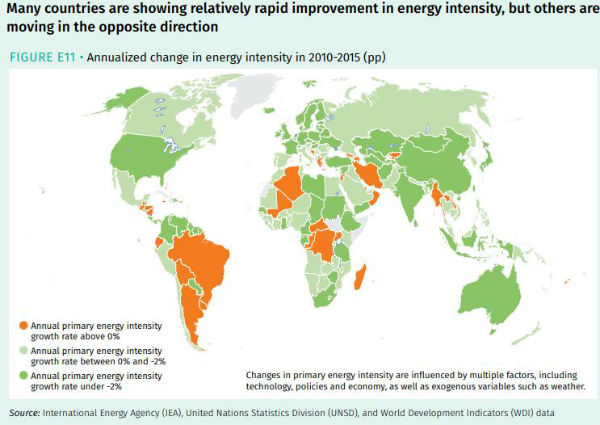 In a discussion of the report, Caroline Lee, IEA Energy and Climate Change Policy Analyst, notes that last year global CO2 emissions rose 1.4%, “after remaining flat for three years, reaching a historic high of 32.5 Gt indicating that the stall in emissions from 2014-2016 does not yet reflect a peak. Though the 2017 emissions rise is moderate compared to historical rates, it heightens the already monumental challenge ahead. IEA analysis shows that emissions must peak around 2020 then show a steep decline afterwards to meet Paris Agreement goals.”

This increase in emissions reflects strong underlying growth in energy demand, which grew an estimated 2.1% in 2017, double the rate of increase in 2016. “While energy intensity –primary energy demand per unit of gross domestic product –has improved over time, this improvement slowed to 1.7% in 2017, compared with an average of 2.3% over the previous three years, and only half the annual improvement rate consistent with delivering the Paris Agreement goals.”

It gets worse. “The second critical factor”, writes Lee, “is the carbon intensity of energy supply, which tracks CO2emissions per unit of total primary energy supply. In 2017, the Energy Sector Carbon Intensity Index (ESCII) increased for the first time in three years as fossil fuels met over 70% of the growth in energy demand.”

In fact, “over the past three decades the ESCII has barely changed, indicating the energy supply has not become any ‘cleaner on average over time. While significant progress has been made in deploying renewables, in particular solar PV and wind, the deployment of low-carbon energy has not kept up with energy demand growth. This remains a crucial challenge for the energy sector, as under an IEA scenario compatible with meeting Paris Agreement goals, the ESCII drops 22% by 2030.”

Nothwithstanding the EU’s claimed “leadership”on climate policy, last year CO2 emissions in the EU increased by 1.8%, according to early estimates from Eurostat published on 4 May. 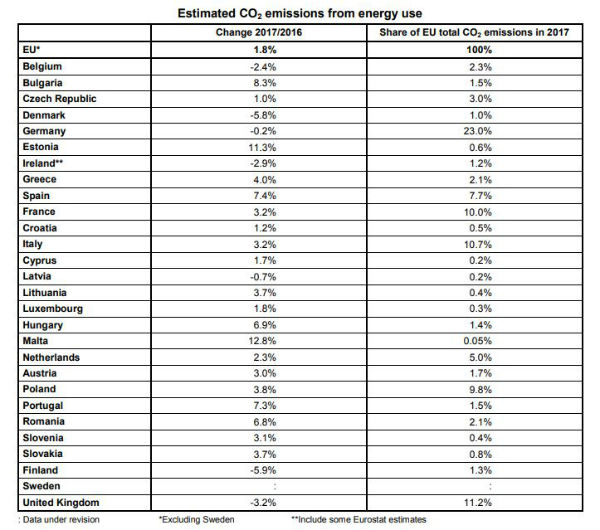 Eurostat notes that “imports and exports of energy products have an impact on CO2 emissions in the country where fossil fuels are burned: for example if coal is imported this leads to an increase in emissions, while if electricity is imported, it has no direct effect on emissions in the importing country, as these would be reported in the exporting country where it is produced.”

“An amazing transformation has taken place on the dunes below Morocco’s sun-blasted High Atlas mountains”, so begins a report written by Adam Jezard for the website of the famous World Economic Forum (WEF).“Against the yellow sand thousands of curved mirrors, each taller than a human, stand in rows. These are part of a solar-power generating plant that is rapidly changing how the whole continent produces its electricity. The mirrors cover an area of roughly 1.4 million square metres, about the same size as the French capital city of Paris.”

Nevertheless, according to Jezard, “the solar farm, near the city of Ouarzazate –known as the gateway to the desert –could also be the doorway to a new era of cleaner energy production in Africa.”

The Concentrated Solar Power (CSP) plant, called Noor, an Arabic word meaning “light”, “could mark the dawn of a new industry for a country that until recently imported 97% of its energy needs. In the very near future, Morocco aims to become an exporter of power supplies to Europe, as well as to elsewhere on the African continent and the wider Arab-speaking world.”

A little bit of the Desertec ideal still turns out to be alive!

Mustapha Bakkoury, head of the Moroccan Agency for Sustainable Energy, said in February that Morocco plans to generate 42% of its energy from renewables by 2020, rising to 52% by 2030, with solar, wind and hydropower each providing a third of the total, notes the article.

The Noor site has used “innovative methods to generate and store the sun’s rays, particularly the latest developments in concentrated solar power. The humming, tracking mirrors of the first two phases concentrate the sun’s rays onto a synthetic oil that runs through pipes and heats it to 350°C (662°F), creating water vapour that drives a turbine-powered generator. This is similar to the way fossil fuels are used to generate electricity but replaces the carbon dioxide-making fuels with sunlight as the power source.”

“But Noor 3 will consist of a single large tower surrounded by about seven thousand flat mirrors that will track and reflect the sun’s rays towards a receiver at its pinnacle. Molten salts inside the tower will capture and store the heat, so there will be no need for the synthetic oil. Experts say this is a more efficient way to store the energy of the sun’s heat and needs much less space than the current arrays of mirrors.”

“Peak demand is reached after the sun has set, and phases 1 and 2 store some of the energy in molten sands. These can keep producing power for up to three hours. However, the storage capacity in later phases is expected to rise to between seven and eight hours after sundown.”

The Danish Ministry of Energy, Utilities and Climate has recently launched a new energy initiative –“Energy –for a Green Denmark”.

Jesper Berggreen, writing on Cleantechnica, summarizes the main measures the government wants to take to achieve the goals:

The government also proposes “a special focus on wind”:

Surprisingly, perhaps, the government also proposes a substantial reduction of electricity taxes. Denmark has some of the highest electricity taxes in the world, but the revenues go into the general Danish budget.

The government plan also contains energy efficiency measures and plans to improve the flexibility of the grid and the integration of renewable energies: “The ambition of the government is to ensure that Denmark has the most integrated, market-based and flexible energy system in Europe, with efficient energy utilisation across sectors and with a continued strong security of supply.”

Nevertheless,“Alongside its high green ambitions, the government wants to see continued utilisation of Denmark’s oil and gas resources in the North Sea for maximum benefit to Danish society”.

Not to be outdone, the major opposition party, the Social Democrats, have published their own energy and climate planwhich is even more ambitious than that of the government. It is called: “Denmark will once again be a green superpower”.

The plan of the Social-Democrats is to be free of fossil fuels by 2045 instead of 2050. It also contains a target of target of 500,000 green cars (electric cars, plug-in hybrids, and hydrogen cars) by 2030, as compared to 12,000 on the roads today vs. 3 million fossil fueled cars. The next elections in Denmark are in June next year at the latest.