Nuclear power: a drop in the bucket (at best)

For those readers who believe nuclear power can save the world from climate change, it offers a discouraging reality check.

Not only is the report less upbeat about the prospects of nuclear power than previous years’reports, even its most optimistic scenario shows nuclear power delivering just 6% of global electricity demand in 2050.

“Nuclear power’s electricity generating capacity risks shrinking in the coming decades as ageing reactors are retired and the industry struggles with reduced competitiveness”, is how the IAEA summed up its own report.

The new projections in Energy, Electricity and Nuclear Power Estimates for the Period up to 2050 suggest “that nuclear power may struggle to maintain its current place in the world’s energy mix,” says the IAEA.

Nuclear power produced about 10% of the world’s electricity in 2017, notes the IAEA. The world’s 455 operating nuclear power reactors have a record level of 399.8 GW total net installed capacity.

The report offers two scenarios, a low estimate and a high estimate.

In the low case, the world nuclear electrical generating capacity is projected to gradually decline until 2040 and then rebound to the 2030 level by 2050.

However, the high case, which represents almost a doubling of current capacity, the share of nuclear electrical generating capacity in the world total electrical capacity will still only be about 6% by the middle of the century.

Note that this 6% relates only to power production. In terms of total energy demand, the share of nuclear energy will be even lower, as can be inferred from this chart, which shows expected electricity and energy consumption: 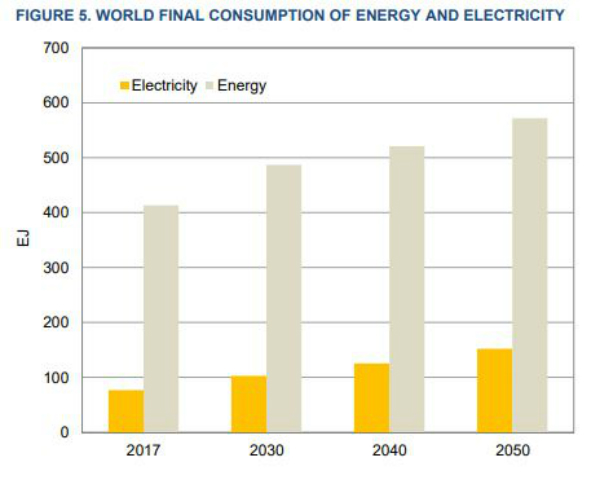 In other words, even according to the industry’s own “high”projections, nuclear power won’t be more than a drop in the bucket of energy supply. It is important to remember this when discussing solutions for the climate change problem. Nuclear power may make a positive contribution to reducing greenhouse gas emissions, but –even if the industry’s own projections are exceeded, e.g. in the unlikely case that nuclear power capacity will be tripled or quadrupled –it will still not be more than a modest contribution.

And note that the IAEA has in the past consistently overestimated nuclear power capacity growth, as can be seen in this table: 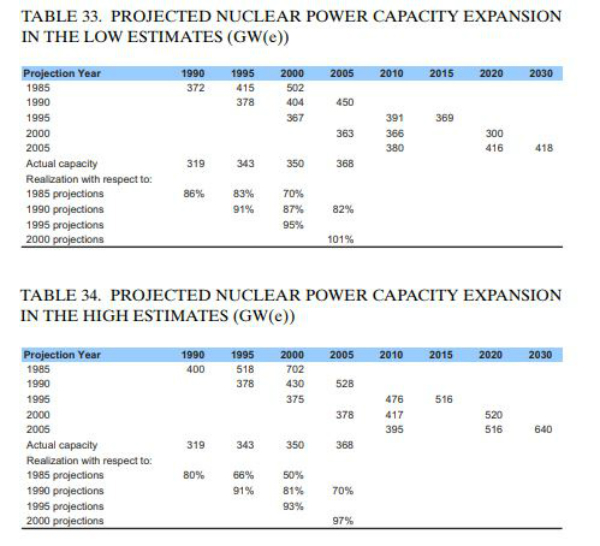 The industry hopes that with these new technologies, which are supposed to be more efficient and safer and produce less waste, nuclear power can get a new lease on life.

And there are some encouraging signs in this direction. For example, World Nuclear News reports that “Bipartisan legislation designed to drive US nuclear innovation including the commercialisation of advanced reactors has gone forward to be signed into law by President Donald Trump after approval by the House of Representatives. Congress has also approved a USD121 million increase in funding for US nuclear R&D for fiscal 2019.”

As one example of this type of nuclear innovation, in the U.S. Terrestrial Energy has partnered with utility Southern Company and several US Department of Energy national laboratories to investigate the production of hydrogen using its Integral Molten Salt Reactor (IMSR).

However, the IMSR is not even built yet. Terrestrial aims to commercialise the design of this small 400 MW reactor in the 2020s. So there is still a long way ahead.

Indeed, according to some skeptics (including some nuclear advocates) the hope of a new generation of advanced reactors is false.

In a new article in the Bulletin of Atomic Scientists, two researchers from the George Washington University, Lindsay Krall and Allison Macfarlane, even argue that molten salt reactors and sodium-cooled fast reactors, far from producing less waste, as their proponents claim, “will actually exacerbate spent fuel storage and disposal issues”.

And it gets worse for nuclear fans (sorry, I can’t help it!).

A pro-nuclear documentary film has been released (its premiere was held last year and it will become online on 18 October 2018), called The New Fire. Directed by David Schumacher, it proclaims that “the next-generation reactors currently in development may actually be key to avoiding global catastrophe. The young entrepreneurs heading this energy revolution realize they’re up against more than the climate clock –they need to convince all of us that the new nuclear is safe and achievable.”

Unfortunately for Nolan, however, and for the makers of the film, on 25 September it was announced that Transatomic Power is shutting down. There goes another nuclear hope.

Meanwhile, in the UK, whose government hopes to position the country as a production and research center for Small Modular Reactors (SMRs), the Guardian has revealed that the companies behind the MSRs “have asked for billions of pounds of taxpayers’ money to build their first UK projects, according to an official document.”

The Guardian notes that “Advocates for small modular reactors (SMRs) argue they are more affordable and less risky than conventional large-scale nuclear plants, and therefore able to compete with the falling costs of windfarms and solar power. But the nuclear industry’s claims that the mini plants would be a cheap option for producing low-carbon power appear to be undermined by the significant sums it has been asking of ministers.”

“Some firms have been calling for as much as £3.6bn to fund construction costs, according to a government-commissioned report, released under freedom of information rules. Companies also wanted up to £480m of public money to help steer their reactor designs through the regulatory approval process, which is a cost usually paid by nuclear companies”, writes the Guardian.

Despite all this bad news, let’s not forget that nuclear power is not dead yet. So for the fans of pub quizzes here are two tables from the IAEA report showing nuclear electricity production per country in absolute and relative numbers: 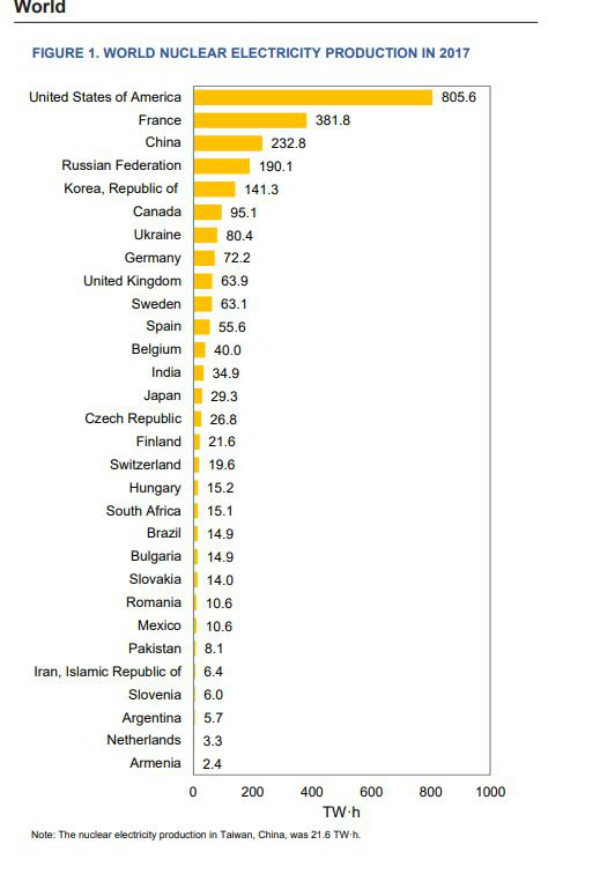 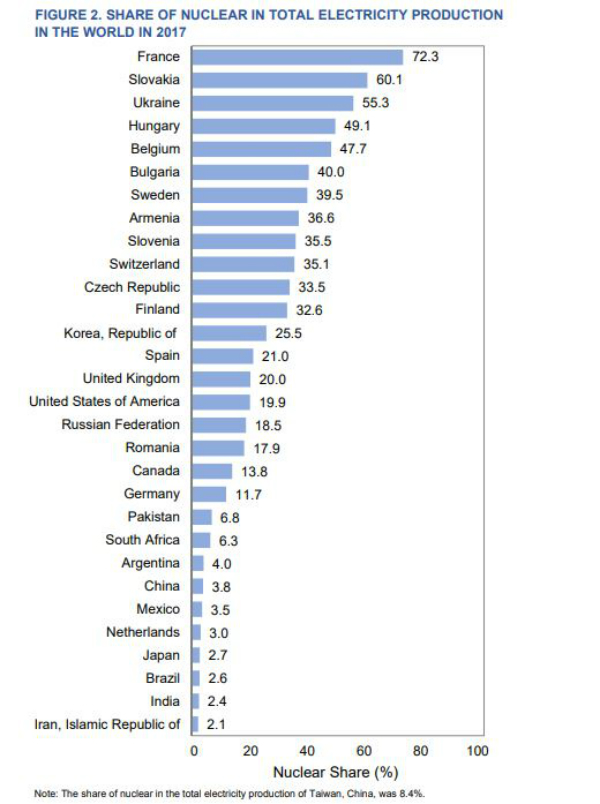