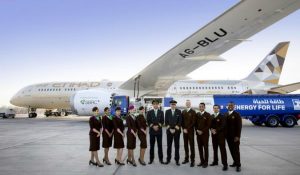 If you were trying to find a link between fish farms, saltwater plants known as halophytes and mangrove forests, it’s unlikely that renewable jet fuel would be near the top of your list.

Yet these three elements are being combined in a project in Abu Dhabi to develop “a clean, alternative aviation fuel” that has been used for the first time in a commercial flight, from the emirate to Amsterdam. The biofuel made up only a tiny percentage of the flight’s fuel load but is the first step in the initiative’s ambitious aim to create a bioenergy industry that can be sited in arid coastal regions, producing both food and fuel without using land that is needed to grow crops or polluting the oceans.

The fuel is derived from a saltwater-tolerant species called Salicornia, whose seeds produce oil when crushed. But the first, rather unlikely, stage of the process is a fish farm, which will produce local species such as Nile perch, as well as shrimp. The fish farm is based on land rather than in the sea, with seawater pumped into pools where the fish will be farmed.

“The SEAS is a pioneering project – the world’s first desert bionetwork to produce food and fuel from seawater supplies in arid land” Dr Alejandro Ríos, SBRC 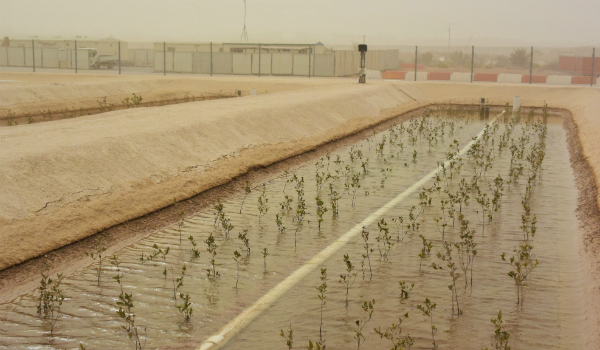 Young mangrove plants filter the run-off from the fish farm

One of the main issues for fish farms is what to do with the waste that is produced – in this project, known as the Seawater Energy and Agriculture System (SEAS), the waste from the fish farm is used as a fertiliser and irrigation for the Salicornia. The water will then flow from the halophyte ‘fields’ into mangrove wetlands, which help to clean the water, protect coastlines from storms, store carbon and provide a habitat for marine life and can be used for bioenergy.

“The SEAS is a pioneering project – the world’s first desert bionetwork to produce food and fuel from seawater supplies in arid land,” said Dr Alejandro Ríos, director of the Sustainable Bioenergy Research Consortium.

“This was the first time that ADNOC had ever refined biofuel, so it’s a significant step, even though the process is not that different from refining crude oil,” Rios added. “That is important because it means that they can use the existing infrastructure.”

The project uses solar energy to power the pumps and the rest of the facility and there is a pleasing circularity to the scheme, which tackles multiple issues, including growing food in desert environments without depleting scarce water resources and making aviation fuel renewable.

This is an imperative because, unlike road-based transport, there is no other feasible alternative to using hydrocarbons, Rios said. “There will be short-haul flights in small planes that will be battery-powered within a few years, but for long-haul the physics just doesn’t work.”

The UAE is keen to establish a leading position among the world’s major oil producers when it comes to reducing its environmental impacts. It aims to derive 50% of its energy from clean sources by 2050, to cut the carbon footprint of power generation by 70% and increase energy efficiency by 40%.

“aviation is responsible for almost 5% of greenhouse gas emissions, and it is growing fast. By 2050, if no action is taken, aviation will have consumed a quarter of the world’s carbon budget” IPCC

At the same time, the need to decarbonise the sector is urgent, particularly in the Middle East. The Intergovernmental Panel on Climate Change says that aviation is responsible for almost 5% of greenhouse gas emissions, and it is growing fast. By 2050, if no action is taken, aviation will have consumed a quarter of the world’s carbon budget. According to Airbus, air traffic in the Middle East region is set to double within a decade. Indeed, aviation is one of the key pillars of the Emirates’ economy, with the country ranking third globally in terms of revenue ton kilometres. 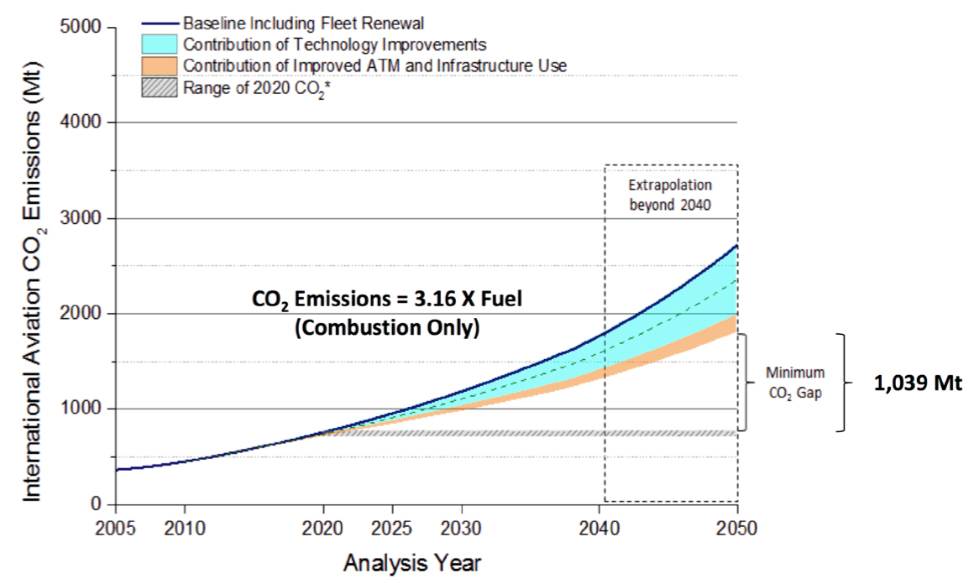 The industry has long been accused of dragging its feet on tackling its environmental impacts, but in 2016, it agreed that any growth in emissions after 2020 will need to be offset through a scheme called CORSIA (Carbon Offsetting and Reduction in Aviation). IATA, the International Air Transport Association, has a target to cut net emissions by half from 2005 levels by 2050.

But progress has been painfully slow. Although there have been around 160,000 flights using biofuels, with feedstocks ranging from crop residues to algae to municipal waste, no commercial alternative to jet fuel has yet emerged, in part because of the cost.

That is where this project could have a real advantage, because much of the revenue is projected to come from the fish farm, with the aim of producing the fuel itself at zero cost.

But we’re still a long way from seeing commercial quantities of green jet fuel on the market – the pilot project sits on 2 hectares of land near Abu Dhabi’s airport, but Rios says it will need hundreds of thousands of hectares of land to produce commercial quantities of fuel. The next step will be to create a 200-hectare demonstration plant. That is going to take a couple of years at least, and a full-size plant is at least a decade away.

If it can be scaled up, though, the potential is huge – there is no shortage of land available for such projects not just in the Middle East but also Africa and India.

“It’s not about replacing existing aviation fuel, it’s about adding value to the oil and gas infrastructure and producing sustainable aviation fuel for the future,” Rios said.