The Kingdom of Saudi Arabia has made even bigger promises of a renewable revolution before, but little has materialised. Well known as a world leading oil producer, exporter and consumer, it needs to stick to its commitments, and improve on them, if it is to play its part in emissions reductions.

In an interview with the UAE’s state news agency, WAM, Dr. Khalid bin Saleh Al Sultan, President of the King Abdullah Atomic and Renewable Energy City, announced that Saudi Arabia aims to produce 60 GW of renewable energy by 2030, including 40 GW from solar energy and 20 GW from wind and other sources. He explained that Saudi Arabia is working, under the framework of the KSA Vision 2030 and the National Transformation 2020 Programme, on building a sustainable renewable energy sector, along with the “Saudisation of technologies”. In order to find a balanced mix of fossil and alternative energy, achieve growth and prosperity, and reinforce energy security, they will integrate alternative energy into the national energy network. 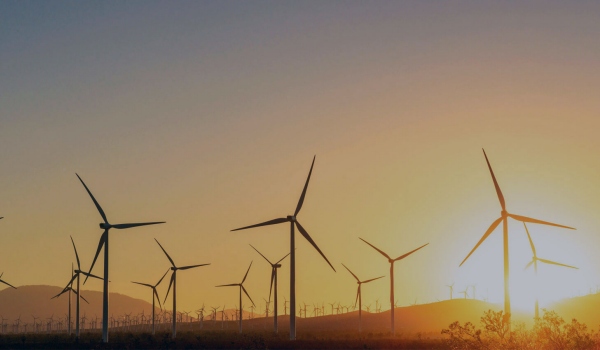 Promises have been made before. In fact, over the past six years, the Saudis have announced a number of initiatives and investments totalling more than $350bn in renewable energy. But there’s little sign of any construction that matches those ambitions. Fatih Birol, executive director of the International Energy Agency, observes of the Saudi’s intentions, “There has been a lot of stop and go.”

“There has been a lot of stop and go” – Fatih Birol, IEA

The Saudis have certainly been sending mixed signals over its commitment to reversing climate change. In 2013, the government announced its plan to build 54 GW of renewable power and 17 GW of nuclear power by 2032 to cover 40–45% of future electricity production. It then drastically revised down these targets in 2016 to an ‘initial phase’ of only 9.5 GW by 2023. And at COP24, held in Poland back in December, it was one of four countries (the others being the United States, Russia, and Kuwait) that opposed the inclusion of the Intergovernmental Panel on Climate Change’s (IPCC) Special Report on Global Warming of 1.5°C in the negotiating text.

So an announcement to increase renewables generation is a welcome move in the right direction, provided the promise holds. While we wait for more evidence of it actually happening, or another policy reversal, it’s worth looking at Saudi Arabia’s emissions performance so far. 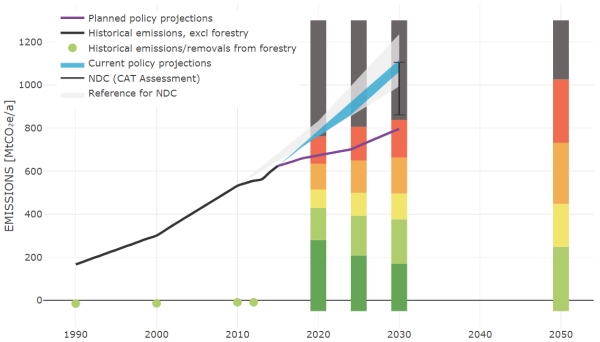 Climate Action Tracker (CAT) gives a good summary of the performance and projections for different regions and nations across the globe. Their most recent analysis for Saudi Arabia is dated 30th November 2018. It states: “under current policy projections, Saudi Arabia’s emissions [will] be at 1,061–1,117 MtCO2e by 2030—an almost six to seven-fold increase from 1990 levels.” It’s a performance worth their lowest rating possible, “critically insufficient: if all government targets were in this range, warming would exceed 4°C.”

To put the latest 60 GW promise in perspective, CAT comments on an even more ambitious announcement that was made in March 2018. Saudi Arabia and Japan’s SoftBank Groupsigned a memorandum of understanding to build a 200 GW solar plant, the largest single solar project in the world. If the MoU ever became policy and went live it could dramatically lower the emission outlook for the Kingdom. But CAT’s analysis says that if all 200 GW were fully installed, Saudi Arabia may rise above its “critically insufficient” rating, but only into the category “highly insufficient: if all government targets were in this range, warming would reach between 3°C and 4°C.” In other words, it’s not nearly enough.

Rising domestic consumption may yet force Saudi Arabia into renewables

All this is perhaps not a surprise, given the country is one of the world’s leading oil producers, and the national economy is highly dependent on it. Since 1970 oil exports have covered 90% of total government revenues, and contributed more than 35% of GDP.

It also has one of the world’s highest rates of per capita energy consumption, forecast to triple by 2030 when compared to 2010 levels. But domestic consumption itself is putting pressure on them to diversify away from oil and into renewables. As domestic consumption rises, not only do export revenues decline, government spending rises too because domestic oil use is heavily subsidised. Perhaps it is this that will see the Saudis keep their latest promise – and hopefully improve on it.