Shipping: the rise of LNG

How do we solve shipping’s “chicken-and-egg” dilemma: LNG producers wait for enough ships to run on LNG, while shipping companies wait for producers to increase their supply? The ‘virtuous circle’ of steady growth in LNG shipping in the North Sea/Baltic Sea area can provide an important case study for the rest of the world, according to a reportby the Oxford Institute for Energy Studies. It concludes that LNG will grow as a shipping fuel globally. But ship replacement rates spanning decades and the cost of new infrastructure means there will be no sudden rush.

In December, German shipbuilder Meyer Werft delivered the world’s first cruise ship to be powered solely by LNG. The AIDA nova, of AIDA Cruises, welcomed its first guests aboard in Tenerife on December 19. The 180,000 tonne ship can carry 6,600 passengers. It’s an impressive achievement for LNG ship propulsion. There is surely more to come, thanks to the new emission rules.

The emissions rules are tightening

Between 2006 and 2015, several rounds of increasingly stringent environmental targets regulating sulphur oxide (SOx) emissions were applied in the Emissions Control Areas (ECAs) of Northern Europe and North America, driven by the International Maritime Organization (IMO). The North Sea/Baltic Sea are two of four ECAs. Similar, though less stringent, IMO restrictions of SOx emissions were established at a global level in 2005 and tightened in 2012. In a highly significant development, substantially more stringent global regulations of SOx emissions will enter into force in January 2020.

On top of this, last year the IMO adopted a greenhouse gas (GHG) strategy for international shipping. Called the “Initial IMO Strategy on Reduction of GHG emissions from ships”, it plans to reduce the total annual GHG emissions by at least 50% by 2050 compared to 2008. Although burning LNG emits carbon, it is far less than traditional marine fuels, and its potential for further energy efficiencies make it an important part of the solution.

In those designated ECAs, the regulation of SOx emissions is the tightest. There are currently four ECAs, where most of the progress in emissions reduction is happening: 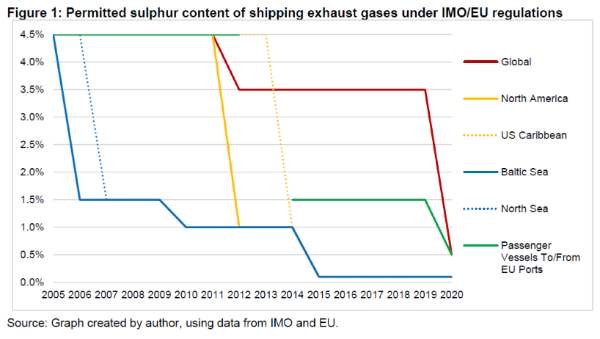 In the Baltic and North Seas the tightening regulations, as well as help from government subsidies, have incentivised the construction of the LNG infrastructure. It started with the development of truck-loading facilities in the region’s LNG terminals coincided with the development of technology enabling flexible LNG bunkering direct from trucks to ships. This avoided the necessity of investing in fixed shore-to-ship bunkering infrastructure, which was perceived as more of a commercial risk in the early stages of market development. 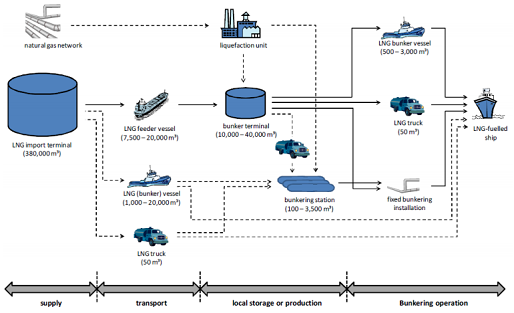 As the availability of LNG as a bunker fuel increased, some owners/operators of ships began to choose LNG propulsion for their newbuild vessels. As the market developed further, and demand for LNG as a bunker fuel grew, commercial suppliers felt confident enough to invest in bunker vessels and shore-to-ship bunkering infrastructure. Thus, a virtuous circle began to develop, as more substantial bunkering infrastructure enabled the supply of LNG bunker fuel to a greater number of larger vessels.

“The bulk LNG infrastructure is largely built. What remains is the last mile, in which the industry is showing a growing appetite to invest.” – Chairman of SEA/LNG, Chris Keller 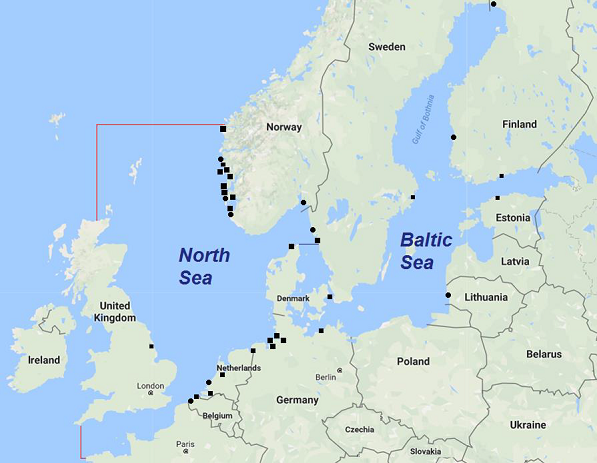 The report also shows that while LNG propulsion is proving attractive to ship owners investing in newbuild vessels that will operate in the North Sea/Baltic Sea ECAs, owners of existing vessels are still investing in scrubbers or (more often) simply switching to the more expensive low-sulphur marine gasoil. “This latter option – with lower capex and higher opex costs – is essentially a ‘wait and see’ response,” says the report.

The rules may tighten further

But shipping sector environmental regulations can change several times during the life of a vessel, given that vessels have operating lifetimes of several decades. In the North Sea/Baltic Sea region, SOx emissions were introduced and then tightened twice between 2005 and 2015. Restrictions on NOx emissions for newbuild vessels were introduced in 2000, were tightened in 2010, and are set to tighten substantially in 2021. Further tightening of the rules will force ship owners to consider how to ‘future proof’ their vessels. “Therefore, when considering existing vessels, we may expect a surge in demand for low-sulphur marine gasoil and IMO-compliant low-sulphur fuel oil blends in 2020/21, as a result of the ‘wait and see’ approach adopted by many ship owners/operators. Then, over time, this may give way to a gradual uptake of LNG propulsion as new vessels are phased into the fleet,” the report predicts.

Globally the LNG fleet is still small, but growing steadily

Of the 143, 98 are ‘dual fuel’, 29 are ‘pure LNG’, and 15 are ‘pure gas + diesel’, leaving just one with ‘dual-fuel turbine’ propulsion. Ships that cross in and out of ECAs switch between the fuel types to keep within the rules. 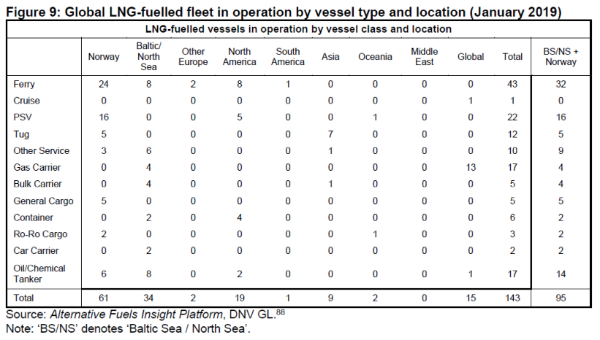 These figures show that LNG propulsion remains a minority choice. However, they reveal two important observations: the potential for growth in alternative fuels, and the scale of adaptation necessary from January 2020 to comply with the new rules.

LNG definitely has a future, according to DNV GL, the global quality assurance and risk management company. According to their report Energy Transition Outlook 2018: Maritime Forecast to 2050 their model predicts that by 2050, 23% of global shipping energy will be from LNG. 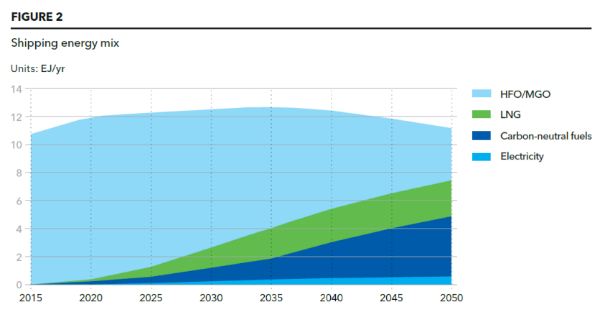 LNG is not carbon free, but can smooth the transition

The caveat remains that LNG still emits carbon, though far less than traditional marine fuels. However, when combined with improvements in energy efficiency, it provides a pathway to compliance with CO2, SOx, and NOx emission rules. Given that marine vessels usually have working lives of two or three decades, the increasingly efficient LNG-fuelled vessels launched in the 2020s may remain in service until the late 2040s, at which point technological advances in alternative fuels may render zero (or near-zero) options for carbon shipping a realistic aim by 2050.

A global LNG shipping transition will be gradual

The global tightening of restrictions on SOx emissions will provide a further policy ‘push’ worldwide. The lessons of the North Sea/Baltic Sea ECAs suggests that LNG may be attractive for newbuild vessels, particularly if the cost of LNG is substantially below that of low-marine gasoil and low-sulphur fuel oil. But it will happen only if sufficient supplies of LNG bunker fuel are available. In other words, building up even more LNG infrastructure is key.

Creating a virtuous circle of infrastructure and LNG ships takes time. So it is unlikely that the substantial tightening of IMO restrictions on SOx emissions at a global level from 2020 will trigger a huge surge in LNG supply and ship owners racing to retrofit their vessels. However, demand for LNG bunkering may grow steadily over the coming decade, as the number of ship owners choosing LNG for their newbuild vessels rises, while at the same time bunkering services become more widely available. To achieve this, marine sectors across the world will be looking at the North Sea/Baltic Sea ECAs to learn important lessons.