Is the German Energiewende running up against its limits?

Bloomberg recently produced an alarming news story showing how Germany’s “Mittelstand companies” (the industrial backbone of the country) is being “weighed down” by high electricity costs in its competition with Chinese and U.S. companies.

The companies say they have already done all they can to cut energy use, Bloomberg reports, and many fear they will have to close down if nothing happens.

Electricity costs for Germany’s industrial SME’s have doubled since 2016, notes Bloomberg. which has imposed higher electric bills to pay for cutting pollution. “While 2,000 corporate giants like Volkswagen AG and chemicals maker BASF SE have their own power plants and get exemptions from environmental tariffs, smaller companies pay more to absorb those costs.”

High electricity costs have one positive effect: they stimulate energy saving. However, according to the article, the companies have run out of ideas of how to save energy.

“We’re constantly trying to improve energy efficiency,”said Klaus Schmidtke, a spokesman for Georgsmarienhuette, which employs 1,000 people and feeds steel parts into the supply chain of Volkswagen. “But to be blunt, we’ve not been able to offset rising electricity prices.”

“Energy bills for the Mittelstand were surging even before this year’s surge in the wholesale market”, writes Bloomberg. “The companies, together with households, had to cough up hundreds of billions of euros to pay for Merkel’s transition to an economy based on mainly solar and wind. That put them at a disadvantage against competitors from China to the U.S., as well as other European nations.”

“The subsidies for solar and wind projects as well as a raft of environmental taxes aimed at cutting emissions have made German electricity prices for residential and business consumers the highest in the European Union together with Denmark.”

“The rising costs have forced Mittelstand firms, almost all of which have sales of less than 1 million euros, to splash out on expensive, energy-efficient equipment and lock in prices with suppliers for several years ahead. Some are even starting to produce their own electricity, while others have shifted production abroad in a last-ditch effort to keep up with Chinese, South Korean and U.S. competitors who pay far less for electricity.”

“The rising electricity costs threaten to undermine support for Merkel’s Energiewende just as her government is seeking to make up lost ground on the faltering path toward its 2020 emissions-reduction targets. A study of the Mittelstand by DZ Bank found a third of their company leaders thought power prices were a threat to their business.”

About a third of companies have passed rising costs on to their customers, reducing demand for Made in Germany products, according to the Leipzig-branch of the Chambers of Commerce.

“The problem is often you don’t see results that quickly,”said Wolfgang Hahn, founder of ECG-Consulting, which advises German companies on how to cut energy costs. “Firms are getting extremely nervous that they can’t save money as quickly as prices rise.”

“Germany’s lobby group for glass makers has advised members on how to save ‘every last kilowatt’ of energy. Even so, all low-hanging fruit has already been picked, said Director General Johann Overath. The industry is now producing at the limits of what is possible in terms of saving power.”

And if power prices continue to rise, many companies could be forced to close down, said Utz Tillmann, a spokesman for Energy Intensive Industries Germany, which represents the nation’s energy-intensive industries. “That would destroy the tightly-bound supply chains for German industry,”he said.

The debate around national capacity schemes is coming to a head in Brussels, our EU correspondent Sonja van Renssen wrote last week.

Now Greenpeace has weighed in on the debate. It charges that most capacity mechanisms in use in EU member states serve as hidden subsidies for coal, gas and nuclear plants.

“European governments are covertly adding almost €58 billion to energy bills in order to prop up coal, gas and nuclear plants”, says Greenpeace. According to Greenpeace, just 1% of the money involved in capacity schemes goes to renewables and demand response schemes. 66% goes to coal plants, around €38 billion.

“So-called capacity mechanisms – a type of subsidy given to coal, gas and nuclear plants supposedly to ensure supply in case extra power is needed – have almost quadrupled in the last twenty years. From 1998 to 2018, these subsidies to old, unprofitable and polluting power stations have cost consumers €32.6 billion”, Greenpeace notes.

“A number of European governments have already committed to a further €25.7 billion until 2040, with Belgium and Poland allocating the largest sums to date”. 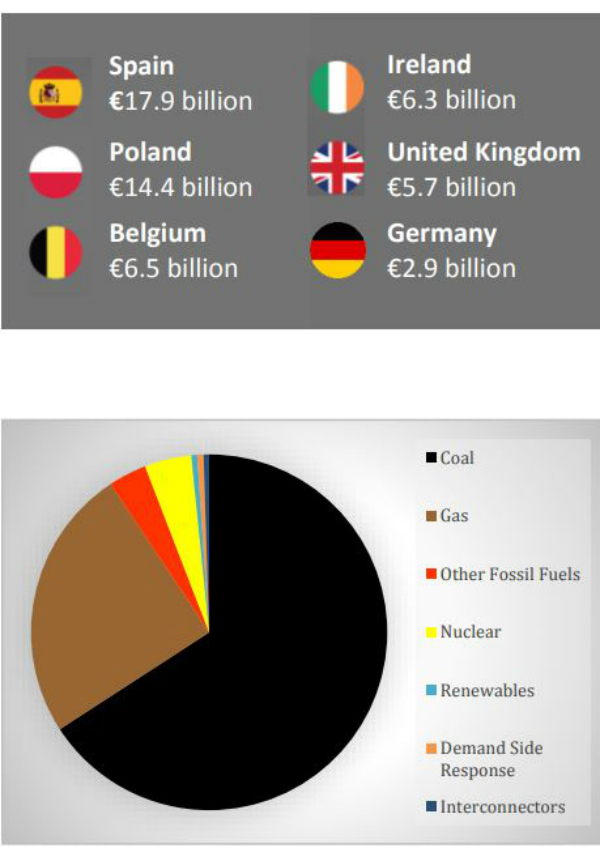 Greenpeace notes that it “gathered and analysed publicly available data on past, existing and planned capacity payments in Europe. It was possible to identify the fuel source receiving the payment in slightly less than half the cases. Of these, 98% of the subsidies goes to fossil fuels and nuclear energy: 66% goes to coal plants alone, while gas receives 25%. Nuclear gets 4%, but France and the UK which have large-scale nuclear production provide 31% and 14% to nuclear respectively.”

By contrast, “renewables, including hydro and bioenergy, receives 0.5%, and demand-side response (efficient management of energy use) and power interconnectors less than 0.5% each.”

Greenpeace EU climate and energy policy adviser Sebastian Mang said: “Big utilities are cashing in on subsidies that divert public money to keep unprofitable, polluting plants alive. Bankrolling dirty energy heats up the planet, contaminates the environment and endangers lives. Propping up coal, gas and nuclear is also slowing down the transition towards 100% renewable energy, which is crucial to avert the climate chaos Europeans are beginning to experience in their everyday lives. European governments must end this dirty practice.”

This autumn, national governments and the European Parliament will decide whether or not capacity mechanisms will be restricted by EU law. The Commission proposal for the Electricity Market Regulation and Directive, supported by the European Parliament, would require governments to prove that there is a security-of-supply issue before power utilities are granted subsidies. Under this proposal, only the plants emitting less than 550g CO2/kWh would be allowed to access capacity mechanisms after the assessment demonstrates a need.

National governments rejected this proposal during an energy Council meeting on 18 December 2017. Large utilities have also rejected the proposal.

According to Greenpeace, capacity mechanisms are actually “unnecessary because the capacity in Europe to produce energy significantly outweighs demand…. Europe’s overcapacity is expected to continue for a long time. Because fossil fuels and nuclear energy are propped up by capacity mechanisms, their price is kept artificially low. This penalises renewable energy and distorts the market.” 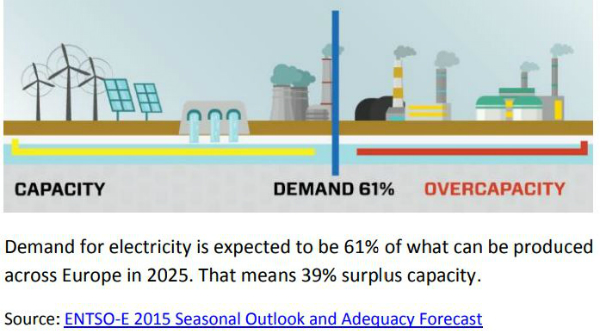 For more on the Spanish capacity market schemes, see this article on Energy Post by Gerard Wynn.