With the Chinese state increasingly confident of its renewable energy technologies and manufacturing, European firms are finding conditions right to invest in the sector there. Joe Mitton looks at the conditions for investors, and why EU-Chinese energy partnerships must not be caught up in the US trade war. Energy Post’s Matthew James spoke to Sebastian Meyer, Vice President at EDF Renewables, about his experiences.

A new law for the renewable energy superpower

We previously looked at the large scale of Chinese investment in European energy sectors. But the EU has long been seeking reciprocity of conditions for Europeans investing in China. The recent launch of the EU-China Energy Cooperation Platform sent an important signal that China wants to work with Europe, and is willing to give and take, including on investment conditions. Put simply, the deal is for the EU to help China meet its energy goals, in exchange for greater access for EU firms. Several energy executives told Energy Post the platform represents a genuine, meaningful step forward by both parties.

This comes after China passed a new Foreign Investment Law, which will come into effect on 1 January 2020. The law applies to both wholly foreign-owned enterprises and Sino-foreign joint ventures, and seeks to allay concerns about unfair restrictions and forced technology transfers. It will “build a market environment of stability, transparency, predictability, and fair competition”, said the government. The law has been welcomed as a positive move for investors, through some have called for greater clarity on its detail. The CEO of Engie China, Charlotte Roule, told Energy Post she welcomed the law, though the wording was “very general” and she was looking forward to more practical details about its implementation.

China is increasingly confident in its home-grown renewable energy technology. A report for the International Renewable Energy Agency (IRENA) said China is best placed to be “the world’s renewable energy superpower”, with one-third of the world’s wind power, a quarter of its solar capacity, six of the top ten solar-panel manufacturers and four of the top ten wind-turbine makers. (Still, it is worth noting that fossil fuels also remain big in China – it is the largest consumer of coal and second only to the US in oil consumption). 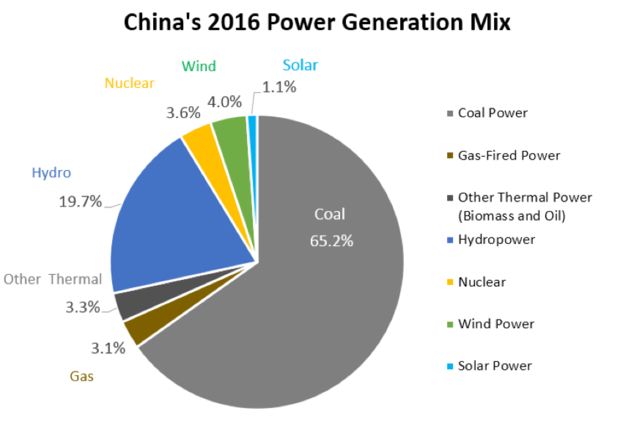 Foreign companies are pouring more money into renewables, relative to the size of the sector. This may be especially true for European investors. While some reports suggest 80 percent of foreign investment in Chinese energy is in the fossil fuel sector, even the remaining 20 percent going to renewables is still disproportionately large, relative to the size of the renewable sector in China. According to The Economist’s special report on Chinese renewables, China sourced 12 percent of its electricity from renewables in 2018. China says it is on track to meet its target of 15 percent renewable energy by next year.

European firms continue to have some concerns about forced technology transfers. We spoke to the Vice-President of the European Chamber of Commerce in China, Charlotte Roule, about the issue (in a separate role, Ms Roule is CEO of Engie China as noted above). She pointed to the Chamber’s latest Business Confidence Survey (2019), which showed that 20 percent of respondents felt compelled to transfer technology to Chinese entities or partners in 2018, compared to 10 percent the previous year. Nevertheless, the survey shows that a majority consider Chinese companies at least as innovative, or more so, than European firms. The vast majority of European enterprises – 81 percent- surveyed saw opportunity for themselves in domestic Chinese innovation.

China Dialogue, an independent organisation monitoring environmental issues in China, charts the rise, and fall, and rise again of foreign investment in Chinese energy. It says that by 1997 there were at least 40 foreign firms active in China’s energy sectors, owning 10 percent of electricity output, mostly in coal. Companies exited the Chinese market in the early 2000s when price-setting, over-supply and unfair treatment became a problem, but China Dialogue now reports that investment is back in solar, wind, hydro and battery storage, with companies like Engie and Total establishing a presence. The think-tank warns investors that some problems remain, however, saying “the power dispatch process remains opaque, with no data being released on a plant-by-plant basis even when existing investors ask for it”.

EDF Renewables is another EU firm active in China. Talking to Energy Post’s Matthew James at the EU-China Cooperation launch in Beijing, EDF’s Vice President of Strategy and Power Markets, Sebastian Myer, said, “the innovation that has come from China is amazing”. He spoke about a clean energy consultancy he set up in 2004: “My partners were American citizens from top universities committed to the renewables dream, who couldn’t follow that in the US. We’re here because China was open to it when the US was focussed on gas and oil”. Myer said EDF Renewables is the “only owner of large-scale wind projects that are owned 100 percent” by a foreign firm. A much more common model is a joint-venture with local Chinese partners; something the government used to insist on.

EDF’s Chinese wind and solar projects are aimed at serving corporate needs for renewables rather than serving the grid. Supplying the grid brings challenges. Myer said that instead of investing in storage, curtailment is a more common way to address over-capacity in China. “There is a shift in some provinces […] towards an economic curtailment. That is a concerning development. It’s creeping in under the auspices of market liberalisation. It is problematic vis-à-vis renewables integration and grid reform”. It is understandable for companies like EDF to point out problems in the market, but the scale of investments shows that many firms reckon it is still a market worth entering.

Febrile atmosphere for a trade war

Complicating the mostly positive picture, the current US administration has raised tensions with China over trade. Earlier this year the US introduced additional tariffs on imported solar panels, most of which come from China. It is not the first time; the Obama government also added such tariffs in 2014, and the European Commission launched anti-dumping and anti-subsidy investigations into Chinese solar-panel imports, before reaching an agreement with China in 2013. While the trade disputes do not seem to have affected investments, it is nevertheless a concern for investors seeking strong export markets and regulatory certainty. The EU will need to show diplomatic dexterity to avoid European interests in China getting caught in the American dispute.

A cause of optimism, however, is President Xi’s interest in soft power, which makes his government keen to protect its reputation as a renewable energy champion. Soft power means essentially promoting a more positive view of a country internationally as a diplomatic tool. The US Council for Foreign Relations says China may be spending US$10 billion a year on foreign aid, positive media coverage, Chinese cultural and language institutes and so forth, to improve its image. Xi has called for a stronger national effort to link China’s popularity to its meteoric rise.

China’s reputation has problems for several well-founded reasons, but on renewable energy the narrative is fast emerging that China is increasingly progressive. There is real substance to this narrative. China showed global leadership during the Paris Agreement (COP21) negotiations, helping to break the cycle of blame for CO2s between developed and developing nations. China will want to preserve this reputation and not hurt the renewables sector, both for economic and strategic diplomatic reasons. And this should give investors some cause for optimism.