Two weeks ago, Energy Post reported on permitting and legal barriers to the development of onshore wind capacity in Germany. In this follow-up analysis, Mike Scott identifies similar obstacles in key regions as well as some clear success stories. To complete the picture, he spoke with WindEurope and Vattenvall to get their views on the way forward for the industry and investors across the EU. 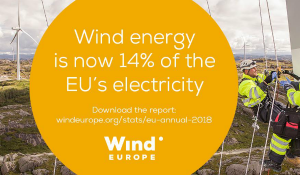 Wind is now a major player in European energy markets, 14% of all EU power comes from wind according to latest figures. But it is being held back by difficulties in getting projects approved and legal wrangles. The industry wants a convergence of permitting practices, the ability to make use of the latest (i.e. biggest) technology and more consistent application of the rules.

Europe installed 11.7GW of gross wind power capacity in 2018, almost a third less (32%) than the previous year, according to figures released this week by industry body WindEurope.

In 12 European Union countries, not a single turbine was installed, while growth in the onshore sector in Germany more than halved, while demand “collapsed in the UK”. In fact, the body’s CEO Giles Dickson said, 2018 was “the worst year for new wind energy installations since 2011”.

While much of the decrease is due to the vagaries of the project cycle and changes to state aid rules, the market is still hampered by policy and permitting barriers in a number of markets, said WindEurope sustainability analyst Mihaela Dragan. These include:

These issues are having a knock-on effect on the market – Germany’s last three onshore auctions have been undersubscribed.

“It’s clear the permitting process is not fit for purpose. It’s taking longer and longer to get a permit. And even if wind farms do get a permit, many then get caught up in legal disputes, which is pushing up costs. The German government needs to take urgent action to make permitting easier. And the Bundesländer need to identify appropriate new zones for onshore wind. If they don’t, auctions will continue to be under-subscribed, and prices will remain higher than they should be. And this will jeopardise Germany’s target of 65% renewables in electricity by 2030,” said Dickson.

Permitting can be a challenging and expensive process, agreed Tobias Nylander, head of the onshore wind development team at Vattenfall. “In several European countries permitting is becoming increasingly difficult and we see many examples where the permit process puts national renewable targets at risk.”

Tip height rules reduce opportunities for innovation, he added. “To enable growth in renewables as cost efficiently as possible, permits need to be given for projects with attractive fundamentals, such as high wind speeds and the ability to build modern technology with high total heights.”

Each market has its own permitting system, “which we think is needed to reflect local need, culture and priorities,” said Nylander. “However, there is good practice in different markets (e.g. in regard to process and flexibility in permits) and if adopted would lead to a degree of convergence across the EU which would promote certainty and confidence among investors and enable a successful build-out of renewables.”

It is not all bad news – in Poland, for example, the tip height rule will be waived if the local community is in favour of the development, according to the Polish Wind Energy Association, while in France, the defence ministry has released a number of flight training zones so wind farms can be sited there.

“The vision of the wind industry for the next few years is optimistic,…installation forecasts for wind power are approximately 2000MW a year.” AEE president Rocio Sicre

The French government has also reformed its appeals process, removing entirely one of the three stages of the process in a move that could reduce the time taken for an appeal by a year and a half.

And, after years in the doldrums, the Spanish market has roared back into life with the recent announcement by trade body Asociacion Empresarial Eolica (AEE) that 4.6GW of capacity will be installed by 2020.

“The vision of the wind industry for the next few years is optimistic,” AEE president Rocio Sicre said. “Installation forecasts for wind power are approximately 2000MW a year.”

It’s important not to lose sight of the fact that wind energy provided 14% of the EU’s electricity last year, up from 12% in 2017, according to WindEurope. And with a total installed capacity of 178.8 GW in the EU, it remains the second largest form of power generation capacity in the EU-28, and it is likely to overtake natural gas in 2019. A record number of projects were financed with 16.7GW of projects reaching Final Investment Decision, 4.2GW in offshore and 12.5GW onshore, with a total value of €26.7bn, a 20% increase on the year before, according to WindEurope.

Another plus is new EU legislation that will make it easier to repower projects where turbines are coming to the end of their lives.

This could have a significant impact on the market as the first wind farms reach the end of their 15-20-year lifespan. WindEurope says that the repowering market, which was worth 1GW-2GW in 2017, could rise to between 5.5GW and 8.5GW by 2027.