California goes low-carb – but who is following?

On 28 August, the California Assembly passed a bill requiring 100% of the state’s electricity to come from carbon-free sources by the end of 2045.

This is not small beer! California is the fifth economy of the world. Given the size of California’s economy and the bill’s ambitions, it “would be the most important climate law in US history,” said Danny Cullenward, an energy economist and lawyer at the Carnegie Institution for Science.

Severin Borenstein, an energy economist at the University of California, Berkeley, said: “California is effectively acting as a test bed for what’s technically achievable, providing a massive market for the rollout of clean-energy technologies and building a body of knowledge that other states and nations can leverage”, according to a report in MIT Technology Review. “We are showing that you can operate a grid with high levels of intermittent renewables. That’s something that can be exported to the rest of the world.”

Analysts believe California could reach 50% carbon-free electricity already in 2020, after strong growth of solar and wind in the last few years: 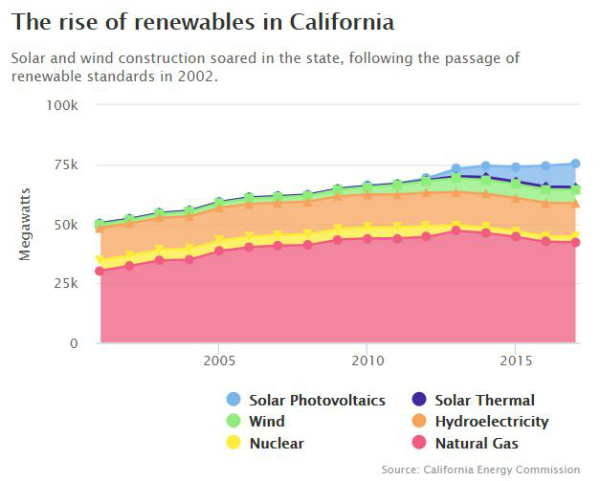 Renewables progress in California has led to high rates for consumers, Borenstein admits, but he adds that “crucially, the rapid transformation occurred without wrecking California’s flourishing economy. The state’s gross domestic product climbed by $127 billion last year, making it the world’s fifth-largest economy.”

The critical question now is: “Can the state’s grid get to 100 percent clean energy as affordably and reliably?”

“Many energy researchers believe the second half of California’s clean-energy puzzle will be considerably more difficult, and expensive, to solve than the first”, notes MIT. “Back in 2002, California got off the starting block with a fair amount of existing wind, geothermal, hydroelectric, biomass, and solar thermal power. From this point forward, every additional percentage point of clean power needs to be built from scratch. In addition, the state plans to close its last nuclear plant in the coming years, eliminating a carbon-free source that provides about 10 percent of the state’s electricity.”

And then there is the intermittency challenge. “As renewables come to represent a larger portion of the state’s total electricity generation, managing that intermittency could become increasingly costly and complex. ‘The amount of effort to achieve the last 20 percent might well be as much as it took the reach the first 80,’ Jane Long, a former associate director at Lawrence Livermore National Laboratory and energy researcher who has closely studied the mix of technologies that could be required to meet California’s emissions goals, said in an email.”

“Among other things, it could require expensive investments in energy storage, politically tricky expansions of transmission infrastructure, or greater reliance on controversial carbon-free sources like advanced nuclear, or fossil-fuel plants coupled with carbon-capture.”

Some are more optimistic, notes the article. “Daniel Kammen, director of the Renewable and Appropriate Energy Laboratory at the University of California, Berkeley, argues that it won’t be increasingly challenging to reach California’s next set of goals. Among other things, he believes we’re sure to see the necessary energy storage advances in the years to come and says the state has yet to harvest other low-hanging fruit, like using electric vehicles as a form of distributed storage.”

“Moreover, Kammen says we’ll see a pronounced shift toward the ‘low-carbon lifestyles’ embraced by younger citizens in the next few decades, as the state increasingly plans cities around dense housing and public transit rather than single-family homes and cars.”

Californians may be going for a “low-carbon lifestyle”, and they may be thinking they are setting the example for the rest of the world, but who is following?

The Atlantic journal spots a trend in the opposite direction, in a recent article by Robinson Meyer entitled “The global rightward shift on climate change”.

Meyer spots an “emerging pattern” in the world: “Moderate national leaders—on both the center-left and center-right—in some of the world’s richest and most advanced countries are finding it far easier to talk about climate change than to actually fight it.”

“At a basic level, this pattern holds up, well, everywhere”, notes Meyer. “Every country except the United States supports the Paris Agreement on climate change. But no major developed country is on track to meet its Paris climate goals, according to the Climate Action Tracker, an independent analysis produced by three European research organizations. Even Germany, Japan, and the United Kingdom—where right-wing governments have made combatting climate change a national priority—seem likely to miss their goals.”

He mentions the Australian political crisis as just the most recent example.

Canada is another country that has a problem keeping up its climate commitments – partly as a result of the influence of the U.S.: “After winning the election, Trudeau took a compromise strategy on fossil fuels, proposing an economy-wide carbon price while endorsing the construction of several massive new oil-export pipelines. Two years later, Trudeau’s carbon-pricing scheme is in trouble. The government has already slashed the ambition of its initial proposal. The Conservative Party, which opposes Trudeau, has dubbed the carbon price a “tax on everything” and its leader says a future government would repeal any carbon price. The new premier of Ontario, Canada’s most populous province, says he will fight the carbon price when it takes effect in January of next year.”

Meyer could also have mentioned France, where Nicolas Hulot, minister for ecological transition, last week threw in the towel, saying he did not believe anymore in the Macron government’s climate ambitions. Hulot, a famous green activist in France, apparently quit also over disagreement in nuclear policy. He said France is continuing with “nuclear, that useless craziness, [both[ economically and technically”.

And he could have mentioned Russia, but that is less of a surprise. Reuters reports that president Putin has urged Russian energy companies to expand their export infrastructure and boost exports of energy, including coal.

Speaking at a meeting with government officials and top managers of energy companies, Putin also said rivalry on global energy markets has heated up, notes Reuters.

“The current business environment allows for Russia to expand its exposure to the global coal market, to strengthen its position and raise its market share,” Putin said at a meeting in Siberian city of Kemerovo, one of Russia’s coal mining centres.

Russia is the world’s third largest coal exporter and is seeking to double coal exports to Asia by 2025.

Putin did add that “the Russian coal industry should take care not to harm the environment when expanding.”

Of course it’s easy to blame Putin, but he is only following the example set by the U.S. of course, which last year boosted coal exports by 61% to 97 million tons.

Apparently, the idea that climate action could deliver economic benefits, as the Global Commission on the Economy and Climate claims in a new report (to be published on 5 September), has not yet convinced political leaders. Or perhaps they find it too politically risky to go against the short-term interests of the people, because the Global Commission does call on them to “ramp up efforts on carbon pricing” and “accelerate investment in sustainable infrastructure”.

I have to admit that I do have some sympathy for world leaders here. I find the conclusion reached by the Global Commission (“set up by Colombia, Ethiopia, Indonesia, Norway, South Korea, Sweden and the United Kingdom – as an independent initiative to report to the international community”), that “bold climate action could deliver $26 trillion to 2030”, a little bit too convenient.

Who is ever going to be able to check on a figure like that? Why even pretend that you can put such an exact figure on “climate benefits”? And why does no Commission – whether for or against climate action – ever seem to come out with research that reaches conclusions running counter to their own beliefs?

Nevertheless, it does seem clear that for the moment the world can’t count on national leaders to take decisive climate action.

Not all may be lost, though. Local and private initiatives may come the rescue.

Yet another new report, this one from Data-Driven Yale, NewClimate Institute, PBL Netherlands Environmental Assessment Agency, and the Carbon Disclosure Project, finds that “action by cities, states, regions and business can go a long way towards meeting the goals of the Paris Climate Agreement, but their actions alone are not enough to hold global temperature increase to well-below 2°C and work towards limiting it to 1.5° C.”

In a press release the institutes describe their report as “the most comprehensive assessment to date of city, region, and company commitments to reduce greenhouse gases.”

Key findings from the report include:

The analysis only includes recorded, quantified commitments, so the true figure could come out higher – but it could also be lower, if the commitments aren’t kept.

With regard to climate action by business, Facebook is the latest prominent company to promise to be 100% powered by renewables, already by 2020.

Among financial investors the fossil fuel divestment movement has been growing stronger. Some are skeptical about the potential of divestment to affect the activities of fossil fuel companies, but according to the Institute for Energy Economics & Financial Analysis (IEEFA) divestment works.

In a 10-point “primer” it attempts to answer some basic questions and expose some myths about divestment. Perhaps the best argument for divestment is that, as IEEFA notes, “the fossil fuel industry doesn’t lead the market liked it used to. It lags. Energy was the worst performing sector in the S&P 500 Index last year, and its cumulative returns over the past five years have been abysmal. The chart below shows the trend. Fossil fuel investments’ volatile revenues, limited growth, and a negative outlook as the quality of its equities continues to deteriorate from the quintessential blue chip component of investment portfolios to one that is speculative and tied to the oil-price uncertainty.” 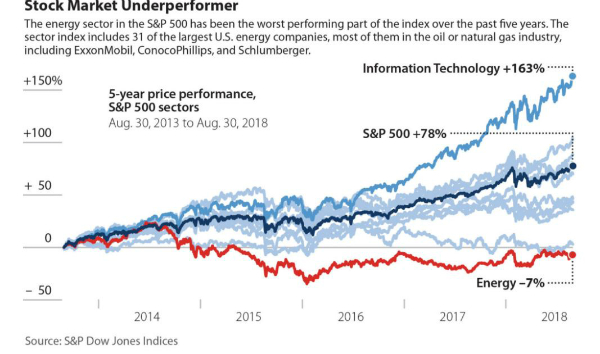 That should convince some investors.

However, don’t get your hopes up too soon. The Financial Times reports that UK local government pension funds have invested £9bn in fracking companies in the UK, “despite fierce debate over shale gas exploration. One third of the British public said they were opposed to fracking in a poll last year, compared to 16% in favour. The council of Lancashire, a region that is a “hotbed” of anti-fracking protests, is among the authorities with a portion of their pension fund exposed to fracking.”