Nike enters the race for renewables investment as governments step back

Costs of developing clean energy capacity are falling and the industry is moving from being supported mainly by state subsidies to a more commercial footing where projects are supported by corporate backing, with EU, national or regional targets providing a foundation for the market.

The US sportswear giant Nike has signed its first power purchase agreement (PPA) for renewable power in Europe, committing to buy 40MW of wind power from a 111MW Iberdrola project in Navarra in Spain.

The deal shows how corporate demand for clean energy and state and regional decarbonisation targets are coming together to drive the market for renewables. Nike’s move is driven by its membership of RE100, the campaign to get companies to go completely renewable and follows its switch to 100% renewable electricity in the US a year ago.

Navarra, meanwhile, is a member of the Under2 Coalition, a group of state and regional governments that have introduced climate targets both to cut emissions and to boost their economies. Some 81.1% of the region’s electricity demand is currently covered by renewables, and it has established itself as a European leader in wind power innovation. Encouraging private investment in renewables is part of Navarra’s roadmap for growing the industry further.

It has recently seen the construction of the world’s tallest onshore steel turbine tower, a “self-erecting” prototype that uses hydraulic jacks rather than cranes. Developer Nabrawind says the system could cut the costs of installing turbines on land by 20%.

The Navarra PPA means that three quarters of the company’s global power supplies are renewable and shows how commitments made in one market are percolating through to the rest of the world.

Mike Peirce, Corporate Partnerships Director at The Climate Group, said: “We’re thrilled about Nike’s news – this is a powerful illustration of how RE100 members are investing at scale and accelerating the global shift to clean energy.

“By committing to source electricity from a new wind project in Spain, Nike is growing its own renewables portfolio as well as supporting construction of new projects to power local homes and communities – generating benefits on all sides.” 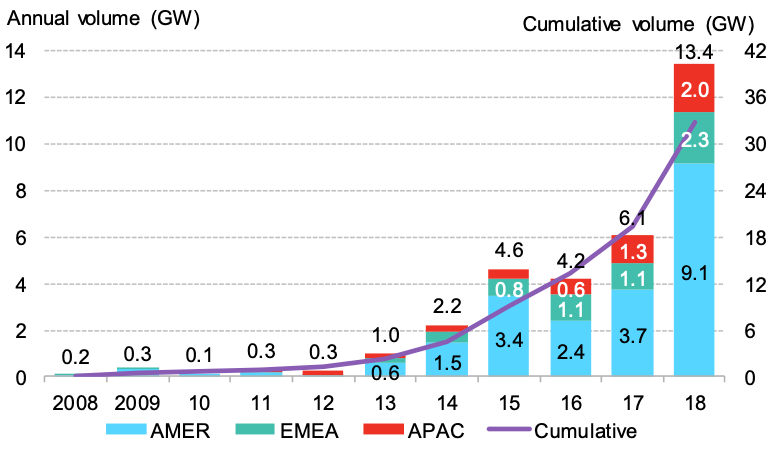 Corporate PPAs are now a major part of the market, as Bloomberg New Energy Finance (BNEF) highlighted recently. Companies signed contracts for 13.4GW of renewable capacity in 2018, more than double 2017’s 6.1GW, putting them alongside utilities as the biggest buyers of clean energy globally. The market is growing at a tremendous rate, said Jonas Rooze, head of corporate sustainability for BNEF. “Corporations have signed contracts to purchase over 32GW of clean power since 2008, an amount comparable to the generation capacity of the Netherlands, with 86% of this activity coming since 2015 and more than 40% in 2018 alone.”

While most of the contracts were in the US, PPAs in Europe doubled too, from 1.1GW to 2.3GW. The US has dominated sales because the corporate PPA sector was pioneered by large tech groups such as Facebook, Amazon, Apple, Netflix and Google. These companies are very keen to present themselves as sustainable, but they use far more energy than is commonly realised, to power energy-hungry data centres. Facebook alone accounted for more than a quarter of the US market, buying more than 2.6GW of capacity globally.

But the market is starting to broaden as other sectors get involved, and smaller companies that were previously locked out of the market join forces to buy clean power. ExxonMobil became the first oil major to sign a renewables deal, while sectors from retail to

Bloomberg itself teamed up with Cox Enterprises, Gap, Salesforce and Workday to form the Corporate Renewable Energy Aggregation Group, the first example of companies combining their relatively small energy demand to enable them to act as the anchor tenant for a large offsite renewable energy project. The move “lays the groundwork for other corporates to procure renewable energy co-operatively, maximizing value and reducing risk,” the group says.

“Historically, a lack of transparency, high costs and little flexibility meant only a select group of Fortune 500 buyers with immense resources could participate in this type of transaction. Kudos to these buyers for their vision and commitment toward not only impacting their own carbon goals, but also toward paving the way for many others,” said Bryce Smith, Chief Executive Officer of LevelTen Energy, which helped with the transaction.

There is a feeling that the European market is just taking off – companies signed PPAs for the first time in Poland, and just the second time in Denmark and Finland, BNEF pointed out, with new deals signed in the UK, following a lull after the expiration of a national subsidy programme. “Several requests for proposals and changes in policy suggest burgeoning new markets in Germany and France as well,” BNEF added. Denmark and Finland saw their second-ever deals.

Most of the PPAs in Europe in 2018 were for wind energy. The Nordic region led the way, thanks to strong wind resources and credit support from government bodies. Aluminium producers Norsk Hydro and Alcoa were the biggest clean energy buyers in Europe in 2018, while the tech giants Facebook, Amazon and Google were also significant buyers.

Industry body WindEurope said that 1.5GW of new wind PPA deals were signed, and that interest is spreading to other sectors, with Mercedes-Benz striking the first wind PPAs in the auto sector last year to power its electric vehicle and battery manufacturing operations in Poland and Germany, while pharma, chemicals and steel companies also signed deals.

Corporate demand for renewables is predicted to continue to be strong, thanks to the continuing fall in the price of renewable energy, the rise of decentralised energy and smart grids and, most importantly, the growth of initiatives such as RE100 and the Science Based Targets Initiative.

BNEF calculates that RE100 signatories bought an estimated 189TWh of electricity in 2017, equivalent to Egypt’s electricity consumption. The research group estimates that they will need to buy an additional 190TWh of clean electricity in 2030 to meet their RE100 targets. Should this shortfall be met with offsite solar and wind PPAs, it would catalyse an estimated 102GW of new solar and wind build globally, greater than the size of the UK’s power generation fleet in 2017.

“These initiatives have created an entire new universe of opportunity for utilities, clean energy developers and investors,” said Rooze.

Sources: BloombergNEF, Bloomberg Terminal, The Climate Group, company sustainability reports. Note: Charts are for RE100 members that have disclosed electricity demand. Certificate purchases includes non-U.S. green tariff programs, and are assumed to step down 10% each year. Onsite generation and contracted wind and solar purchases are assumed to remain flat through 2030. Regional breakdown of shortfall estimated based on each company’s share of revenue by region.