Some of the world’s largest natural gas reserves have been discovered off Cyprus. One of the questions being addressed at this year’s CERA Week is, could these massive finds (totalling more than 70 trillion cubic feet!) be the answer to any perceived over-dependency on Russian gas imports to the EU? Maybe, maybe not. Geopolitical tussles could scupper the realization of these much-needed resources for Europe. Whilst the potential is there, it may be a case of  “keeping calm and carrying on importing from Russia” for the time-being. Gaurav Sharma reports from Houston…

On the surface there is little to dislike about mammoth natural gas finds in the Eastern Mediterranean. The expected bonanza is largely underpinned by Glaucus, Aphrodite and Calypso gas finds in Cyprus, Israel’s Leviathan field, and Egypt’s Zohr field.

The three Cypriot finds could well tally up to 15-20 trillion cubic feet (tcf) even by the most conservative of estimates. Leviathan could yield the first proceeds of its expected 22 tcf potential in November and Egypt’s 30 tcf Zohr field is already onstream. On paper, it is a bonanza Europe could well do with. More so, as diversifying away from Russian natural gas imports seems to be a hot topic in European capitals these days. 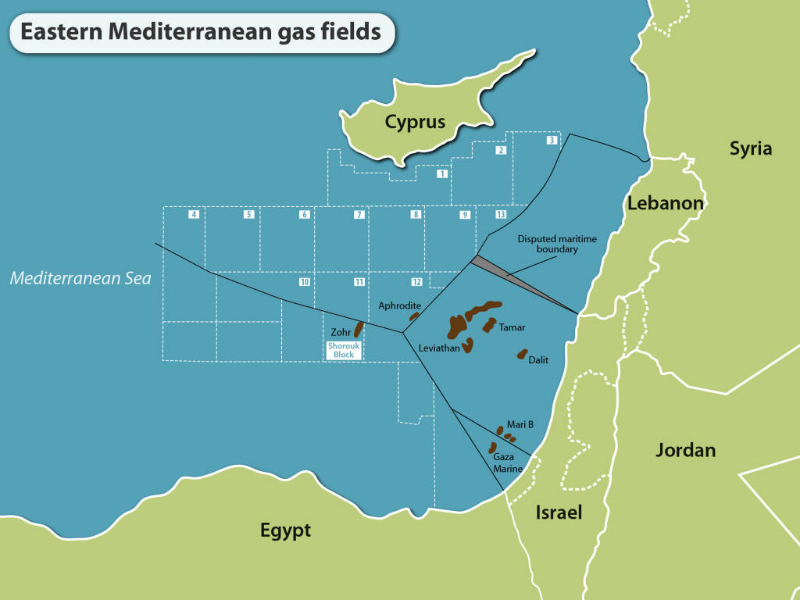 But instead of an imminent bonanza, expect lengthy bottlenecks coloured by Cypriot disunity that has existed since the island was split into the internationally recognized Republic of Cyprus, a member of the European Union, and Northern Cyprus, following the Turkish invasion of 1974.

Unsurprisingly, Turkey wants in on the act and does not recognize Cyprus’ economic exclusion zones (EEZ). The country’s President, Recep Tayip Erdogan, has warned international oil and gas companies against any hydrocarbon exploration in Cyprus, labelling them “pirates” and “bandits”.

And last October, Erdogan sent Turkey’s own drilling ship to hunt for oil and gas in the Eastern Mediterranean off Northern Cyprus, much to the chagrin of Cyprus and Greece over jurisdiction matters. Among those labelled as bandits by the Erdogan is ExxonMobil, which has a 60% stake in Glaucus’ Block 10. Qatar Petroleum, the state-owned firm of Qatar, deemed an Erdogan ally, holds the rest.

It is by no means the only tension linked to regional maritime borders and EEZs. Lebanon is staking a claim to waters Israel is drilling in. Given its growing clout in the region, Russia wants in on the Eastern Mediterranean tussle as well.

In February, Moscow’s state-owned giant Rosneft inked a 20-year agreement to manage and upgrade an oil storage facility in Lebanon’s second city of Tripoli. Financials of the deal were not made public. Tripoli is around 30km from the Syrian border when Russia is backing the regime of Bashar Al-Assad, and less than 60km from the Russian-controlled port of Tartus, deemed Moscow’s only maritime Mediterranean hub.

In 2018, Russian gas producer Novatek bagged a 20% stake in two offshore hydrocarbon exploration blocks in Lebanese waters. Further blocks will be auctioned in 2019 and few would discount incremental Russian involvement, with Israel reportedly unhappy about the move.

Nonetheless, the main protagonists attempted to put as positive a spin as possible on the “Eastern Mediterranean renaissance” at the recently concluded IHS Markit’s CERA Week 2019 conference; a week-long energy sector jamboree held in Houston, US every year in March.

Yiorgos Lakkotrypis, Minister of Energy, Commerce and Industry, Republic of Cyprus, hailed ExxonMobil’s Glaucus Block-10 find as the “biggest so far in Cyprus.”

“Based on some official data it is also one of the biggest finds worldwide in the past two years, and will have a transformative impact on European energy security,” he added.

George Stathakis, Minister of Environment and Energy, Greece, talked of opening up a natural gas corridor “through to Europe” supported by potential Cypriot and Israeli supplies; i.e. the Eastern Mediterranean Pipeline. “Opening up of the Balkans is to be naturally expected, via a vertical corridor between Greece and Bulgaria with an extension to Serbia.”

Stathakis omitted to mention that the move – first revealed in March 2017 – alongside the Trans Adriatic Pipeline plans, is projected to cost €5.8 billion, a figure most analysts deem as too low an estimation of project costs.

Continuing the feel good chatter, Yuval Steinitz, Minister of Energy, Israel, hailed his country’s pooling of resources with Cyprus as the beginning of wider regional cooperation with “natural gas fast becoming the fuel of the future.”

Playing his part in the CERAWeek bonhomie, Tarek El Molla, Minister of Petroleum and Mineral Resources of Egypt said, “Fruits of the Egypt-Israel peace treaty are being felt 40 years later in the shape of the Eastern Mediterranean Gas Forum.”

With Steinitz adding: “It would be great for Israel and the region if our gas can be exported to Europe via Egypt.”

Some even cooed how natural gas finds could serve as a catalyst for bringing about Cypriot reunification. But a response by the Turkish Energy Ministry highlights the complexity of the situation.

When asked about its stance on the developments, a spokesperson said: “We don’t have an eye on others’ resources, but President [Recep Tayip] Erdogan has been clear we will not allow other countries to drill for gas in Turkish or northern Cyprus waters in the Eastern Mediterranean.”

Most expect Turkey to dig deep, therefore talk of European markets relying on a potential Eastern Mediterranean gas bonanza are premature at best.

Laurent Ruseckas, Senior Advisor, Eurasian Gas at IHS Markit, says “In a lower risk scenario, geopolitical problems could stunt the pace of development, but in a worst case scenario could stop viable natural gas offshore prospects from being developed altogether.

“Turkey-Cyprus dispute has been rumbling for what is now approaching five decades, and the gas finds add another dimension. No one knows how that is going to be resolved before we start making projections on how Europe could or couldn’t benefit from it. Commercialization will not be straightforward.”

ExxonMobil, whose recent find off Cyprus brought renewed focus on the region, declined comment on political ramifications. However, the company’s Vice President of Exploration for Europe, Russia and the Caspian, Tristan Aspray, says he remains “positive” on the Glaucus find, the data from which had been sent for further analysis.

Sidestepping salvos between Turkey and Cyprus over Glaucus, the latter’s Aphrodite and Calypso prospects are far from being the done deal too. Calypso – where exploration is being fronted by Total and Eni – is in nascent stages.

Aphrodite, first discovered in 2011, is facing delays as its stakeholders Noble Energy, Delek and Royal Dutch Shell are renegotiating their production sharing agreement with the government. The concept of how to get the natural gas to market has also not been finalised, with some Cypriot policymakers torn on whether or not to send the gas to Egypt for liquefaction and export via LNG tankers.

Industry consultants Wood Mackenzie describe the Eastern Mediterranean as one of the world’s “premier exploration hotspots” with massive potential for Europe. Be that as it may, the realization of that potential is some way away; and may need refereeing by Brussels. Perhaps keeping calm, and carrying on importing from Russia looks to be about par over the short term.