Want a UK nuclear power station? Not if you paid me

Toshiba has announced its withdrawal from the planned Moorside nuclear power project near Sellafield, UK. Toshiba has not been able to find a buyer for its NuGen subsidiary so will instead liquidate it. Massive government subsidies would be available to any company prepared to pursue the Moorside project, which makes the lack of interest in NuGen all the more significant.

“As our Pathways to 2050 study shows, nuclear can contribute to an ambitious decarbonisation of the European economy” European Commission 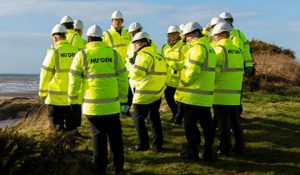 On the other hand, the European Commission says that nuclear remains part of the solution to a carbon-free European power system, together with renewables. FORATOM, the Brussels-based trade association for the nuclear energy industry in Europe, agrees. “As our Pathways to 2050 study shows, nuclear can contribute to an ambitious decarbonisation of the European economy. By taking a step in the right direction, the Commission has demonstrated a real commitment to reducing CO2 emissions across Europe” says Yves Desbazeille, Director General of FORATOM.