The Carbon Tracker Initiative – the UK-based think tank which popularized the terms “carbon bubble” and “stranded assets” – reports that “The EU carbon market has been the hottest commodity market in the world over the last 16 months, with the price of European carbon allowances (EUAs) up 310% since May 2017, 120% since the start of the year.” 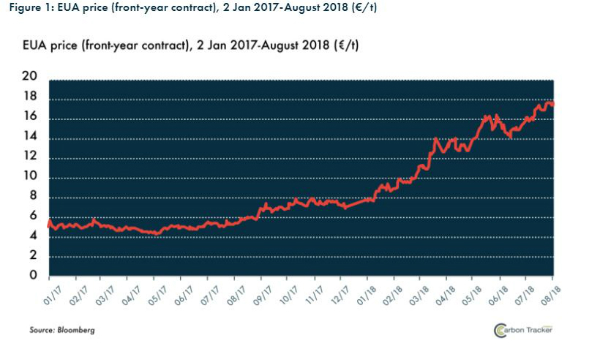 The price rice has been “driven by the market’s anticipation of the start-up from January 2019 of the Market Stability Reserve (MSR), the centrepiece of the EU-ETS reform agreed last year. With only five months to go before the MSR starts reducing the over-supply of EUAs [carbon allowances] by 24% of the outstanding cumulative surplus each year over 2019-2023, the market is now counting down to the biggest supply squeeze the EU-ETS has ever seen”, writes CTI.

In a new report, called Carbon Countdown, CTI tries “to model the amount of emissions reductions that can occur from fuel switching and energy-efficiency savings over 2019-23 if EUA prices rise to levels that flip the merit order and enable gas to run ahead of coal across the EU.”

“The logic of our argument”, writes CTI, “is that the supply squeeze caused by the MSR over 2019-23 will create a cumulative deficit for the power and aviation sectors over these five years of ~ 1.4bn tonnes, and that in order to clear the market over this period power generators will have to reduce emissions via switching from coal to gas.”

The report concludes “that in order to achieve the level of fuel-switching required to clear the market over 2019-23 it will be necessary for combined-cycle gas-turbine plants (CCGTs) with a thermal efficiency rate of 45% and above to displace coal plants with thermal efficiencies of 38% and below. With the fuel-switching price very sensitive to efficiency rates, then other things being equal this implies higher EUA prices than we imputed from our modelling in our previous report, Carbon Clampdown.”

CTI stresses that its projection for 2019-2023 is subject to many uncertainties, relating to:

CTI also notes that “it is important to remember that the EU-ETS is ultimately a political construct, and there is therefore always a political dimension to EUA prices. This is not only because of the impact of CO2 prices themselves on EU industry – after all, industry is largely protected from high prices at the moment owing to its accumulated surplus of EUAs and to the fact that it is still receiving the vast amount of its EUAs for free – but also because higher CO2 prices will raise power prices for both industry and households. Accordingly, we also provide a reminder in this report of the measures that could be taken under existing legislation – i.e. before the scheduled review of the MSR in 2021 – to smooth the impact of lower auction volumes when the MSR is at its peak over 2019-21.”

In case you are wondering what exactly the Market Stability Reserve (MSR) is about, the CTI report has a very useful infographic that sums it all up: 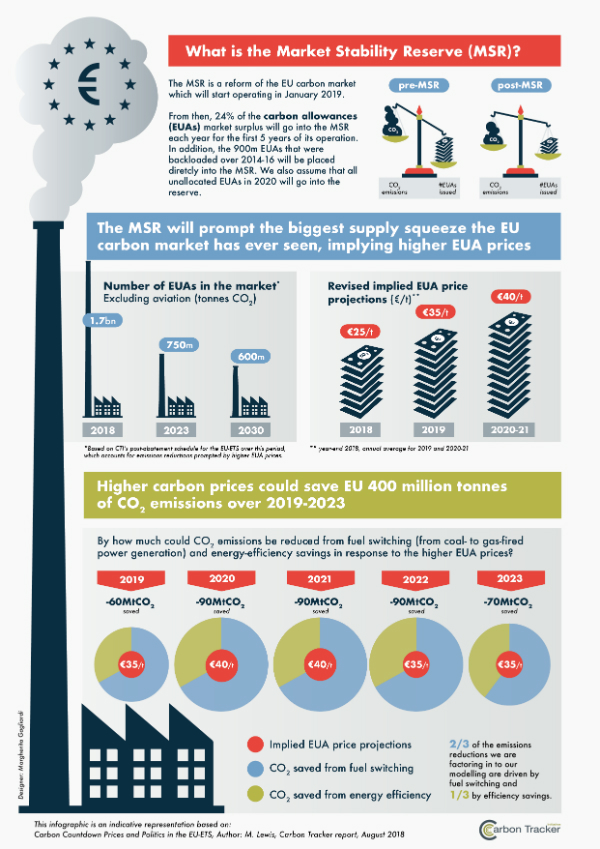 Whatever the exact amount of coal-to-gas switching that we will see, it is clear that the rising CO2 price spells trouble for the coal sector.

That is not a big surprise. The European Commission’s Joint Research Centre published a report at the end of June, on the EU coal regions, noting that around 160,000 jobs of the half million jobs may be lost in the European coal sector by 2030.

The report contains interesting facts and figures and draws some important conclusions. Here some highlights:

According to the JRC, “the retirement of coal assets should be coupled with a strategically planned and gradual industrial restructuring process, aiming to support redundant coal workers. New employment and business opportunities can be created by building on the industrial heritage of the affected regions and establishing new, competitive industries and services.”

What also will not come as a surprise is that not everyone is ready to accept the end of the coal era in Europe.

The Polish electricity industry association PKEE has reacted fairly critically to the JRC report. In a press statement released on 30 August, the PKEE notes that “The assumption of decommissioning ca. 70% of coal-fired power plants’ installed capacity in Poland by 2030 is at the same time completely unrealistic. Its fulfilment would result in a serious threat to energy supply security. This would result in the entire Polish economy having to pay the cost of implementing the decarbonisation policy.”

Overall, the European Commission’s Report “minimises the impact assessment of the negative consequences of the coal sector restructuring that will affect mainly local communities”, says the PKEE. “The Report fails to indicate well-justified proposals for remedial measures and at the same time ignores the consequences such as depopulation of coal regions as a result of migration, loss of human capital or increase in poverty. The Report leads to the conclusion that it will be local communities which will pay the most for meeting obligations, benefits of which will be distributed on a global scale. Therefore a just distribution of the costs of decarbonisation coupled with sources of financing adequate to the scale of the identified challenges should be a necessary precondition of the transformation to a “green” EU economy.”