The future of gas: the start of a new debate in Brussels

What role is there for gas in the European energy system over the next decades? Some believe the EU must give priority to coal-to-gas switching. Others see no role for natural gas at all in the long run and argue that EU policy must promote only “renewable” gas. An Energy Post panel debate in Brussels, sponsored by Nord Stream 2, saw conflicting views sound off against each other. Meanwhile, a new “Gas for Climate” initiative proposes a 10% renewable gas target for 2030. Sonja van Renssen reports on the start of a new debate in Brussels.

“Even three or four years ago, the answer of how gas contributes [to decarbonisation] would have been easy: just stop burning coal, start burning gas and you’ll be fine,” said Martin Lambert, a researcher at the Oxford Institute of Energy Studies (OIES) and former Shell manager in a keynote speech at Energy Post’s debate on the future of gas in Brussels on 27 September. “In Shell at the time we spoke about the three “A’s” – gas was good because it was affordable, available and acceptable.”

“Recently, that’s all changed,” he continued. “Post-COP21 the world needs to decarbonise.”

That Europe needs to “decarbonise” by 2050 is not being disputed. But how? How fast? And what is the role of gas during this period?

At the debate, Jonathan Gaventa, senior associate from independent climate and energy think tank E3G, put it bluntly: “If we’re aiming for zero emissions, there can be no emissions from unabated gas.” (Unabated gas meaning fossil gas without CCS.)

In other words, Gaventa suggested that EU policy should focus on phasing out natural gas at some time in the future.

Simon Blakey, a Senior Fellow at IHS Markit (formerly CERA) and ex-Special Envoy for Eurogas, disagreed strongly. He argued that switching from coal to gas in the power sector is what could really make a difference to climate change right now.

He drove this point home at the Energy Post debate with a striking example: if Germany were to switch its existing stock of lignite plants to gas, it could cut its CO2 emissions by 73 gigatonnes. That’s twice the emission reduction of the entire German power sector over the last 20 years delivered almost overnight, he said.

“We have seriously missed a trick by not doing a large coal to gas switch now.”

Blakey – and he’s far from alone on this – insists that only a coal-to-gas switch can deliver the fast, massive emission reductions that climate change demands. “The path we take to 2050 is as important or more important than the target itself,” Blakey explained. “The focus in European policy making has been far too much on flows [i.e. carbon emissions] and not enough on stocks [i.e. carbon budgets].” 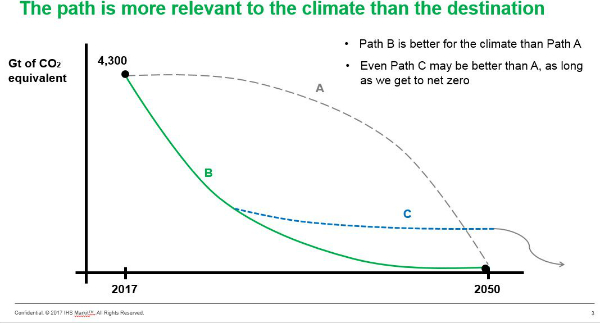 Simon Blakey argued that Europe should take path B to a zero emission energy system in 2050, implying strong effort at coal to gas switching

Gaventa agreed that getting out of coal is the number one priority, but he was not convinced that gas is the answer. “In 2015, gas was responsible for around 800 million tonnes of CO2 emissions in Europe”, he pointed out. “That represents around 25% of all fossil-fuel related emissions in Europe. Coal is definitely the biggest villain and needs to be phased out the fastest. Oil is next on the list. But gas is already having climate impacts in Europe. It’s a problem for now and not just for after 2030.”

To replace gas by renewables, as Gaventa would like to see, is not always that simple, however.

The panellists were united in acknowledging that heating – especially at high-temperature – will be tricky to electrify.

Valentin Höhn, Chairman of the Working Party Gas of the International Federation of Industrial Energy Consumers (IFIEC), argued that electrification is all very well, but also very expensive. Höhn said that energy-intensive industries are exploring options like heat pumps, but “at the moment for high-temperature processes, we can’t use renewables”.

Gas is also an indispensable feedstock for some processes, such as fertiliser production, he said. Meanwhile at low-temperatures, renewables are an option but a pricey one: “There are much higher system costs for electricity than for gas. In Germany in 2017, we paid €1.7 billion for redispatch [i.e. costs incurred by network operators to keep the system stable].”

Höhn cited the billions Germany will need to spend on transmission and distribution networks – and maybe coal companies, to compensate them for a phase-out – as reasons why the power price is likely to stay high. His conclusion: “We have to make a bet on electricity or we could use gas. For now, we are looking more to gas.”

Gas consumption has been on the rise in Europe in the last few years. After a low point in 2014, it has recovered to levels of the late 1990s (though it still remains far off its 2010 peak – see the Energy Post/Shell EUenergy App). 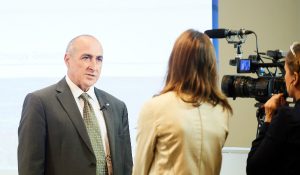 “The market demand is there. Over the past three years, with economic recovery, we’ve seen demand grow,” said Paul Corcoran, Chief Financial Officer for Nord Stream 2, which sponsored the Energy Post panel debate.

According to Corcoran, who said Nord Stream 1 is operating at virtually 100% capacity, Nord Stream 2 is on track to completion by the end of 2019.

Do we need this new gas infrastructure, given the aim of reaching a zero-emission energy system in 2050? “We do”, said Corcoran. “2050 is still 30 years away. Society needs energy during that time. Demand is growing, not shrinking. And gas, with its relatively low CO2 emissions, is an important step in the transition.”

In particular the prospect of a coal to gas switch coupled with the continuing decline in domestic gas production in the EU, particularly in the Netherlands, creates a “significant opportunity” for new gas imports, said Corcoran.

What Blakey and others would like to see in the EU is something like an emission performance standard or carbon floor price to force coal out of the picture. France and Germany are supposedly in talks about the latter (and the EU carbon price somersaulted back up to over €20 a tonne over the summer in any case). An emission performance standard is under discussion for capacity markets as part of the EU’s current negotiations on a new power market design. And ten national coal phase-outs have been announced. 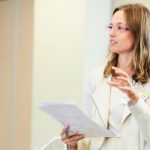 Yet even Blakey conceded that gas needs to be decarbonised by 2050. That only seems to be possible with the help of CCS (which very few people seem to be talking about in Europe at the moment) or by replacing it by “renewable gas”.

This has become an increasingly hot topic in Brussels. On 26 September, the day before the Energy Post event, , a consortium of mainly gas grid operators presented a Gas for Climate Action Plan, backed by an Ecofys report on the potential of renewable gas published earlier this year.

To get there, they propose a 10% target for renewable gas in 2030 – which would count towards the EU’s overall 32% renewable energy target – as well as “support schemes” and “fair taxation”.

The 10% target should be in the EU’s gas market reform tentatively announced for 2020, the Gas for Climate consortium suggests. The financial support should be inspired by what renewable energies have enjoyed to date, e.g. “build on best practice in offshore wind”. The Action Plan has long lists of suggestions to increase the production, transport and trade, and use of renewable gas. It was presented to EU Climate and Energy Commissioner Miguel Arias Cañete himself.

This is the start of a new debate in Brussels. Certainly the path toward renewable gas will not be easy, as Martin Lambert of OIES explained at the Energy Post debate.

There are four main routes to decarbonise gas, he said:

1) Biogas and biomethane, produced via anaerobic digestion. This is the only route that already has some “materiality”, Lambert said. There are about 20,000 biogas plants in Europe, half of those in Germany (even if biogas makes up just 1% of total primary energy consumption in Europe). Most of this gas doesn’t affect the grid since it’s used locally.

2) A similar end-product but produced using a fundamentally different route: gasification. This works at industrial scale, but unlike anaerobic digestion, hasn’t yet been widely rolled out. There are just a “handful” of pilot plants in for example Austria, Sweden and the UK. In other words, a technology that “shows good promise but hasn’t yet delivered”.

3) Power-to-gas (P2G) is “really interesting”, said Lambert. This is sector coupling: you use electrolysis to make hydrogen for the gas grid, transport, power production (helping balance the grid), or methanisation (to produce (bio)methane).  Unlike for biogas, there is no feedstock constraint. P2G could be a big deal, Lambert believes, but is still in its infancy.

4) Hydrogen production through methane reforming with carbon capture and storage (CCS). This is what Brussels calls “blue” hydrogen. There are several UK projects (e.g. Liverpool/Manchester, Leeds) to do this, with CO2 storage in old oil and gas fields. The hydrogen is sold to industrial users and the grid. For Lambert this is quite a “UK-centric” phenomenon, also because of limited opportunities for CO2 storage elsewhere.

The Oxford researcher estimates that the long-term potential of biomethane is about 10% of current EU gas demand, or 50 bcm. The most optimistic forecasters predict twice that by 2050, Lambert added. P2G could ultimately supply more, he believes, but it’s hard to know with the technology still so early-stage today.

What’s clear is that we are a very long way from replacing all the natural gas with “green” gas in the European energy system. France’s vision for 100% green gas by 2050 – a third each of options 1, 2 and 3 above – is exactly that, “a vision rather than a plan”, in Lambert’s view. He sums up: “In a way we see too much choice at the moment and not yet a clear pathway of how that comes together.”

What is more, not everyone is enthusiastic about renewable gas. A representative of NGO Friends of the Earth showed himself sceptical at the Energy Post debate: “Our concern is that the promise of renewable gas in the future would be used to justify investments in fossil fuel infrastructure today,” he said.