Lithuania is committing itself to renewable energy in a significant way, which could help shift the way other Eastern European countries define their interests in the energy sector. The EU is signalling its strong willingness to support countries that follow Lithuania’s lead, says political analyst Joe Mitton. Crucial decisions on the EU’s Modernisation Fund will be made in the coming months, allocating spending in the ten lower-income EU Member States.

The scale and ambition are impressive. Lithuania plans to double its domestically-produced renewable energy output to 38 percent of its energy mix by 2025 and reach 45 percent by 2030. By 2050 it plans to reach 80 percent of energy renewables (100 percent if you exclude the electricity market). A €385 million fund is a significant investment for any country. For Lithuania, with a GDP of under €50 billion and a population of just 2.8 million, it is phenomenal.

New projects which use renewable sources such as solar, wind and hydro will receive grants, in amounts to be determined through competitive auctions. The grants will help bridge the gaps between the market prices for energy and the costs of producing it with renewable sources. While the programme rewards energy production, not research, it will no doubt spur private-sector investment in R&D and could help make Lithuania a leading source of new technologies.

Committing almost one percent of the country’s annual GDP to a project needs widespread support. “There is political and societal support for this”, says Vice-Minister Kėvelaitis, noting that the National Energy Independence Strategy was approved with cross-party support in parliament last year.

The concept of “energy independence” clearly carries weight in this country with a long history of resisting domination by foreign powers. In this respect, the move to renewables can be seen as much a foreign policy objective as it is an economic and energy policy objective. Kėvelaitis notes that two-thirds of Lithuanian electricity is imported, a level matched only by Luxembourg in the EU. With the closing of the Ingalina nuclear power plant in 2009, imported electricity spiked up. A government report in 2015 showed that Lithuania had approximately halved its dependence on Russian gas but remained heavily dependent on electricity from other EU nations.

Asked if Lithuania plans to take a regional leadership role in the renewables market, Kėvelaitis replies diplomatically that each national situation is different. (Unlike neighbouring Poland, Lithuania has virtually no coal sector, making this transition politically easier for Vilnius). But he does admire the ambition for renewable energy development in Germany and Denmark and says that Lithuania could be an example in Central Europe. He notes that within ten years, his country managed to increase the share of domestic biomass for central heating systems from 30 percent to 70 percent. 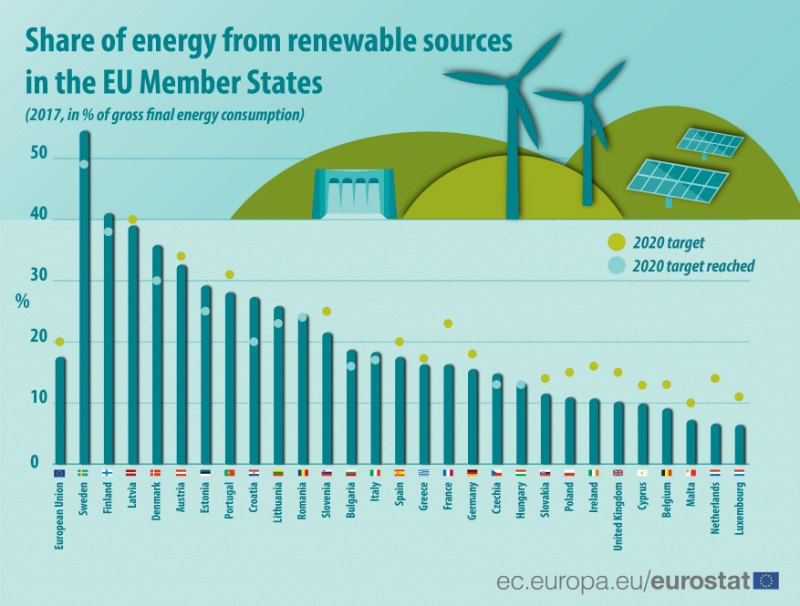 The industry body, WindEurope, welcomed the ambitious Lithuanian targets. WindEurope’s Head of Advocacy Viktoriya Kerelska said, “there’s 9 GW of offshore potential in the Baltic Sea that can easily be exploited by 2030. The National Plans process this year gives Lithuania and its neighbours the opportunity to work on a regional scale and pin down concrete offshore deployment targets and measures to exploit their common resource in the Baltic.” She also called for the auction schedule to be incorporated in Lithuania’s National Energy & Climate Plan to give legal certainty for investors.

Wind and solar: costs are falling

WindEurope’s positivity was echoed by Aistis Radavičius, Executive Director of the Lithuanian Wind Power Association, who said, “the Lithuanian Wind Power Association views this as a clear signal for project developers and investors that the Lithuanian wind energy market is stable”. He added that “so far Lithuania focuses on developing onshore wind energy projects and offshore projects are not yet included in the support scheme. There is still a need for explicit research and clear legislation before we can expect offshore wind parks in the Baltic Sea. It might take up to a couple of years to start these developments”.

It would seem that onshore wind projects are best placed to take advantage of this scheme, at least in the short-term. But Vice-Minister Kėvelaitis says that the fund is neutral regarding the types of renewable sources. “Its difficult to forecast [which sources will dominate] but […] the main competition will be between onshore wind and solar”. The Vice-Minister says, “the price of renewables has been significantly reduced in recent years”, adding later that “there may be a subsidy-free energy market in the following decade”.

Thumbs up from the EU

The European Commission is clearly proud of Lithuania’s commitment to renewables, and it ruled that the scheme abides by EU regulations. EU State Aid rules generally prohibit market-distorting subsidies, though in 2014 the Commission clarified the way incentives can be used in the energy market to achieve environmental goals.

This is not the first time the European Commissioner for Competition Margrethe Vesager has ruled in favour of cleaner energy incentives in Europe’s East. Earlier this month a €5 billion Polish scheme to promote high-efficiency cogeneration of electricity was also approved. In January Vesager approved a €36 million Polish subsidy for electric vehicle battery production. (The Commissioner is not always so accomodating for other sectors – for example, she has ordered the UK to recover tax incentives given to foreign tech companies, even as the UK prepares to leave the EU).

As noted earlier, Lithuania is free from some of the thorny political issues that nearby countries face with energy transition. Poland, with 60 percent of its energy from coal, and entire communities dependent on coal-mining jobs, has to balance political pragmatism with its EU and international commitments on carbon reductions. The Czech government is in a similar position.

Nevertheless, Lithuania’s special way of understanding of energy security is worth noting by other countries. Greater energy independence has become a whole-of-government goal, indeed a national goal that largely seems to transcend ordinary political debate. The Latvian and Estonian economies are in a good position to complement and support the renewable revolution in Lithuania. Just outside the EU, the idea of investing in renewables seems particularly apt for Ukraine, which worries about its dependence on gas from an antagonistic Russia.

There are also lessons to be drawn from the way the European Commission has supported these policy aims. The Commission is now more joined-up in promoting its environmental aims through all directorates, including the competition authority. When the next set of Commissioners takes office on 1 November this year, Eastern European governments should use the Lithuanian example to lobby aggressively for support for their own clean energy initiatives.

The €100 billion Horizon Europe fund for research and innovation will be a windfall for developers of clean energy technologies in the next five years. But countries already strong in those technologies, such as Germany, are best placed to win this funding. Eastern European countries may not all be technology leaders, but they can be large-scale convertors to renewable energy.

Spending decisions for the EU’s Modernisation Fund will begin to be made from the middle of this year. The fund, administered under the Emissions Trading Scheme, targets the ten lower-income Member States – all except Greece and Portugal are in the former-Communist East of the continent. Decisions will be made about what kinds of projects will count as “modernisations”. (Some will argue for example that switching from coal to gas is modernising, but that would be a far cry from modernising to renewables). This presents a key opportunity for governments to secure funds for projects that best suit their national energy circumstances and their economic strategies.

Lithuania has shown that under the right conditions, Eastern European countries can make seismic shifts in their energy policies. But strong political will, and a change in the understanding of energy security, will be needed first.