TurkStream – how is it progressing?

This consists of two strings with a capacity of 15.75 bcm each (to compare: the Nord Stream 2 pipeline will be 55 bcm). The first one has already been laid and will become operational in 2019. It will deliver gas to Turkey for the Turkish market. 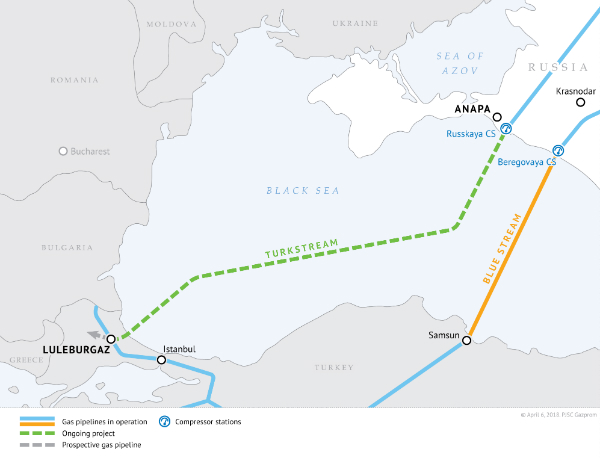 The second string, however, is intended to deliver gas through Turkey to Europe.

But how will it connect with the European network? In an in-depth article for Natural Gas World, Charles Ellinas discusses the various options that are possible. 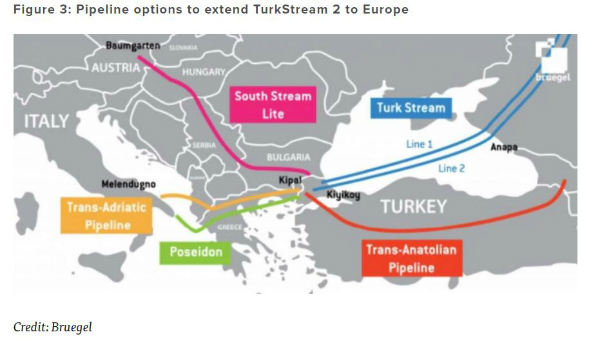 The map above shows the most likely possibilities. But much is still uncertain.

Ellinas quotes Gokhan Yardim, CEO of Botas, the Turkish gas pipeline operator, as saying in June at a conference in Thessaloniki that TurkStream 2 “could be connected to the existing pipeline interconnecting Turkey and Greece. This is operating at a low 6bn m³/yr capacity, but the designed capacity is 10bn m³/yr. So there is capacity in the existing pipeline that can be used.”

“He also said that Gazprom is investigating the possibility of using the Interconnector Turkey-Greece-Italy (ITGI), also known as the Poseidon pipeline, which lost the race for Azeri gas to the Trans Adriatic Pipeline (TAP). He added: ‘My feeling is that some of the gas will go to Greece and some will go to Bulgaria. But what’s important is the interconnecting lines’.”

There is also the option to use TAP, notes Ellinas. “Even though its current capacity is 10bn m³/yr, it can be expanded to 20bn m³/yr by adding compressor stations.”

In accordance with EU’s internal gas market rules this additional capacity would be open to third-party access. “Gazprom would have the right to bid for and use this capacity”, notes Ellinas. “But this would of course defeat the original purpose of the pipeline, which was to deliver non-Russian gas to Europe. However, should Gazprom decide to proceed with this, it will be difficult to stop.”

Another route “through Bulgaria could link to Austria’s Baumgarten gas hub through Serbia and Hungary, by following the original route of the cancelled South Stream. This was confirmed in January by Alexander Medvedev, deputy chairman of Gazprom’s management committee, when he said that Gazprom is considering various options to bring natural gas to Europe through TurkStream’s second string, including using Austria’s Baumgarten gas hub. The hub receives about 40bn m³/yr gas for redistribution in Europe.”

Another option could be a partly new route, called Greek Stream, an idea that “first appeared in September last year, following the Greek-Italian Cooperation Council ‘first bilateral intergovernmental conference’ in Corfu. This was concluded with a joint declaration, signed by Greece’s energy minister, Giorgos Stathakis, and Italy’s minister of economic development, Carlo Calenda. That statement made a specific reference to the ‘development of a new diversified route for the transport of Russian gas through the IGI Poseidon pipeline and the extensions of the natural gas transmission systems of Greece and Italy”, dubbed by the Greeks as the ‘Greek Stream’.”

Italy, notes Ellinas, “has been promoting IGI Poseidon intensively since 2017 as it sees it as vital for its energy efficiency. The argument made repeatedly by Italy to the EC and others is that TurkStream and IGI Poseidon will not increase Russian gas presence in Europe. Its purpose is simply to replace the Russian gas route to Italy from the north with a more economical southern route.”

In March 2017, Gazprom and Eni signed a memorandum of understanding to develop the southern corridor for gas supplies to European countries, including Italy, writes Ellinas. “Later, at a meeting with Russia’s energy minister Alexander Novak in June 2017, Calenda confirmed that Italy and Russia were working closely together for energy security. He said: ‘We feel it is important to have South Stream which you know was somehow halted, but which should be re-launched soon’.”

Novak said in August 2017 that “Russia is ready to supply gas through the TurkStream pipeline to Greece and Bulgaria. He added: ‘We are constantly discussing these issues with countries interested in receiving Russian gas such as Greece and Italy. Bulgaria is now again part of the initiative to make supplies through its territory.’ In fact, Bulgaria confirmed its readiness to receive gas from TurkStream in July 2017. Hungary also signed an accord with Gazprom in July 2017 to link into TurkStream.”

It should be clear from all this that EU member states in southeastern Europe have no intention to “boycott” Gazprom – as some people in Washington seem to believe. Nor is it likely they will oppose Nord Stream 2 – that would be difficult to justify given their efforts to make their own deals with Gazprom.

What about the European Commission? Ellinas notes that TurkStream replaces South Stream, a pipeline first proposed by Gazprom in 2007 to transport gas through the Black Sea to Bulgaria and from there to Austria through Serbia and Hungary. South Stream was cancelled “following controversy owing to non-compliance with EC competition law on tendering for pipelines”.

The Commission cannot stop Turkstream itself, but it can put requirements on the use of the network inside the EU. Ellinas quotes gas expert Jonathan Stern, founder of Oxford Institute of Energy Studies (OIES) Natural Gas Research Programme, as saying, back in February, “that the European sections of TurkStream 2 and Nord Stream 2 can be realised with an understanding from the European Commission (EC) to include a deal on Ukraine.”

Stern said: “The EC will want some kind of concession from Gazprom on a related issue, perhaps on the Nord Stream 2, or perhaps on Ukraine. But the key thing for TurkStream’s second line is that the gas may need to reach EU countries through other pipelines. If TAP is not fully utilised, then some Russian gas could go through TAP… There are lots of different options but this cannot be done except with an understanding with the EC, which I think will have to include an understanding on Ukraine.”